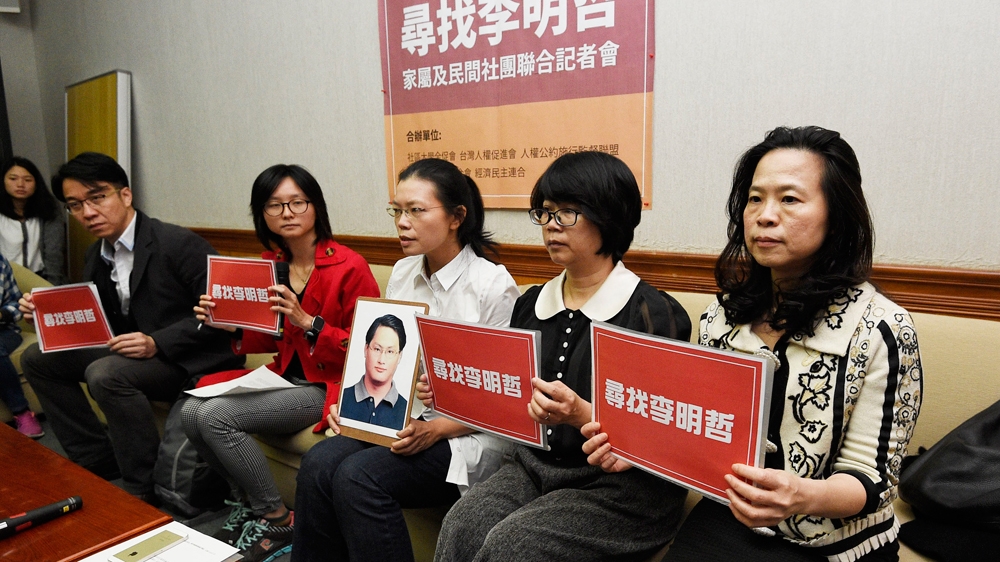 Lee Ming-che, who disappeared in 2017 and was later convicted of ‘subverting state power’, spent five years in prison.

Taiwanese human rights activist Lee Ming-che has returned to Taiwan after serving a five-year jail sentence in China for alleged crimes against the state.

Lee’s return to Taiwan on Friday comes about five years after he disappeared in March 2017 while travelling to Macau, a former Portuguese colony and semi-autonomous Chinese territory next to Hong Kong.

A week after his disappearance, China confirmed he was being held and was under investigation on suspicion of “pursuing activities harmful to national security”. Lee’s family and several Taiwanese NGOs advocated for months for more information about his whereabouts and other details of his detention.

Lee eventually stood trial in 2017, and pleaded guilty to “subverting state power”, a charge that is frequently used against human rights activists and lawyers. During his trial, Lee confessed to criticising the Chinese Communist Party online and promoting a Taiwanese-style democracy for China, according to the Reuters news agency. He was sentenced to five years in prison and completed his term this week.

Lee was reportedly forced to eat spoiled food, and denied warm clothing, she said, while prison officials restricted communication with his family. Following the outbreak of COVID-19 in China, his wife was also denied the right to visit more than a dozen times.

Lee’s case is unusual because the families of people detained in China on similar grounds are often reluctant to speak to the media or international NGOs for fear of repercussions.

His case echoes that of five Hong Kong booksellers, who disappeared in 2015 only to re-emerge in Chinese detention. One bookseller was kidnapped while travelling in Thailand.

Chiu said it was uncertain how many similar cases existed of Taiwanese activists and citizens detained in China, and urged the Taiwanese government to carry out a systematic investigation.

After arriving in Taiwan, Lee will now undergo 10 days of mandatory quarantine before he can return home.

China claims sovereignty over Taiwan, a self-ruled democracy, and its 23.5 million citizens.

Relations between China and Taiwan, while always tense, have soured since the 2016 election of President Tsai Ing-wen, who has represented Taiwan as a de facto state to the international community.