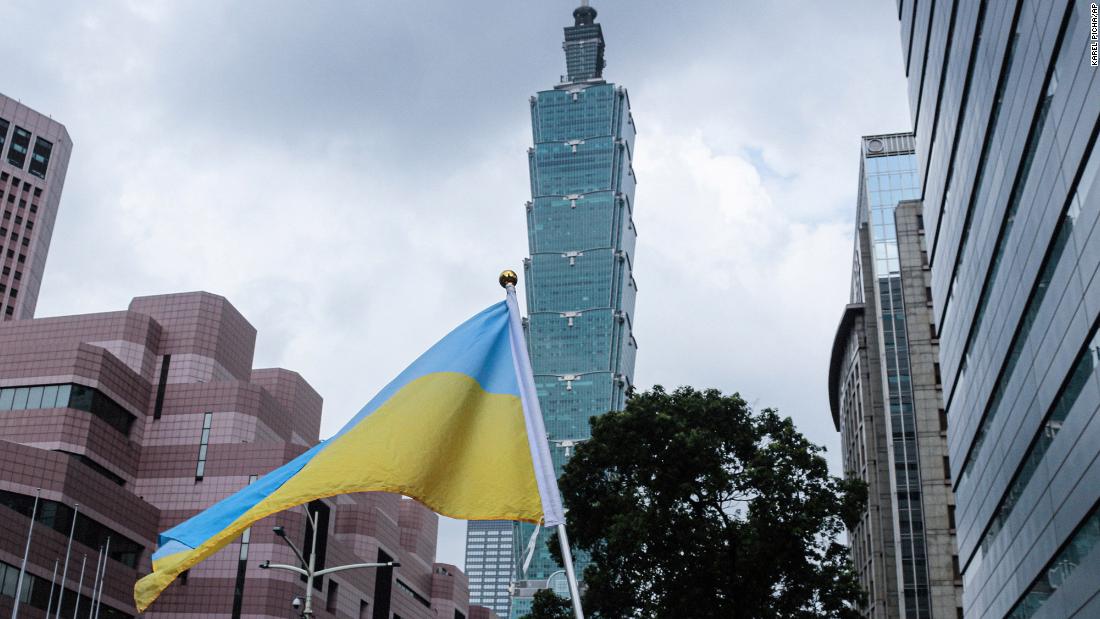 Taiwan watches China as China and the world watch Ukraine

China is closely watching the events in Ukraine to evaluate its own strategy towards Taiwan, the island's foreign minister has warned.

"When we watch the events in Ukraine evolving ... we are also watching very carefully what China may do to Taiwan," Joseph Wu said during a press conference Monday.

Some analysts have pointed to parallels between Russia's designs on Ukraine and fears over the future of Taiwan -- a self-governing island democracy that Beijing claims as its own and has not ruled out taking by force.

"The danger will be that the Chinese leaders think that the Western reaction to the Russian aggression is weak and not coherent, and not having any impact.

The Chinese might take that as a positive lesson," added Wu while discussing additional steps that Taiwan is taking to help Ukraine.

Asked if he is concerned the crisis in Ukraine makes it more or less likely China will make a similar move, Wu said the world has seen an "expansion of authoritarianism," pointing to the joint declaration issued by China and Russia last month.

"President Xi Jinping has also spoken about the rejuvenation of the Chinese nation, including building up militarily around China," Wu said.

Wu's comments Monday echoed remarks he made in an interview with CNN last year in which he characterized Taiwan as a check on China's ambitions.

"It's about Chinese authoritarianism trying to expand its own influence ... Far beyond its borders, even into the Western hemisphere," Wu said in June 2021.

On Monday, Ukrainian President Volodymyr Zelensky warned Western governments that Russia's war will not stop at the borders of his country -- and an attack on freedoms in Ukraine will affect the rest of the world.

"We are in this zone of freedom. And when the limits of rights and freedoms are being violated and stepped on, then you have to protect us. Because we will come first. You will come second," Zelensky told ABC News.

Zelensky called on NATO and the West to provide greater support to Ukraine, which has received a surge in military aid in recent weeks, including anti-aircraft and anti-tank missiles.

It's the kind of support the US has been supplying to Taiwan for decades under the Taiwan Relations Act, which assures Washington will help arm the island in the face of possible military aggression but does not commit it to actually defending the island, like it would with its treaty allies in NATO or Japan or
Australia.

But Wu, Taiwan's foreign minister, on Monday noted that democracies around the world have come together in support of Ukraine. "I'm sure that will be a factor for the Chinese to take into their calculus," Wu added.

China has made clear its supports Moscow's call to curtail NATO expansion, with analysts noting it sees parallels with the organization's European footprint and the increasingly joined up approach of US allies in Asia -- with Wang, the Chinese foreign minister, on Monday denouncing Washington's strategy of establishing "an Indo-Pacific version of NATO" aimed at maintaining "the US-led system of hegemony."

"(China and Russia) share two primary strategic interests," said Steve Tsang, director of SOAS China Institute at the University of London. "One is to take the American global leadership down a notch or two. The second is to make the world safe for authoritarianism."

Beijing has dismissed comparisons between the situation in Ukraine and its own claims on Taiwan, with Wang reiterating on Monday that "Taiwan is an inalienable part of China's territory, and the Taiwan question is entirely China's internal affair."

Taiwan, meanwhile, has made sure the world knows it stands with Ukraine. Taiwan President Tsai Ing-wen has said the island could "empathize" with Ukraine's situation given its experience with "military threats and intimidation from China."

Among the demonstrators were Ukrainians living in Taiwan and Taiwanese lawmakers. They waved Ukraine and Taiwan flags, and held placards reading "no war" and "Taiwan stands with Ukraine."

But in the Pacific, it may matter more who stands with Taiwan. And there analysts note that the dynamic is considerably different.

"If China were to gain control of Taiwan, this more than anything else would help it establish regional hegemony. Chinese leaders understand that to the United States the stakes are different and its response would likely be very different," said David Sacks, a research fellow at the Council on Foreign Relations in New York.

Key to that may be the stance of one of Washington's most important military allies, Japan.

The country has taken a firm line on Taiwan in recent years, noting the situation surrounding the island is important for Japan's security, according to a government defense white paper released July.

In an interview with CNN last year, Japanese Defense Minister Nobuo Kishi made clear the connection. "What's happening in Taiwan is directly linked to Japan," he said, noting the island sits astride his country's "energy lifeline."

"Ninety percent of energy that Japan uses is imported through the areas around Taiwan," Kishi said.

"What could happen in Taiwan could likely be an issue for Japan, and in that case, Japan will have to take the necessary response to that situation," Kishi said.

Chinese Foreign Minister Wang on Monday reminded Tokyo of the sensitivity and importance of Taiwan in China-Japan relations, calling the issue "foundational" to mutual trust.

"If the foundation is shaken, whatever above it cannot stand," he warned. "We hope that Japan will honor the series of solemn commitments ... to avoid serious disruption to our bilateral ties in the future."