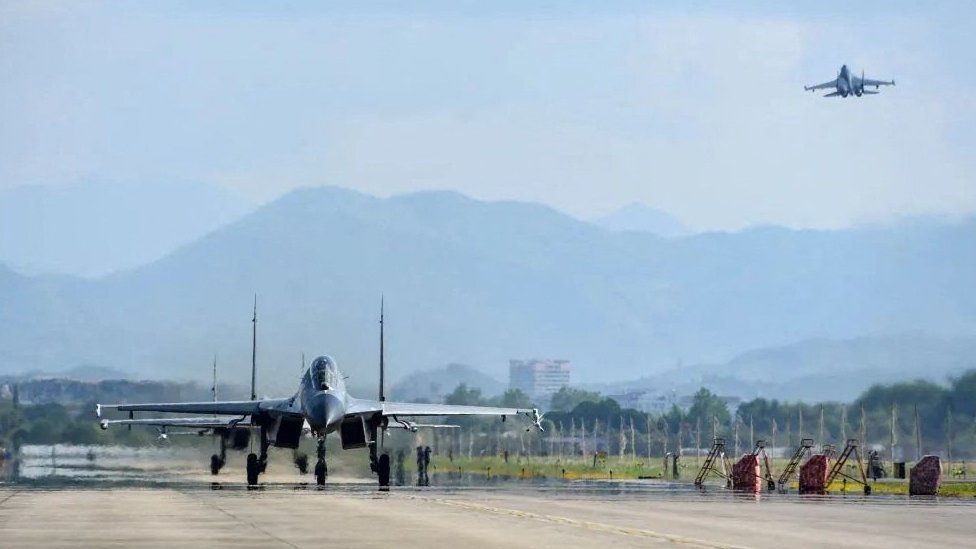 Taiwan tensions: China halts co-operation with US on key issues

China is halting co-operation with the US in several key areas including climate change, military talks and efforts to combat international crime.

The new measures follow a trip to Taiwan by a US congressional delegation led by senior Democrat Nancy Pelosi.

China, which also announced it was sanctioning Ms Pelosi and her family, views the visit as a challenge to its claims of sovereignty over Taiwan.

The self-ruled island sees itself as distinct from the mainland.

The measures were announced by China's foreign ministry on Friday. It said dialogue between US and Chinese defence officials would be cancelled, while co-operation on returning illegal immigrants, climate change, and investigating international crime would be suspended.

The two major powers have maintained cordial diplomatic ties on the need to combat climate change in recent years. At last year's climate summit in Glasgow, China vowed to work "with urgency" with the US to cut emissions.

The countries have also found rare common cause on efforts to fight the trade of illegal drugs such as fentanyl.

The decision to halt co-operation was taken because Ms Pelosi visited Taiwan "in disregard of China's strong opposition and serious representations," the Chinese ministry said in a statement.

It also accused the US delegation and Ms Pelosi - who is the highest-ranking US politician to travel to the island in 25 years - of "egregious provocations".

"We'll continue our efforts to keep open lines of communications with Beijing, while defending our interests and values," she said.

A new low in relations

There can be few clearer examples of just how far, and how fast, the international political landscape is shifting. The statement from Beijing marks a new low point in the defining strategic relationship of our time.

The consensus, just a few years ago, was that an established superpower should build strong trade and investment ties with a newly emerging one. The ideological differences would then fade away.

Instead, while China has indeed become the factory of the world, deeply integrated into global supply chains, it has grown more authoritarian at home and more assertive abroad.

A 1997 trip to Taiwan by then US House Speaker Newt Gingrich, for example, was met with little opposition.

The Nancy Pelosi visit has been met with missiles - flown directly over a democracy and the heads of its 24 million people - whose appetite, by the way, for China's vision for unification dwindles ever further the more authoritarian it becomes.

And now, any American citizen worried about the impact of Chinese precursor chemicals - sold into Mexico and then turned into the fentanyl that is fuelling thousands of US deaths - will also feel the impact of these shifting geopolitical plates.

China's "shared future for mankind" messaging on climate change is similarly put on ice, now seemingly held hostage to the precondition that its claims to Taiwan be recognised.

Nancy Pelosi may have given China the pretext. But this is a shift that was already well under way. The battle over values is front and centre stage once again, and the profound challenges it presents for the existing global order are likely only to increase.

Although the US does not officially recognise Taiwan, it maintains strong relations with the island - which includes selling weapons for Taiwan to defend itself.

Ms Pelosi is currently in Japan on the final leg of an Asia tour, and said on Friday that China "will not isolate Taiwan by preventing us to travel there".

Speaking to the BBC, Taiwan's Foreign Minister Joseph Wu defended the visit which he said would "raise the profile of Taiwan and... allow the international community to understand that Taiwan is a democracy".

He also condemned the large-scale military exercises that China began around the island on Thursday in response to Ms Pelosi's visit.

Beijing is currently holding military drills in the air and seas around the island and these are expected to continue until Sunday.

More than 100 warplanes and 10 warships have taken part in the live-fire exercises, with many apparently crossing the unofficial buffer zone between China and Taiwan.

At least one ballistic missile has flown directly over the island, according to Chinese state media.

Taiwan's foreign ministry has not confirmed or denied whether that is true, but it condemned the ongoing drills as "highly provocative acts".

US Secretary of State Antony Blinken added on Friday that there was "no justification for this extreme, disproportionate and escalatory military response".

In a statement, National Security Council strategic communications co-ordinator John Kirby said the White House had made it clear that the US "is prepared for what Beijing chooses to do. We will not seek and do not want a crisis."

China and Taiwan: The basics

*  Why do China and Taiwan have poor relations? China sees the self-ruled island as a part of its territory and insists it should be unified with the mainland, by force if necessary

*  How is Taiwan governed? The island has its own constitution, democratically elected leaders, and about 300,000 active troops in its armed forces

*  Who recognises Taiwan? Only a few countries recognise Taiwan. Most recognise the Chinese government in Beijing instead. The US has no official ties with Taiwan but does have a law which requires it to provide the island with the means to defend itself