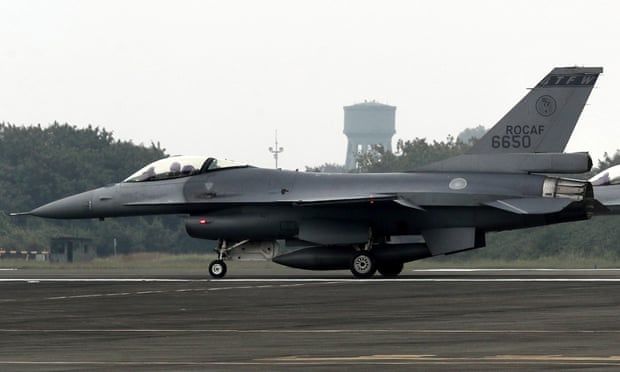 The island’s air force announced earlier that an F-16 fighter jet went missing over the sea off western Taiwan on Tuesday afternoon, 30 minutes after it took off from the southern Chiayi air base for routine training.

President Tsai Ing-wen issued instructions to “spare no efforts” in the search and rescue mission and “to further clarify the cause of the accident”, her spokesperson said.

Last week, Taiwan launched a three-day drill to show its battle readiness amid heightened military tensions with China, which claims the island as its own and has not ruled out using force to unite it with the mainland.

On Tuesday, in investigating the latest incident, the island’s rescue command centre said witnesses had seen the aircraft crash into the sea and helicopters and ships were searching for the pilot.

The air force inspector-general, Liu Hui-chien, said the aircraft had only recently been upgraded to the “V” version, with new weapons systems and avionics.

Combat training for the F-16 fleet had now been suspended, he added.

In November 2020, Taiwan grounded all its F-16 fighter jets for safety checks after a single-seat F-16 flown by a 44-year-old pilot disappeared from radar at an altitude of 6,000ft (1,800 metres) two minutes after taking off from Hualien air base in eastern Taiwan.

Less than three weeks before that incident, a pilot was killed when his F-5E fighter jet crashed into the sea during training, prompting a similar grounding.

Last year, two F-5E fighters, which first entered service in Taiwan in the 1970s, crashed into the sea off the south-east coast after they apparently collided in midair during a training mission.
Add Comment