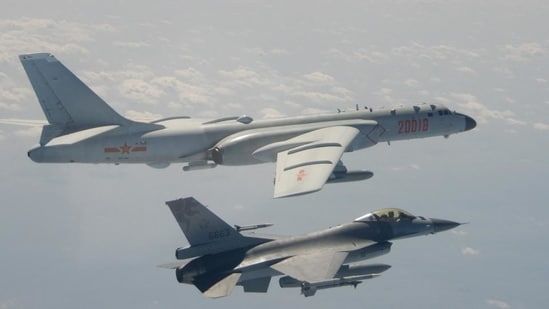 China sent the biggest number of warplanes close to Taiwan since October on Sunday after a U.S. lawmaker defied a Chinese demand that she abandon a trip to the island.
Twenty-seven Chinese aircraft, including 8 J-16 fighter jets, entered Taiwan’s southwest Air Defense Identification Zone, according to a statement from the Ministry of National Defense. The air force issued radio warnings and deployed air defense missile systems as it monitored the planes.

The defence ministry said Taiwan scrambled combat aircraft to “warn” the Chinese planes to leave. It also deployed missile systems to monitor them.

The Chinese aircraft flew into Taiwan’s air defence identification zone near the southern part of the island and out into the Pacific Ocean before returning to China, according to a map by Taiwan authorities.

It’s the largest deployment of Chinese warplanes since a record 52 aircraft were detected close to Taiwan in early October.

This comes after a US lawmaker defied a Chinese demand that she abandon a trip to the island. Elissa Slotkin, a Democrat from Michigan, wrote on Twitter after landing in Taiwan Thursday that her office received a “blunt message” from the Chinese embassy to call off the trip. The trip also includes Japan and South Korea.

Over the past year, the frequency of Chinese incursions has increased, with about 150 aircraft over a period of four days. China’s air force mission toward Taiwan came as Chinese President Xi Jinping met with officers at a military conference, where he called for military talent cultivation to support and strengthen the armed forces, according to state-owned news agency Xinhua.

Xi said that talent is imperative in achieving victory in military competition and gaining the upper hand in future wars, according to Xinhua.

China claims democratically ruled Taiwan as its own territory, to be brought under its control by force if necessary. It refuses to recognize the island’s government and has increasingly sought to isolate the independence-leaning administration of President Tsai Ing-wen.
Add Comment