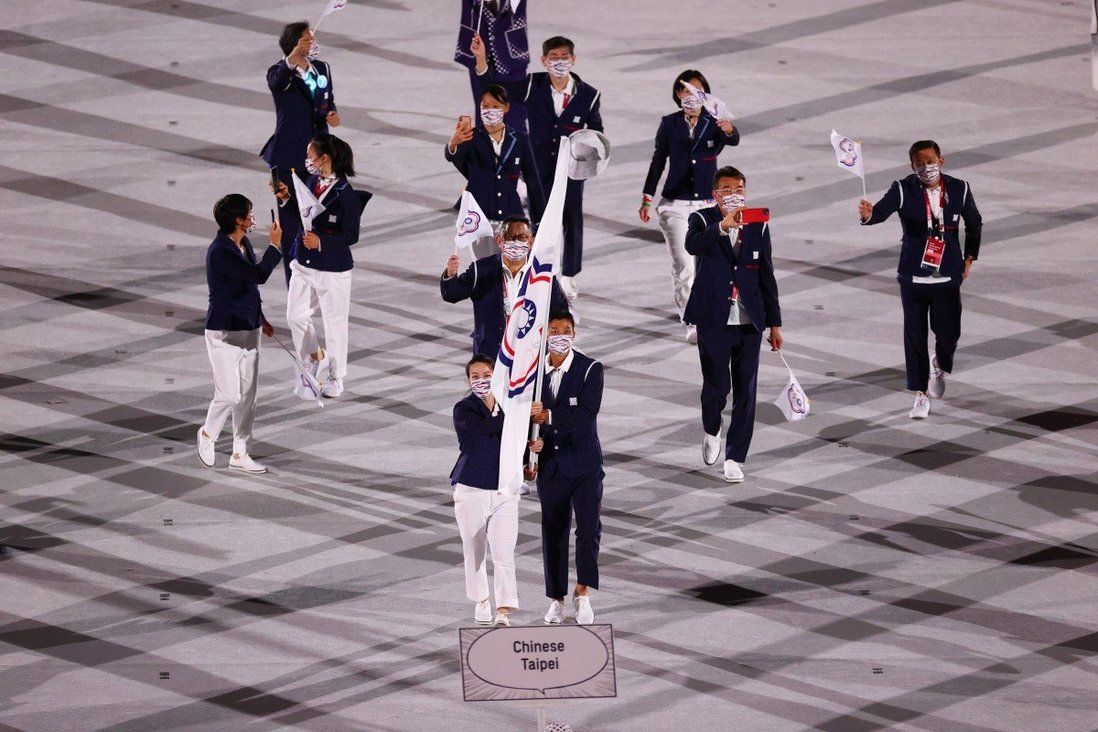 Taiwan’s official name at the Olympics became a source of heated debate over the weekend as Japan’s national broadcaster omitted to introduce its athletes as being from “Chinese Taipei” during Friday’s opening ceremony.

Instead, NHK’s anchor called the team “Taiwan”, a taboo word China has bristled over in the past given a long-standing agreement between the two over the naming convention for the self-ruled island’s participation in such international events.

Commentators in Taiwan, including President Tsai Ing-wen, immediately seized on the moment to express happiness.

Tsai thanked Japan for being a “good neighbour”, underlining the warming ties between the island – which China considers a renegade province – and Tokyo.

Without referring to the incident, Tsai wrote on Facebook after the opening ceremony: “There is no challenge large enough that could shake off the power of sports and the value of the Olympic Games. Thank you to the host country, Japan, for making everything possible.

“No matter how huge the challenge, it will not stop Taiwan from being a member of the world. The moment when flag bearers [tennis player] Lu Yen-hsun and [weightlifter] Kuo Hsing-chun entered the stadium was when Taiwan stood on the world stage. We all felt proud.”

Taiwanese legislator Claire Wang Wanyu described it on Facebook as a touching moment.

“I hope there comes a day when we can enter the stadium as Taiwan,” she wrote.

The self-ruled island has been taking part in international bodies and sporting events under the label Chinese Taipei, including the World Trade Organization and the Olympic Games. Seen as a humiliating name, Taiwan has accepted it as a compromise to secure international recognition.

At the opening ceremony, Taiwan marched out as the 104th delegation, and was introduced in English and the captions as Chinese Taipei. But the public broadcaster NHK referred to the team as Taiwan in Japanese.

“As a public television station in Japan, NHK should be responsible as it broadcasts live images of the Olympics to the world. We cannot indulge any acts of it that undermines the ‘one China’ principle,” the editorial read.

It went on: “A joint effort is needed to combat Japanese forces who are attempting to take advantage of the Olympics to engage in political conspiracies. The Olympics is a holy stage. All dirty tricks need to be kicked out of it.”

It remained unclear if the naming at the opening ceremony was intentional. The Post reached out to the IOC, who redirected the queries to the Tokyo 2020
organisers.

Beijing and Taiwan battled for decades for the IOC to recognise their delegations as the sole representative of Greater China. A compromise was made in 1981, following the Nagoya Resolution where Taiwan agreed to compete under Chinese Taipei, and use a new emblem and flag.

The order in which the Taiwanese delegation marched into the Olympic Stadium, known as the Parade of Nations, also triggered heated discussion.

Instead of being in the queue for the Japanese character ‘chi’ – the first letter for Chinese Taipei – it went by ‘ta’ and came in before Tajikistan. It was not immediately clear if the order was sorted by the name Taiwan, or Taipei.

While seen by some as a breakthrough, Taiwan had previously marched in under T before, including at the 2012 and 2016 Olympic Games. In 2008, when Beijing hosted the Games, the parade order was sorted by the number of strokes in the first character of the name.

The Global Times’ editorial also took aim at NBC Universal for showing an “incomplete” China map at the opening ceremony, echoing criticism first issued by the Chinese consulate in New York on Saturday.

Comcast-owned NBC displayed a map upon the arrival of the Chinese delegation that did not include Taiwan, a move that the consulate said angered online users.

“The map is an expression of the national territory, symbolising national sovereignty and territorial integrity,” the Chinese consulate in New York’s statement read. “We urge NBC to recognise the serious nature of this problem and take measures to correct the error.”

Chinese online users were less bothered by the name slip at the opening ceremony and instead were enraged at the map.

They also lashed out at Tencent Video for a broadcasting error during Friday’s event. The live broadcast stopped abruptly when the Taiwanese delegation arrived, causing it to miss out on airing the Chinese team’s entrance six places behind.

“The whole internet is dissatisfied with this, why was a talk show aired when the Chinese team was about to enter? Tencent, please explain this, most netizens are calling to uninstall the application,” wrote one user on Weibo.

“Tencent did a live broadcast of the Olympic opening ceremony last night, as did many other providers, but it exceeds the copyright use allowed. At 8.43pm, we were asked to stop the live broadcast. We sincerely apologise for the poor experience brought to everyone,” it said in a statement.