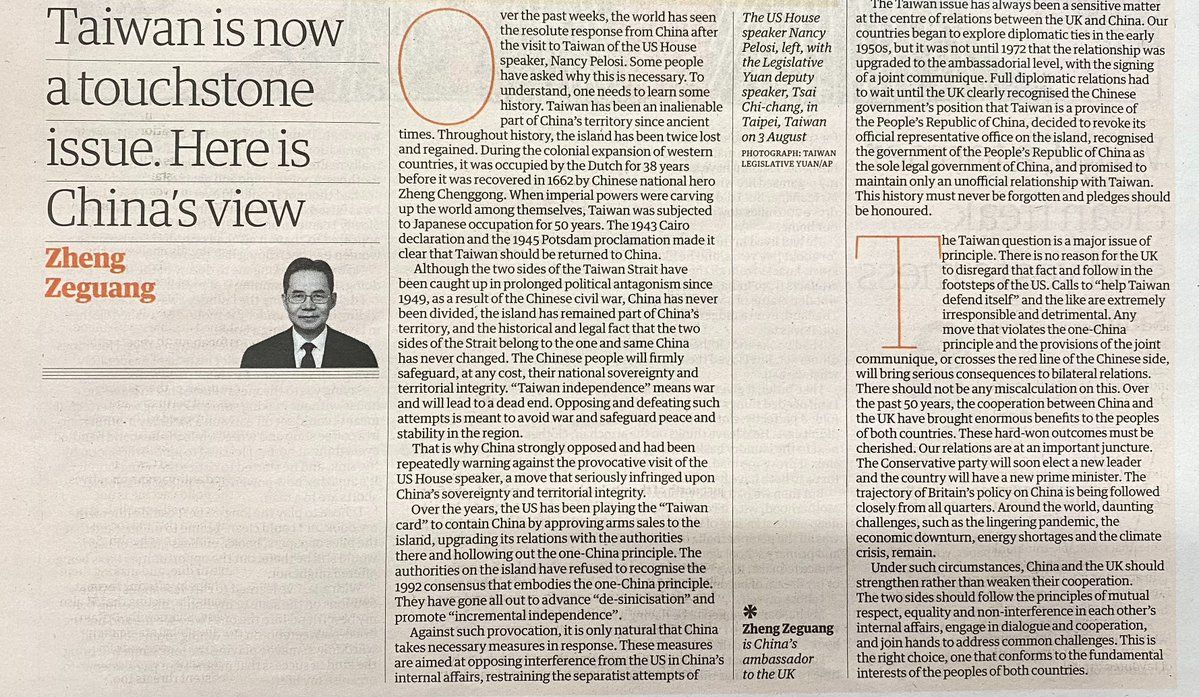 The Chinese envoy to the United Kingdom warned that British and American interference in the Taiwan issue could result in a war, claiming that Beijing’s ties with the UK are now at a crossroads over the island.
Taking to the pages of the Guardian in an op-ed on Tuesday, Chinese ambassador to the UK Zheng Zeguang offered his government’s stance on the territorial spat while declaring that Taiwan had become a “touchstone issue” for China, the US and the UK alike.

“Over the years, the US has been playing the ‘Taiwan card’ to contain China by approving arms sales to the island, upgrading its relations with the authorities there and hollowing out the one-China principle,” the envoy wrote, referring to a policy that discourages foreign states from forming diplomatic relations with Taipei, which has long been self-governed.

Zheng also urged Britain to avoid following in the “footsteps of the US,” citing recent visits by senior American lawmakers to Taiwan, and noted that the island “has always been a sensitive matter at the center of relations between the UK and China.”

The ambassador’s comments come amid a new round of Chinese military drills in the air and waters around Taiwan, mirroring another bout of exercises held immediately after a visit to Taiwan by US House speaker Nancy Pelosi.

Zheng likewise accused China’s rivals of disturbing regional peace by attempting to intervene on the Taiwan issue, warning of “serious consequences” if London “crosses the red line of the Chinese side.”

While China considers the island a part of its territory, Taiwan has been governed effectively autonomously since the Chinese Civil War in 1949, when the nationalist Kuomintang faction was defeated by communist forces on the mainland and was forced to flee. The local administration has continued to refer to the island as the “Republic of China” ever since, though it has been formally recognized by only a handful of foreign countries.
Add Comment