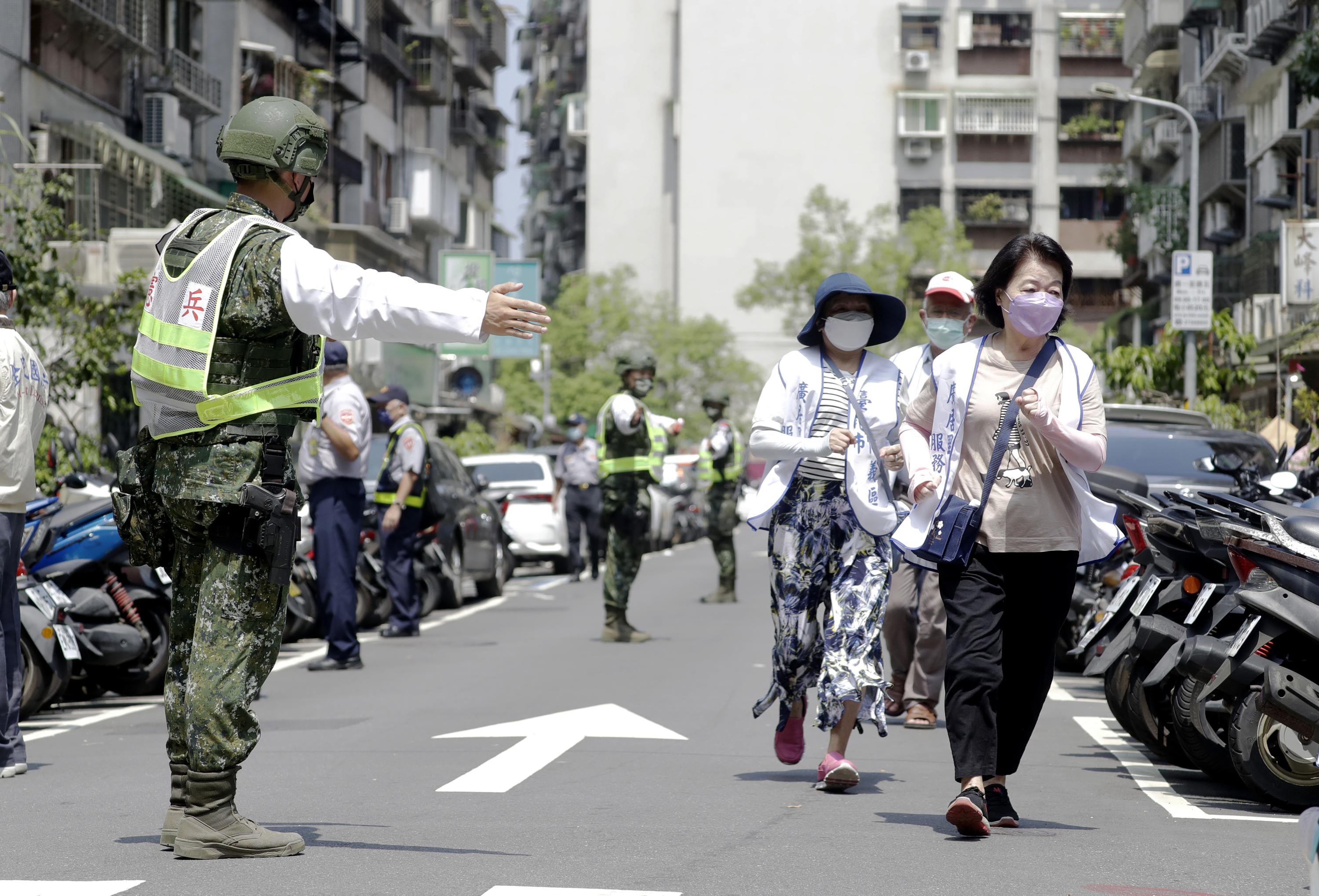 Taiwan’s capital staged air raid drills Monday and its military mobilized for routine defense exercises, coinciding with concerns over a forceful Chinese response to a possible visit to the island by U.S. Speaker of the House Nancy Pelosi.
While there was no direct link between China’s renewed threats and Taiwan’s defensive moves, they underscore the possibility of a renewed crisis in the Taiwan Strait, considered a potential hotspot for conflict that could envelop the entire region.

Air raid sirens were sounded in the capital Taipei and the military was holding its annual multi-day Han Kuang drills, including joint air and sea exercises and the mobilization of tanks and troops.

In Taipei, police directed people to shelters when a siren went off shortly after lunchtime. Streets emptied and shops closed.

“In recent years, Chinese military planes have frequently harassed Taiwan, and the war between Russia and Ukraine broke out in February this year,” Taipei Mayor Ko Wen-je told reporters, referencing concerns that a similar conflict could break out in East Asia. “All these things make us understand the importance of being vigilant in times of peace and we need to be prepared if there is war.”

Pelosi has not confirmed when, or even if, she will visit, but President Joe Biden last week told reporters that U.S. military officials believed such a trip was “not a good idea.” Administration officials are believed to be critical of a possible trip, both for the problematic timing and the lack of coordination with the White House.

China’s authoritarian ruling Communist Party considers democratic, self-ruling Taiwan its own territory, to be annexed by force if necessary, and regularly advertises that threat by staging military exercises and flying warplanes into Taiwan’s air defense identification zone or across the center line of the 180-kilometer (100-mile) -wide Taiwan Strait.

Beijing says those actions are aimed at deterring advocates of the island’s formal independence and foreign allies — principally the U.S. — from interfering, more than 70 years after the sides split amid civil war. Surveys routinely show that Taiwan’s 23 million people reject China’s assertions that the island is a Chinese province that has strayed and must be brought under Beijing’s control.

Pelosi, long a sharp critic of Beijing, is second in line to the White House. She is viewed as a Biden proxy by China, which demands members of Congress follow the commitments made by previous administrations.

Taiwan is among the few issues that enjoys broad bipartisan support among lawmakers and within the administration, with Biden stating earlier this year that the U.S. would defend Taiwan if it came under attack.

U.S. law requires Washington provide Taiwan with the means to defend itself and treat all threats to the island as matters of “grave concern,” but remains ambiguous on whether it would commit forces in response to an attack from China.

Though the sides lack formal diplomatic ties, the U.S. is Taiwan’s chief provider of outside defense assistance and political support, in a reflection of its desire to limit China’s growing influence and maintain a robust American presence in the Western Pacific.

During a visit to Indonesia on Sunday, U.S. Gen. Mark Milley, chairman of the Joint Chiefs of Staff, said the Chinese military has become significantly more aggressive and dangerous over the past five years.

Milley’s Chinese counterpart, Gen. Li Zuocheng, told him in a call earlier this month that Beijing had “no room for compromise” on issues such as Taiwan.

On Monday, Chinese Foreign Ministry spokesperson Zhao Lijian said Beijing had repeatedly expressed its “solemn position” over a potential visit by Pelosi, who would be the highest-ranking U.S. elected official to visit Taiwan since 1997.

“We are fully prepared,” Zhao told reporters at a daily briefing. “If the U.S. is bent on going its own way, China will take firm and strong measures to defend national sovereignty and territorial integrity.”

China has not said what specific actions it would take, although speculation has centered on a new round of threatening military exercises or even an attempt to prevent Pelosi’s plane from landing by declaring a no-fly zone over Taiwan.

“If the U.S. is determined to make (a visit) happen, they know China will take unprecedented tough measures and the U.S. must make military preparations,” said Shi Yinhong, an international relations expert at Beijing’s Renmin University.

The timing of a Pelosi visit, which could happen sometime in early August, is especially sensitive, hinging on multiple factors. Among them is the anniversary of the founding of the People’s Liberation Army — the military branch of the ruling Communist Party — which falls on Aug. 1, a date used to stoke nationalism and rally the troops.

Chinese leaders are also under pressure from hardline nationalist forces within the party ranks.

That harkens back to the Taiwan Strait crisis of 1995 and 1996, when China held exercises and launched missiles into waters north and south of the island in response to a U.S. visit by the island’s then-president Lee Teng-hui. The U.S. responded by dispatching two aircraft carrier battle groups to the area, a move that helped spur China’s massive military upgrading in the years since that has radically changed the balance of power in Asia.

Xi is meanwhile seeking a third five-year term as party leader at a congress later this year and needs to show he is in charge amid a slowing economy and a public backlash against his “zero-COVID” policy.

Overall, the situation appears to be more serious than in 1995-96, said Bonnie Glaser, director of the Asia Program at the German Marshall Fund of the United States.

“If the Chinese want to demonstrate resolve they have many ways to do so,” Glaser said.

China doesn’t want to create a “crisis for crisis’ sake,” but could try to use the possibility of a Pelosi visit to advance its agenda, said Oriana Skylar Mastro, an expert on Chinese military affairs and foreign policy at Stanford University.

China might take the opportunity to test out capabilities through a large-scale amphibious exercise, which it would justify as a response to an “aggressive move” by the U.S., Mastro said.

“So I think they’ll use it as an opportunity to make advances that could be problematic, but (which) they wanted to do anyway regardless of the Pelosi visit,” she said.
#Joe Biden  #Covid
Add Comment