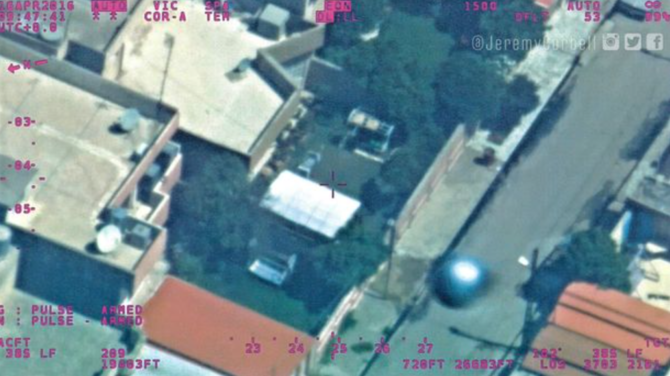 The US military is investigating an “unidentified flying orb” after a large, round metallic object was spotted by a spy plane over an active conflict zone, it was reported on Tuesday.
The image, originally taken in April 2016 over the city of Mosul, was part of a classified briefing for US officials and was shared by Jeremy Corbell and George Knapp on their podcast “Weaponized,” a Daily Mail report said.

Produced from a video by the Pentagon’s Unidentified Aerial Phenomena Task Force, the image of the orb is the first to be publicly revealed from the US government’s ongoing unidentified flying objects investigation showing an unidentified craft over a conflict zone.

“It’s one of many images. This one is a still from a video. It’s a brief video, maybe four seconds, where this orb or metallic ball runs alongside a spy plane, and it’s shown moving beside the plane without dropping altitude at all.

“This is within part of the conversation of our intelligence community. This is what they’re looking at,” he added.

One intelligence source speaking to the Mail said the video was analyzed by experts for more than six years at the Joint Base Langley-Eustis in Virginia for the US Central Command but remains unexplained.

Following approval by US President Joe Biden of the Fiscal 2023 National Defense Authorization Act, which contains provisions relating to UFOs, the case was made public.
#Joe Biden
Add Comment