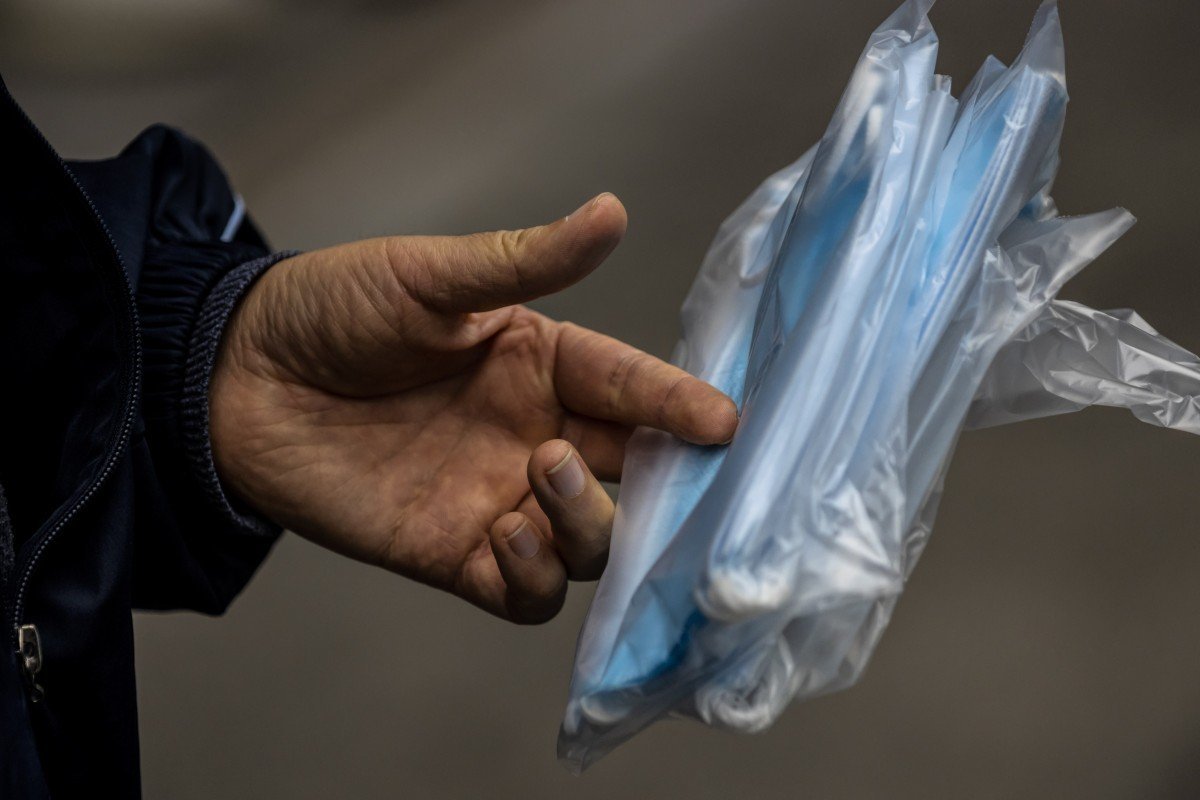 Surgical masks protect more from germs on fingers than viruses in the air, experts say after panic buying

Learning more about the deadly outbreak informs who should wear which type of mask, and how. Demand for masks is up to 100 times higher than usual, with prices up to 20 times higher and backlogs of four to six months, WHO director general says

The panic buying of surgical face masks cleaned out store shelves across Asia in people’s scramble to protect themselves against the coronavirus outbreak. Most doctors agree that the masks offer protection, but mainly from a wearer’s own hands rather than from airborne pathogens.

The primary purpose of surgical face masks is to prevent surgeons infecting patients during surgery, not to protect the wearer, William Schaffner, an infectious disease specialist at Vanderbilt University in Tennessee, said.

“The surgical mask is designed to prevent what is in the surgeon’s nose and mouth from getting into the surgical wound,” he said.

Although medical specialists do not entirely agree on the effectiveness of masks against airborne germs, they do find consensus on the danger from hands and fingers, in spreading disease by touching potentially infected surfaces such as door handles. That information seems to be of greater benefit to the general public and is the reason all health authorities stress the importance of washing hands.

“One of the things [the mask] prevents you from doing is putting your hands, your fingers, on your nose and mouth, and that may help reduce transmission,” Schaffner said.

Why is there a shortage?

Demand for surgical masks has skyrocketed in the two months since the disease now known as Covid-19 started to spread from the city of Wuhan in central China, depleting world stockpiles and causing concern at the World Health Organisation (WHO).
The virus has killed more than 1,600 people and infected in excess of 60,000 worldwide, including in Japan, Australia, Russia, Germany and the United States.

The virus has killed more than 1,600 people and infected in excess of 60,000 worldwide, including in Japan, Australia, Russia, Germany and the United States.

“The world is facing severe disruption in the market for personal protective equipment,” WHO director general Tedros Adhanom Ghebreyesus said at a media briefing on February 7. “Demand is up to 100 times higher than normal and prices are up to 20 times higher.

“The situation has been exacerbated by widespread, inappropriate use of [personal protective equipment] outside patient care. As a result, there are now depleted stockpiles and backlogs of four to six months. Global stocks of masks and respirators are now insufficient.”

China is the world’s biggest manufacturer of face masks, making about half of the global output with about 20 million a day or more than 7 billion a year.

But there is still a shortage, while the number of infections rises and spreads in Asia and beyond. To make up for the shortfall, China has turned to countries including Japan and the US to import urgently needed protective gear.

Officials in China have urged citizens to wear masks in public to try to reduce the spread of infections, while the outbreak has also spurred panic buying from Hong Kong to Japan as people queue for hours to buy masks and hand sanitisers.

Marybeth Sexton, assistant professor in the infectious diseases division at Emory University School of Medicine in Atlanta, said there was a lack of good data about the effectiveness of surgical masks used by the public.

“It is possible that they have some benefit, but other interventions, including hand washing and avoiding going out in public while sick, are likely to be more useful in preventing infection,” she said.

It cannot be said that the masks are of no benefit, because they do provide some shielding of what a wearer breathes in. “It’s just that the mask is not designed to keep out those tiny particles in which the virus is transmitted from person to person,” Schaffner said.

Revisiting the choice of mask

Michael Osterholm, director of the University of Minnesota’s infectious disease research centre, said so-called aerosol transmission had implications for what kind of respiratory protection people should use.

Human-to-human transmission of a disease includes physical contact and an area of about two metres (6½ feet) around an infected individual, which is the approximate distance that water droplets breathed, coughed or sneezed into the air can travel before falling to the ground.

Aerosol transmission refers to minute particles that travel longer distances and typically require protection using an N95 respirator mask, which filters out 95 per cent of airborne particles, according to the US Centres for Disease Control and Prevention.

“That’s why N95 has become so important, because they are the only things that will handle aerosols,” Osterholm said. “If this was just droplets, surgical masks might play a bigger role, but with aerosols that’s just not true, and even the six-foot distance is questionable.

“The thing that concerns me is that we see so many Chinese citizens wearing surgical masks thinking that they are protected, but this virus may very well [have] aerosol transmission – so the surgical mask will offer very little protection at best.”

China’s National Health Commission said on Thursday that most transmission occurred through droplets and contact, and more observation was needed before concluding there were other channels for human-to-human transmission.

Are masks being misused?

N95 respirators are sold to the public, but are painful to wear for prolonged periods and must be put on correctly to work.

“There are different kinds of N95 masks, but those that are most effective require fit-testing and training to ensure they are worn correctly,” Sexton said. “They don’t provide the intended tight seal to the face if the size or fit of the mask is wrong, or if a person has any underlying facial deformity or facial hair.”

These specialised face masks are also made of thicker material compared with surgical masks, which makes it more difficult to breathe while wearing one.

“If you have it on correctly, the work of breathing is much harder, because you’re breathing only through that thick filter,” Schaffner said. “It’s also a bit claustrophobic and can get warm and humid inside the respirator after a period of time.”

The idea of training everybody in the world how to wear those, and have them worn for hours at a time, is not realistic, he said.
Raina MacIntyre, professor of global biosecurity at the University of New South Wales in Sydney, said the N95 respirators should be “reserved” for health care workers, because they are the ones who really need them.

“We already have a shortage, and it is essential our health workers are protected,” she said.

“Hand washing is also highly effective and should be used routinely during epidemics. Washing with water and soap is as effective as hand sanitiser.”
Add Comment