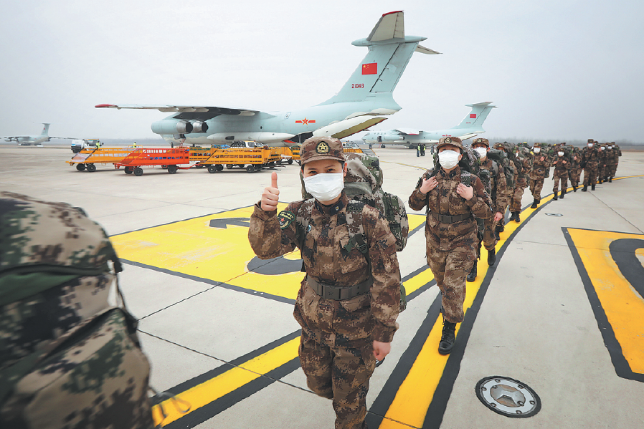 A 1,000-bed hospital in Wuhan, Hubei province, will begin receiving highly contagious pneumonia patients on Monday, less than 10 days after construction began.
The new facility will ease the shortage of beds in the city resulting from an increasing number of patients infected with the novel coronavirus.

Medical personnel from the People's Liberation Army will take over the new Huoshenshan Hospital, with a total of 1,400 expected to start receiving and treating patients on Monday.

A second special hospital for the treatment of the novel coronavirus -Leishenshan Hospital -is under construction in Wuhan. It is expected to be completed on Wednesday and start receiving patients the following day.

The military assistance was approved by President Xi Jinping, who is also general secretary of the Communist Party of China Central Committee and chairman of the Central Military Commission.

Huoshenshan Hospital, with a floor area of 25,000 square meters, will deal primarily with patients who have confirmed coronavirus infection. It is a copy of Beijing Xiaotangshan Hospital, which was built in seven days in a Beijing suburb in April 2003 during the outbreak of severe acute respiratory syndrome. Its purpose was exclusively to treat SARS patients, and it played a key role in prevention and control of the deadly disease.

Construction of Huoshenshan Hospital, in suburban Wuhan, formally started on Jan 25 to cope with the rapidly increasing number of people infected with the coronavirus. At the peak of the massive construction project, more than 4,000 workers and about 1,000 construction machines and trucks were on the site.

Fifteen experts from the PLA Center for Disease Control and Prevention and the PLA Academy of Military Science's Military Medical Institute will join them to offer professional consultation.

Many personnel involved in this operation, the largest mobilization of the PLA's medical forces since the devastating earthquake in Sichuan province in May 2008, are experienced in handling infectious diseases because they took part in fights against the 2003 SARS outbreak in China and the Ebola epidemic in western Africa in 2014.

Since the outbreak of the novel coronavirus in Wuhan in December, infections have leaped across China. New cases have also been reported in other countries.

In Wuhan, the number of confirmed cases reached 4,109 on Saturday, accounting for nearly 30 percent of all cases on the Chinese mainland.

Bai Xuejian, a publicity officer from China Construction Third Engineering Bureau Co, a leading builder of the hospital, said the company was given the task by the authorities in Wuhan on Jan 23, with construction formally beginning two days later.

To ensure timely completion, construction work was done in shifts 24 hours a day. Strict disease control and prevention measures -such as requiring workers to wear masks and sterilization of the whole construction site -were enforced, he said.

Xu Ming, a project manager at Wuhan Construction Group, said he has been on duty every day since the project began.

"The workers are organized in two or three shifts for 24 hours a day. And for me, I have to keep supervising and coordinating to ensure the work is done according to requirements," he said, speaking through his mask on Sunday at the construction site. "Everything has been in a rush, keeping everyone so busy that getting no sleep at night is normal."

The construction process of both new hospitals has been live¬streamed online every day since the start of the projects. The live¬streaming videos provide a bird's-eye view of the construction sites, with workers, excavating machines and trucks racing to make the deadline.

Although construction of Huo¬shenshan Hospital was expected to be finished on Sunday, Xu and his colleagues may continue working for the hospital for maintenance, he said.

"We have to take care of the workers and ensure they are not infected with the virus, such as giving them masks for free and taking their body temperatures every day," he said.

Also on Sunday, the PLA Air Force used eight of its large transport planes to ferry medical personnel and supplies from the military to Wuhan to aid with disease prevention and control.

The eight aircraft, from an aviation division of the Air Force branch of the PLA Central Theater Command, landed at Wuhan Tianhe International Airport in Hubei province with 795 medical personnel from the armed forces and 58 metric tons of equipment and materials. They came from Shenyang, Lanzhou, Guangzhou and Nanjing.

It was the largest nonmilitary operation of the Air Force's transport fleet since April 2010, when many planes were deployed for earthquake aid in Qinghai province, according to the Air Force.

"It showed that the crews are well trained and prepared to respond to emergencies and difficult missions like this," he said.
Add Comment