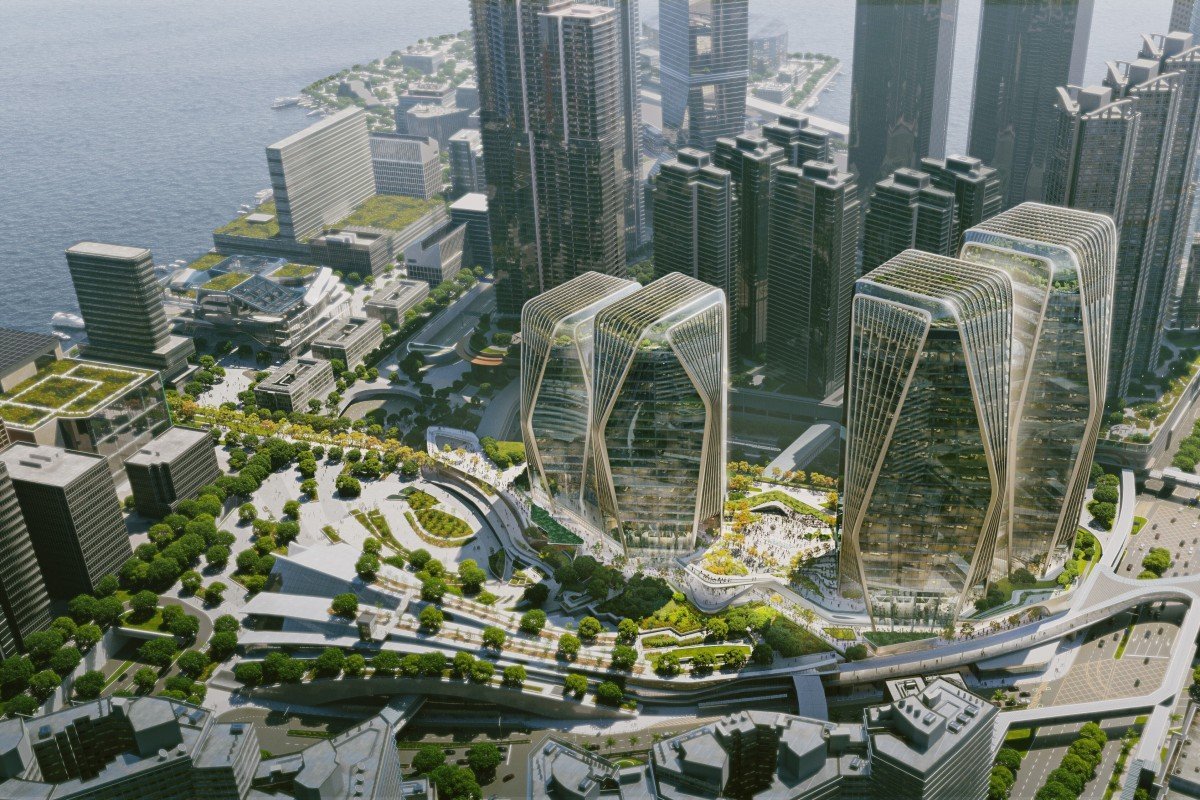 Sun Hung Kai Properties, which paid HK$42.2 billion (US$5.45 billion) for the huge plot of land at the High Speed Rail terminus in West Kowloon, has made several changes to its original plan approved by the Town Planning Board.

According to the developer’s new plan submitted to the board recently, the number of commercial towers will be reduced from three to two, and the amount of open space and green cover will be increased considerably.

“The Approved Scheme with three towers is quite dense and provides limited open space,” Hong Kong’s biggest developer by market capitalisation said in the document released on Friday. “The design does not meet current requirements for Grade A office development.”

Expected to be completed in phases by 2028, the new project design includes a 1.5km walkway that connects the entire West Kowloon neighbourhood and calls for plenty of greenery between the buildings. It will also have 38,000 sq ft of open space for the central plaza, four times that of Times Square. 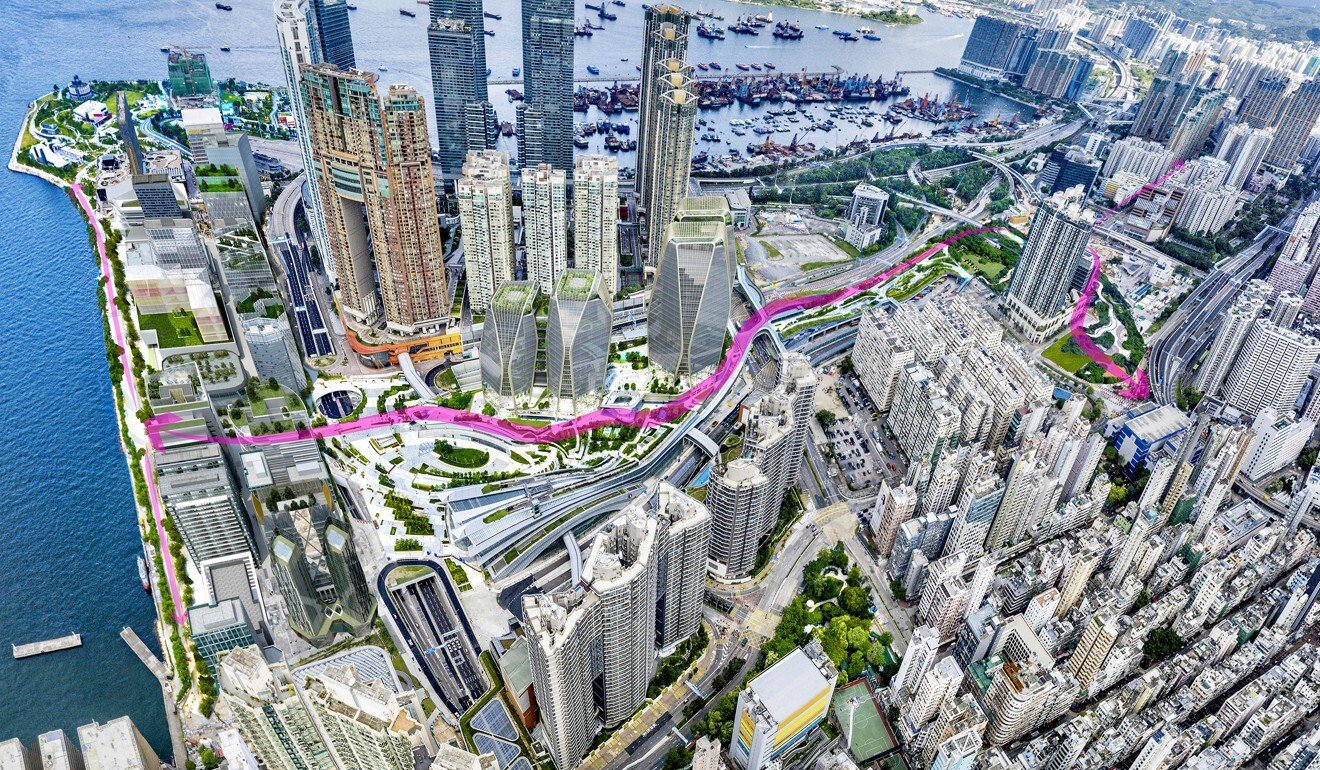 Sun Hung Kai Properties has submitted a new design for its West Kowloon project that calls for plenty of green cover.

“The design was made these several months in times of pandemic, which changed a lot of our thinking,” Timothy Mak Mang-tim, SHKP’s project director, said during a briefing. “For instance, we thought office [goers] have to have more opportunities to get in contact with nature and outdoor space. So we designed a lot of greenery including across the buildings.”

Rebecca Wong, planning director at the developer, said that the outer appearance of the knife-shaped buildings in the earlier design has changed to a more rounded one for a better aesthetic appeal.

At a plot ratio of just 4.05 times, one of the two buildings will be 30 storeys high, while the other will be between 20 and 25 storeys. Their combined gross floor area will total 2.56 million sq ft, 10 per cent less than the earlier plan. Retail space meanwhile has been doubled to 602,779 sq ft.

Mak said the 300,000 sq ft mall in the original design, the size of a neighbourhood shopping centre like Popcorn in Tseung Kwan O, was not enough to cater to the needs of nearby residents and office workers. The parkway is likely to bring in 200,000 people a day, according to SHKP’s projections.

Asked whether the economic downturn and the coronavirus pandemic will affect the progress of the project, Mak said it was unlikely as it was a long-term project.

“Economic cycle always changes,” Mak said. “I still remember when we worked on the International Financial Centre in 1997 [during the] financial tsunami and International Commerce Centre during Sars in 2003, when very few [developers] placed bids. Now looking at the result, it turns out [they are] the lucky ones to have survived the downturn.” 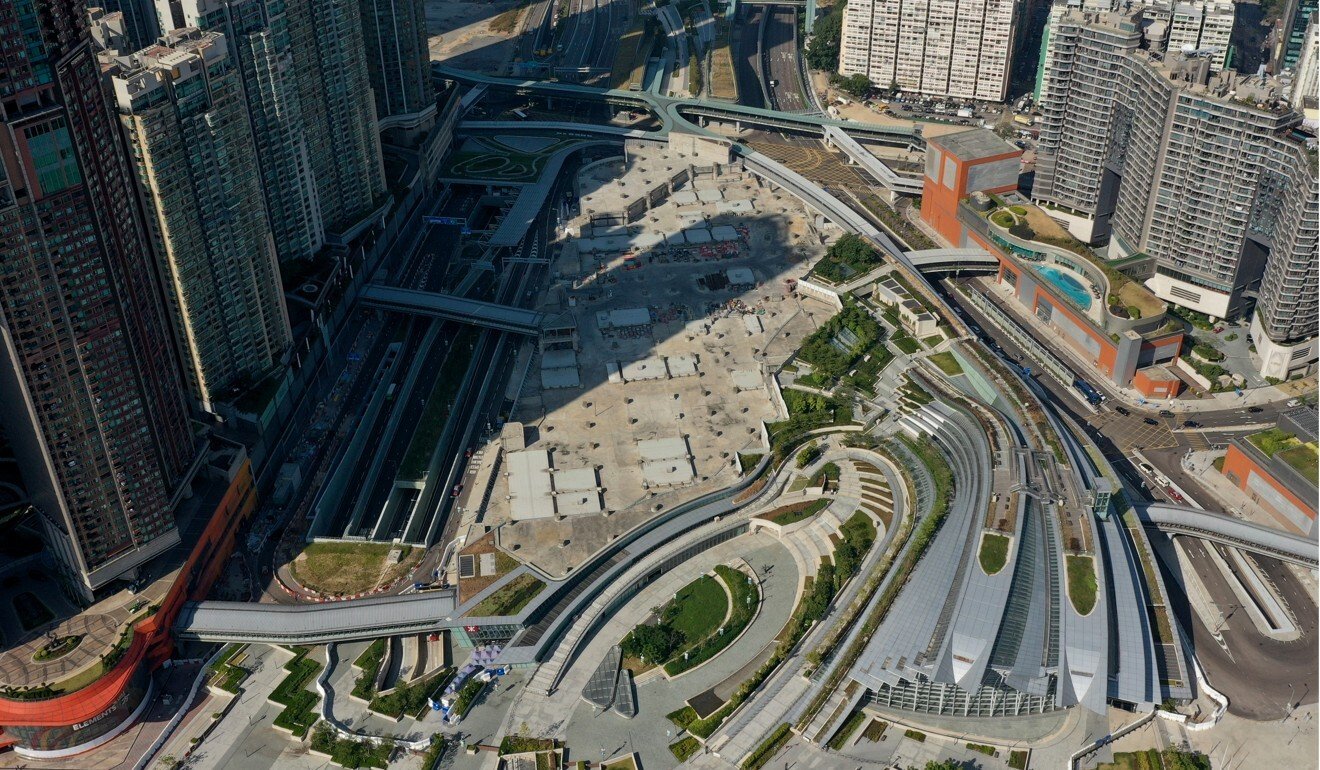 The plot of land atop the West Kowloon high-speed railway station is equivalent to 47 Olympic-sized swimming pools.

Alex Leung, senior director at CHFT Advisory and Appraisal, said that as the project will have one less office building, the occupants of the other two towers will have better views as they will be spaced further apart.

He also added that SHKP may have been influenced to increase the space allocated to retail as it has better potential because of the high-speed railway and captive residents nearby.

Last November, SHKP won the parcel with a record HK$42.2 billion bid, or HK$13,345 per sq ft. It was the largest commercial land parcel in Hong Kong, equivalent to 47 Olympic-sized swimming pools.

The whole plot can be built into 3.17 million sq ft of gross floor area for retail, office or hotel use, or about 12 per cent more than the space in nearby ICC, Hong Kong’s tallest skyscraper.