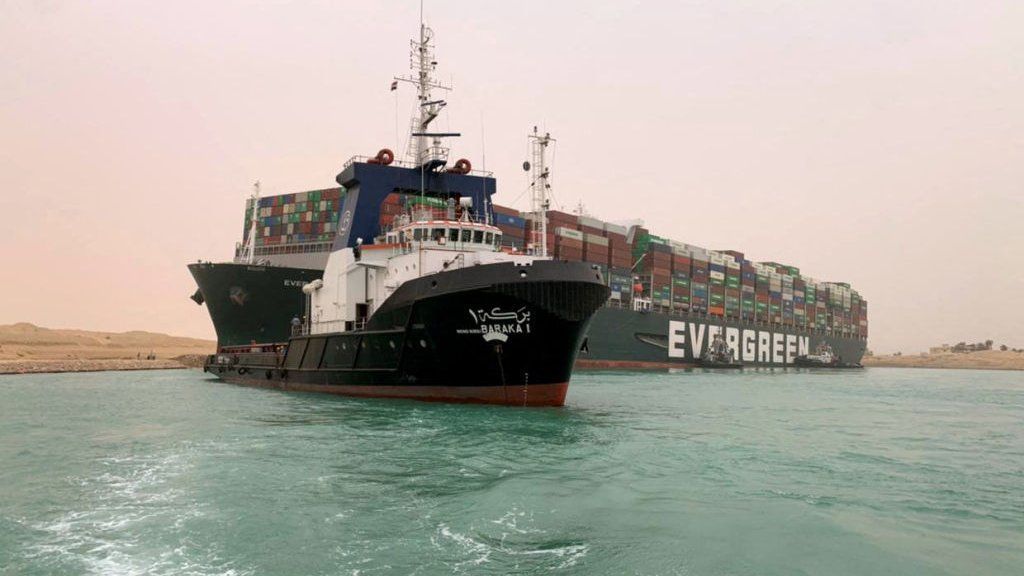 Suez blockage is holding up $9.6bn of goods a day

The stranded Ever Given mega-container ship in the Suez Canal is holding up an estimated $9.6bn (£7bn) of goods each day, according to shipping data.

This works out at $400m an hour in trade along the waterway which is a vital passageway between east and west.

Data from shipping expert Lloyd's List values the canal's westbound traffic at roughly $5.1bn a day, and eastbound daily traffic at around $4.5bn.

Despite efforts to free the ship, it could take weeks to remove experts say.

The Ever Given, operated by the Taiwanese company Evergreen Marine, is the length of four football pitches and one of the world's biggest container vessels. The 200,000-tonne ship is capable of carrying 20,000 containers.

Its blockage is causing huge tailbacks of other ships trying to pass through the Suez Canal. 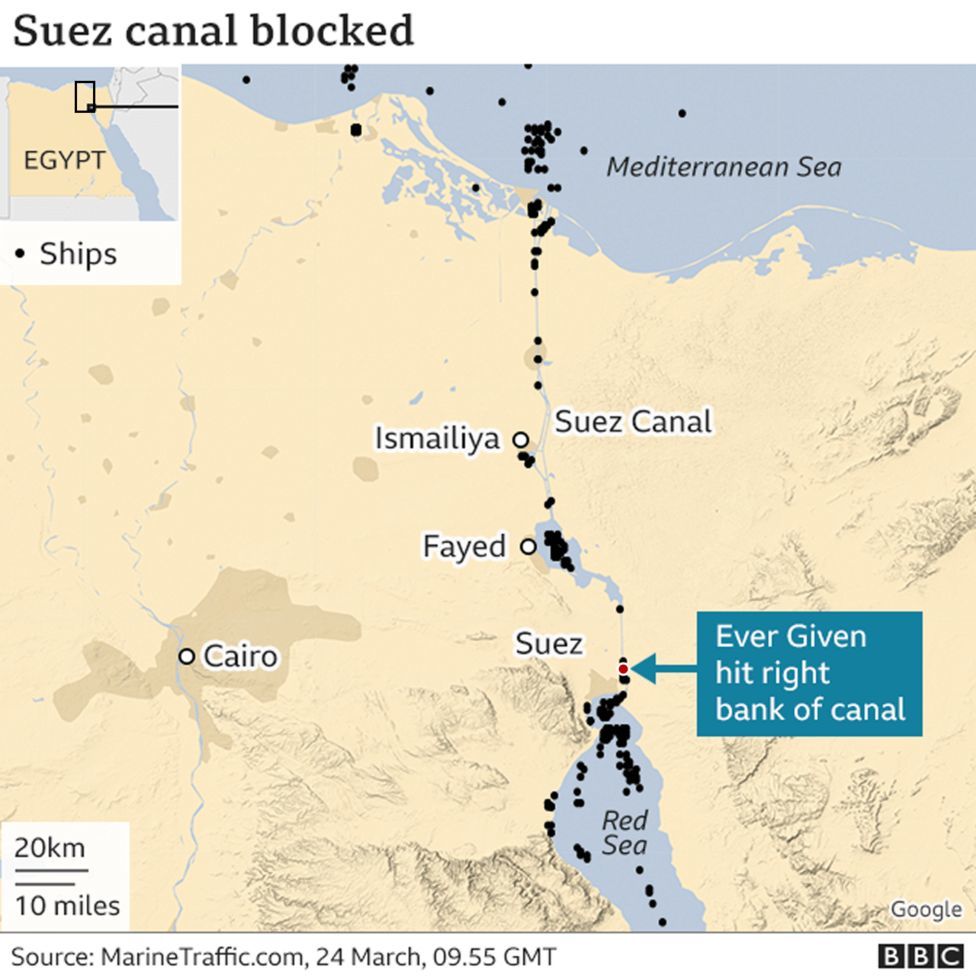 The canal, which separates Africa from the Middle East and Asia, is one of the busiest trade routes in the world, with about 12% of total global trade moving through it.

According to Lloyd's List tracking data there are more than 160 vessels waiting at either end of the canal. These include 41 bulk carriers and 24 crude tankers.

Along with oil, the sea traffic is largely consumer products such as clothing, furniture, manufacturing components and car parts. 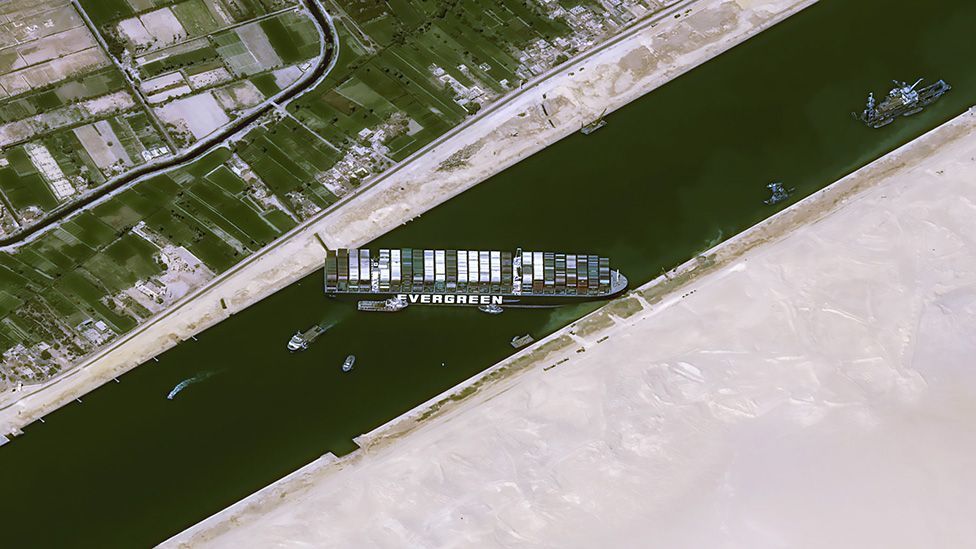 "We're hearing reports now that shipping companies are starting to divert their ships around the southern tip of Africa, the Cape of Good Hope, which adds about 3,500 miles to the journey and up to 12 days," Guy Platten, the secretary general of the International Chamber of Shipping, told the BBC's Today programme.

He said the ship appeared to be "hard fast aground", adding that freeing the vessel from the bank was taking much longer and was more complicated than had been initially expected.

Mr Platten added there would be "some major real-world effects on the supply chain", explaining that consumers would would ultimately bear the cost.

The Ever Given had been scheduled to arrive in the port of Felixstowe in early April.

Container ships have nearly doubled in size in the past decade as global trade expands, making the job of moving them much harder when they get stuck.

"What are we thinking? Have vessels gotten too large? Containers being jettisoned overboard, delayed transits due to terminal congestion and let us not forget the long line of vessels at many ports waiting for a berth," said Jon Monroe, who runs his own ocean transportation consultancy. 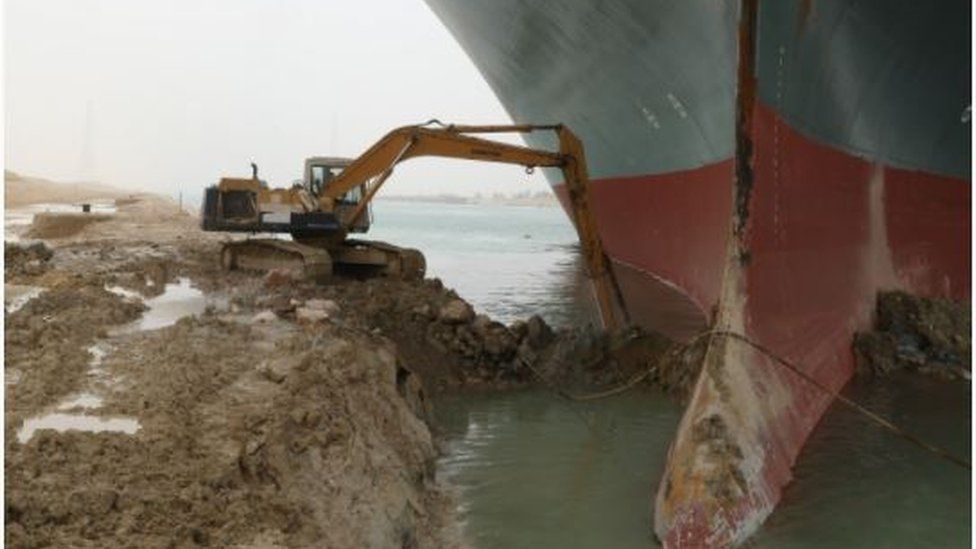 BIMCO, an international shipping association, says the delays will only continue to grow and affect supplies.

"For each day of delay my thought is it will take two days to undo the delays," said Alan Baer, president of logistics provider OL USA.

"Right now three days creates six days of ongoing delays. I'm not sure this is a perfect formula, but it will be close," he told the BBC.

In addition to delaying thousands of containers loaded with consumer items, the stranded ship has also tied up empty containers which are needed for exports. 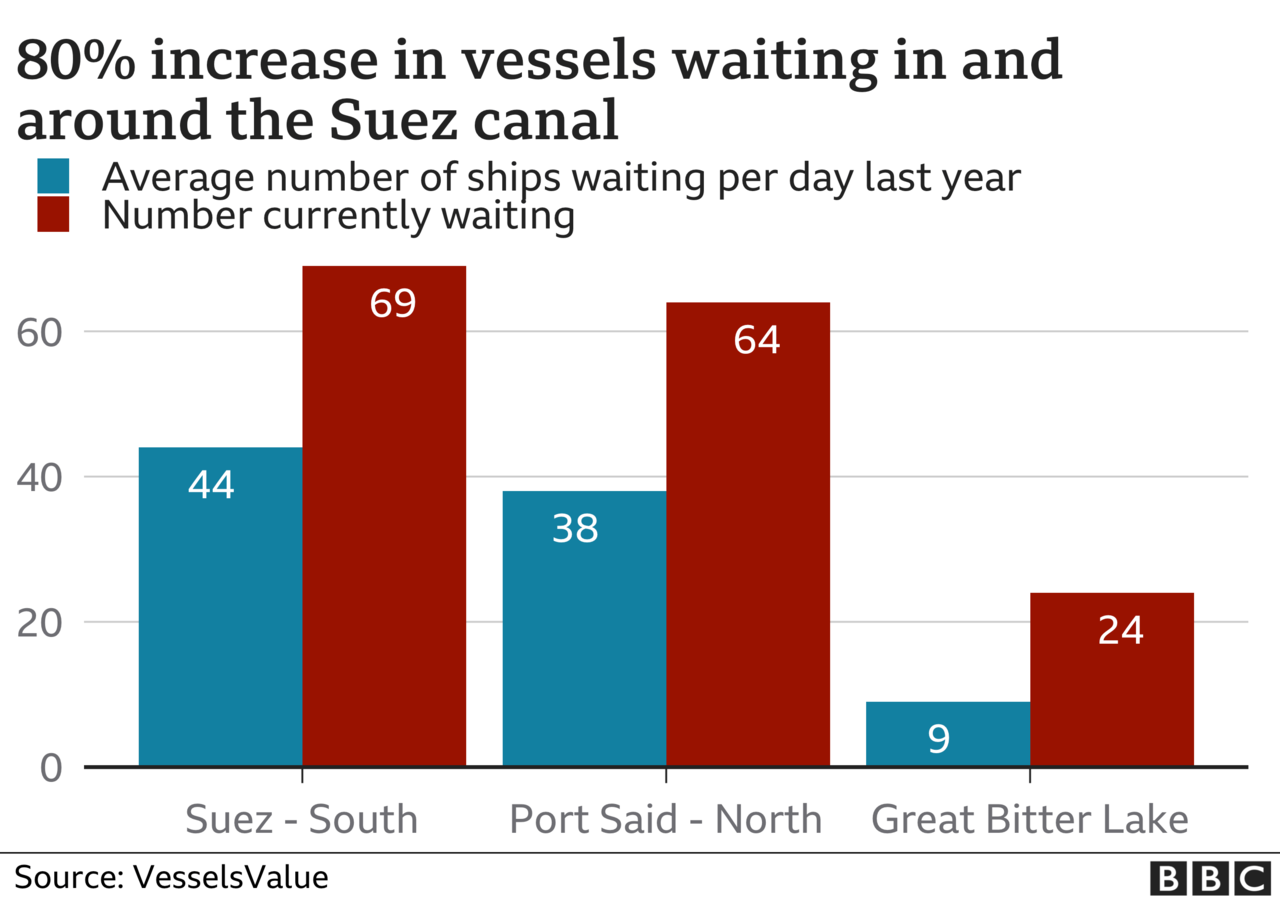 If the delays are short, most companies will absorb the extra delay in transit times. But salvage officials said the congestion could last days or even weeks, in a blow to global supply chains already strained by the Covid-19 pandemic.

Some companies will be considering flying replacement merchandise for higher value products, or transporting them via trains.

Two major shipping companies, Maersk and Hapag-Lloyd, said they are looking into options to avoid the Suez Canal.

Egypt's Suez Canal Authority (SCA) said it was doing all it could to refloat the ship with tug boats, dredgers and heavy earth-moving equipment.

Kitack Lim, secretary general of the International Maritime Organisation, said: " I am aware of the implications of the temporary closure of the canal, and I ask for patience from stakeholders across the supply chain as everyone works to ensure that the ship, its crew, its cargo and the environment remain protected."