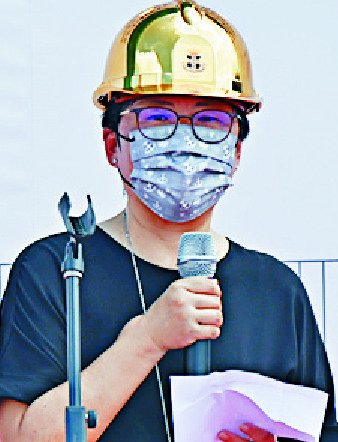 Coeducational secondary school St Stephen's College has seen 50 transfer students in the new school year, as about 10 percent of its 920 students have emigrated.
The school held a topping-out ceremony for its new academic building yesterday and the building is expected to be operational next September.

After the ceremony, principal Carol Yang Ching said that around 10 percent of the school's students have left because of emigration.

But the number of new secondary one students being admitted to the school this academic year was not affected by the emigration wave, she added.

The complex, with a gross floor area of 5,520 square meters, will house a 1,000-seat seaview grand hall, a black box theater, an indoor fitness center, a student activity center and classrooms.

Yang said the new facilities could help enhance their students' development across multiple subjects such as music, art, drama and sports.

The cost of the building project reached HK$340 million, and half of the money needed was donated by alumni and parents, Yang said.

She expects construction work of the building, which began in 2019, to finish in May and the new facilities could start operation in September.

But it is unknown whether the school will increase its tuition fees after the building has been completed as it will depend on the building's maintenance and cleaning fees Yang said.
Add Comment