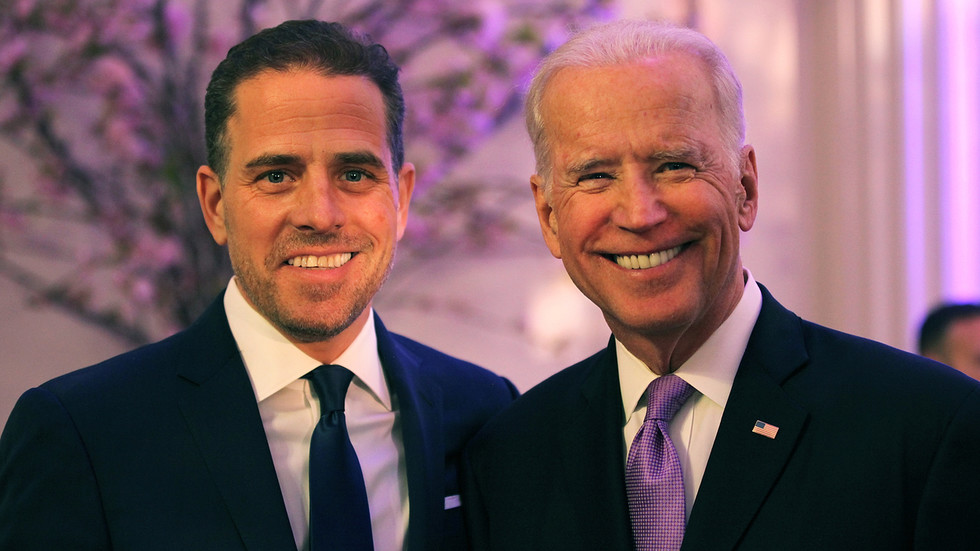 Stop the coverup, get the truth out there and let the chips fall where they may, journalist behind Hunter Biden biopic says

‘My Son Hunter’, a controversial movie about the president’s son, is slated to be released online later this year after being overwhelmed by a flood of financial support to reveal the truth about Joe Biden’s problem child.

Hollywood, big tech, and the mainstream media are complicit in a coverup, according to investigative journalist and filmmaker Phelim McAleer. The Irishman has revealed his next project will be a movie about Hunter Biden in which he aims to reveal the truth about the president’s wayward second son.

McAleer believes if the allegations surrounding Hunter Biden had been properly scrutinized, then Donald Trump may still be in the White House. Those involved claim that Joe Biden indulged in corruption to help his son professionally, centering around suspicious emails discovered on Hunter’s laptop. That led to accusations of money laundering and illegal dealings with Chinese intelligence.

Speaking to RT.com, he said: “There’s a lot of hunger out there for this story. This a fantastic cinematic story that Hollywood should have been fighting to get made, but they haven’t. This is a story that really could have swung the last election and could made a big difference in politics but was suppressed by big tech, big media and now big Hollywood.”

Illustrating the appetite for My Son Hunter, within the first 48 hours of launching a crowdfunding appeal, donations reached $300,000. His aim is to get $2.1 million and shoot in Serbia this summer. It will then be released online for free towards the end of 2021.


McAleer said: “This is an international story, Joe Biden is the most powerful person in the world and we need to know who’s paying his son. There’s an email where Hunter says, ‘I have to give 10 percent to the big guy.’ Maybe that is, to quote a phrase, ‘Russian disinformation’, but you should at least ask the people cc’ed in that email chain, what was their response? If you’re so sure this is disinformation or propaganda, surely all these journalists would be rushing to confirm or deny this email. They didn’t, which proves they know it’s true and they don’t like the answers, so that’s why they are not asking the question.”

The biopic will be truthful, but with an entertaining edge. It will explore Hunter’s alleged drug habit, his links to Ukrainian energy company Burisma and his sexual infidelities, including a relationship with his sister-in-law.

McAleer, who works alongside wife Ann McElhinney, explained: “This is a man who’s had a tragic life and addiction issues. As Irish people, we’re not making a movie that’s going to attack people with addictions, as we practically exported alcoholism around the world. It’s a story about a man who got a waiver to get into the navy late in life, arrived on the first day and they found he had more cocaine in his system than the population of Colombia. He then claimed the reason he had cocaine in his system was because two South Africans had given him cocaine laced cigarettes. That just doesn’t ring true.

“Then you have a company like Burisma, who did an executive search across the world and found the only person that they wanted for their board was this drug addict, this guy who was having an affair with his brother’s widow whilst he was married. This is a guy who was given money to go on spending sprees by Chinese businessmen. It’s got intrigue, mystery, exotic locations and of course strip bars and beautiful women – what could possibly go wrong?”

He added: “It’s half Austin Powers, half King Lear and half House of Cards, which is a lot of halves. It’s his life, his loves, his dodgy dealings and his family’s dodgy dealings.”

McAleer expects issues with distribution, which is why he plans to release it on YouTube, and if it’s banned, joked he will upload it “to a server in the North Pole.” He encountered similar hurdles with his previous film ‘Gosnell: The Trial of America’s Biggest Serial Killer’, about a rogue abortion doctor. He says that sentiment will be even greater with ‘My Son Hunter’ due to its political element and even more divisive nature.

Illustrating this is the fact that the screenwriter has asked to remain anonymous and the only actor to publicly voice an interest in taking part is outspoken right-leaning actor Laurence Fox, who is also currently running to be mayor of London.

McAleer and his wife have already received death threats since news broke about their project. He explained: “We’ve had a lot of actors say I’d love to play that role, but we’ve had a lot of actors say, ‘I want to work again.’ One actor said to me, ‘I’d love to play the role of Joe Biden, I’d be the most famous actor in the world for a while if I did that, but I need to work again, my family needs to eat.’

“That’s how toxic the atmosphere is, at our home here in California we have a big fence and cameras, we’re careful.

“And that’s another reason to go to Serbia, we can have proper security there.”

It’s been 12 years since McAleer and McElhinney moved to the US and in that time, he’s been dismayed by the media culture and how it’s changed. He said: “It’s very orthodox at this stage, when we first came out it was a lot freer. It’s become a lot more insular and joyless, there’s less fun in it because there’s certain things you can’t say. It all comes down to if the mainstream media did their job, then we wouldn’t be making this film.”