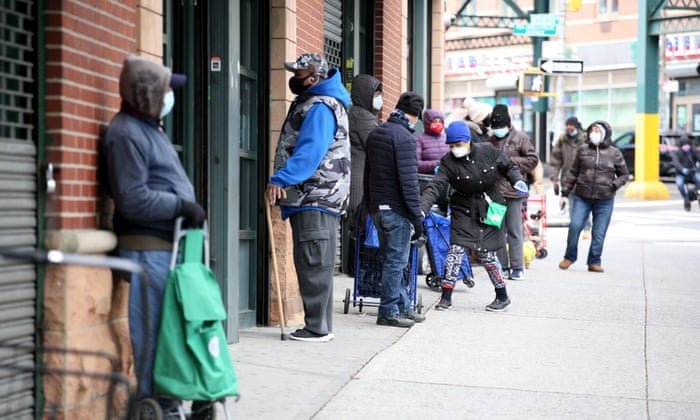 Optimism fizzles out following sombre prognosis and soaring US unemployment figures
European stock markets slumped on Thursday as investors began to lose faith in the prospect of a swift recovery from the economic turmoil triggered by Covid-19.

Optimism fizzled out after a sombre economic prognosis from the chair of the Federal Reserve was swiftly followed by soaring US unemployment figures and a leading health official’s warning that the world may never be rid of the virus.

The triple whammy of bad news sent the FTSE 100 down 2.75% to 5741.54, while European stocks also slid. However the US Dow Jones Index, which had suffered heavy falls the day before, staged a turnaround as investors overlooked the unemployment statistics finishing the day 377.37 points, or 1.62%, higher.

This week’s equity selloff reversed a more positive trend that took hold in early May, on the back of signs that the worst of the crisis was abating.

Joshua Mahony, senior market analyst at trading firm IG, said: “The lack of market direction over the past month has been a reflection of the uncertainty that has dominated for traders, with initial optimism over impending moves to ease lockdown measures gradually souring.

“The ability to ignore the huge deterioration in the economic picture can only last for so long, with the reasoning behind such actions likely to come crashing down in the event that the prospect of a meaningful economic bounce back cannot occur.

“Despite optimistic claims from Donald Trump, recent comments from [the US government’s top public health expert] Dr Fauci, Jerome Powell and the WHO signal a crisis that is unlikely to be resolved swiftly.”

One of the key drivers of the continued selloff was a warning from a World Health Organization official that coronavirus may be a permanent fixture.

“It is important to put this on the table: this virus may become just another endemic virus in our communities, and this virus may never go away,” said WHO emergencies expert Mike Ryan.

The suggestion, which comes amid fresh outbreaks of the virus in China and South Korea, has stoked fears about a second wave that could choke off any embryonic recovery of business and trade.

Both Powell, who is the chairman of the Federal Reserve, and the Bank of England governor, Andrew Bailey, have also snuffed out any suggestion that central banks will cut rates to negative.

The US president, Donald Trump, has previously referred to negative rates as a “gift”, which other countries were using to stimulate their economies.

The lowering of rates typically boosts stock markets because it makes borrowing cheaper, spurring investment and making it easier for indebted businesses to stay afloat.

But despite warning of the worst recession since the second world war, Powell said this week that the world’s top central bank would not yet countenance negative rates. He advocated a fiscal stimulus in the form of government spending instead.

His comments, made on Wednesday, sparked a chain reaction around the world, with declining US stocks triggering market falls in Asia, followed by a slump in the FTSE. Investors rushed instead to buy safe-haven assets such as gold.

A third factor in the equity rout was fresh jobs data on Thursday showing that another 3 million Americans applied for unemployment benefit last week, taking the total number of claimants to more than 36 million in the last two months.

The huge figures underscored the unrelenting severity of the economic impact facing the world’s largest economy and, by extension, its trading partners.
Add Comment