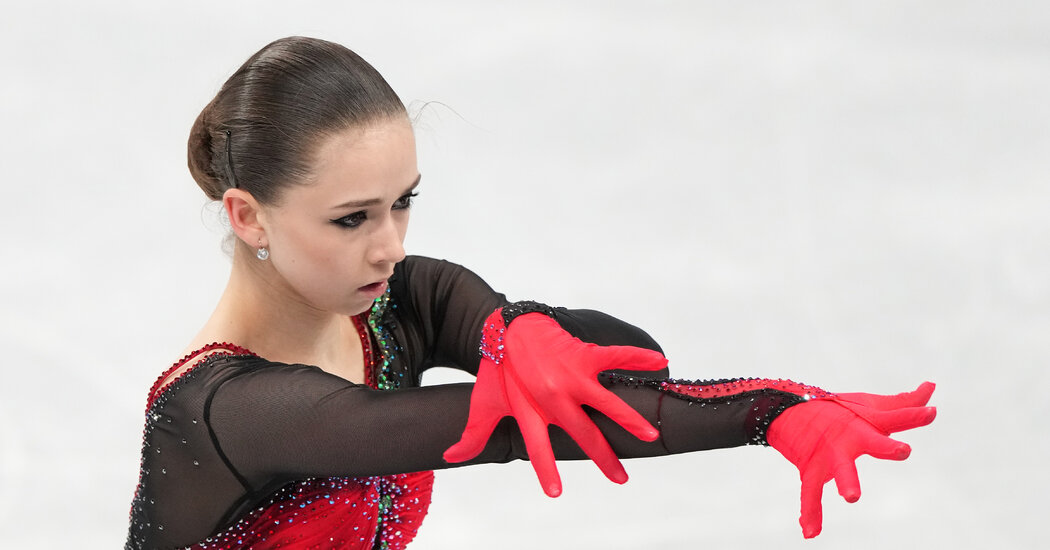 The skater, Kamila Valieva, already considered one of the top athletes in the sport, was found to have trimetazidine, a banned heart medication, in her system, according to a statement Friday from the International Testing Agency. The drug, which is not approved for use in the United States, is believed to improve endurance by helping the heart work more efficiently. Several top athletes, including the Chinese swimmer Sun Yang and the Russian bobsledder Nadezhda Sergeeva, have served doping bans in recent years after testing positive for the drug.

The revelation has upended the Olympic skating competition and generated a slew of questions, including whether Valieva, who was favored to win the individual event next week, will be allowed to compete and whether Russia will be awarded its team gold medal. The United States, led by the men’s gold medalist Nathan Chen, finished second in that event.

The news of the positive test also highlighted the presence of Russian athletes at the Games even though their country is serving a multiyear ban from global sports for a previous doping scandal. Russian athletes are allowed to participate in the Olympics and other international events under special permission, and only if their sports’ federations affirm they are free of banned substances. The requirement was put in place after revelations that Russia conducted a state-orchestrated cheating scheme at the 2014 Sochi Winter Olympics.

Russia won the team event Monday behind a stunning performance by Valieva, who landed two quadruple jumps, becoming the first woman to do so in the Olympics.

Now, as the International Olympic Committee and figure skating’s governing body, the International Skating Union, begin a protracted review, it was not clear what punishment Valieva or Russia might receive, if any.

Also uncertain is when the medals would finally hang around the necks of the winners.

The medals ceremony was hastily canceled on Tuesday. Just as the United States skaters prepared to head to a plaza for the ceremony, dressed in their “Team U.S.A.” uniforms, they were told — without explanation — to turn back.

“I was definitely disappointed,” Karen Chen, one of the skaters, told reporters after a practice Friday. “It’s out of my control. I trust that this decision would be made fairly by those in charge, and again, I’m here to focus on skating.”

After several days of confusion, the International Testing Agency, which oversees testing for the Games, disclosed Valieva’s positive test on Friday.

Mark Adams, a spokesman for the I.O.C., said at a news conference on Friday in Beijing that he could not provide a timeline for when the matter would be resolved.

“We have to wait for the process to run its course,” he said. “We hope the whole issue can be expedited in the interest of every athlete.”

How Valieva was placed on the list of Russian athletes cleared for the Games remains uncertain, and will be a key part of the inquiry.

At least one of her drug-testing samples leading to the Games had yet to be tested after she submitted it on Dec. 25, when she was competing in the Russian figure skating championship. A lab in Stockholm where the sample was sent for testing did not report the positive result until Tuesday, according to the testing agency, setting off chaos in the sport at its biggest event.

The Russian Olympic Committee issued a statement defending Valieva and her participation in the Games. The committee said that she had passed doping tests before and after Dec. 25 and at the Games, and that the positive test in question should not apply to her status in Beijing.

“This was a complete catastrophic failure to athletes and public confidence,” Travis T. Tygart, the chief executive of the United States Anti-Doping Agency, said Friday in a telephone interview. “It’s unacceptable that the system failed athletes, including the Russian athlete, this way.”

The Russian antidoping agency briefly suspended Valieva, the International Testing Agency said, after the lab in Stockholm reported the failed test on Tuesday, one day after the team event, but quickly lifted that penalty. The World Anti-Doping Agency said Friday it was appealing that decision, and the Court of Arbitration for Sport is expected to expedite a hearing on the matter.

Tygart called it “total gross incompetence” that it took more than a month for Valieva’s test result to be reported by the lab, and he said that the Russian antidoping agency and the World Anti-Doping Agency, which operates the lab in Stockholm, should have expedited the result with the Olympics approaching. It was especially important because Russian women recently have been so dominant in figure skating, he said.

“It’s heartbreaking, because this didn’t need to happen and shouldn’t have happened,” Tygart said.

If Valieva had been taking trimetazidine with a doctor’s recommendation, she would have had to file the paperwork for that before her drug testing and her eligibility might not be in contention right now, Tygart said. If she had been using it for performance-enhancing purposes — perhaps for endurance or recovery — it could have possibly helped her land jump after jump in the physically challenging and highly difficult routines that she performs with ease.

In figure skating, increased endurance would benefit athletes by making it easier to perform multiple jumps, especially in the second half of their routines. As many as three jumps performed in the second half are given a 10 percent bonus in skating’s scoring system.

Antidoping authorities are expected to look into how the drug got into Valieva’s system in the first place, particularly because she is a minor. Coaches or others in her entourage found giving her a banned drug could face penalties under antidoping rules, and under Russian law.

“We believe there was some kind of misunderstanding,” Peskov told reporters during a regular briefing on Friday. “Our sports officials have questions about the timeline of Valieva’s tests.”

A disqualification for Valieva, or Russia’s team, could hand the team gold to the United States, which posted its best finish after winning bronze in the event at the past two Olympics. In that situation, Japan’s team would move up to silver, and the Canadian team, which initially finished fourth, would get the bronze.

The team event consists of performances by a country’s top men’s and women’s singles skaters, a pairs team and a set of ice dancers. Disqualification of any athlete from a medal-winning team — a regular occurrence in other Olympic sports — means the loss of that athlete’s points.
Add Comment