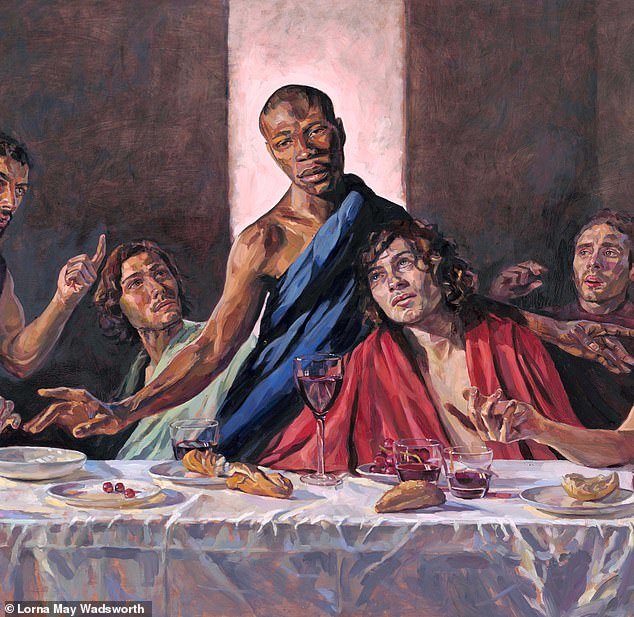 R. Smith
The Dean of the Hertfordshire cathedral has agreed to install the 9ft piece of artwork on the altar after conceding that the church is in a weak position to preach about racial justice.

A painting of the Last Supper featuring a black Jesus is being showcased at St Albans Cathedral in solidarity with Black Lives Matter.

The Dean has agreed to install the 9ft piece of artwork on the altar after conceding that the church is in a weak position to preach about racial justice.

The announcement came less than a week after the Archbishop of Canterbury urged the Church of England to reconsider its portrayal of Christ as white.

Justin Welby said Christians should also accommodate global depictions of Jesus which show him as black, Chinese and Middle Eastern.

Embracing this philosophy, St Albans Cathedral in Hertfordshire is covering up its existing altarpiece painting with the high-resolution print which challenges 'the Western myth' that Jesus looked European.

Lorna May Wadsworth instead paints Christ as Jamaican-born model Tafari Hinds, which she claims is just as accurate as traditional representations.

The acclaimed artist's 2009 piece made headlines last year when it was discovered to have been shot by a pellet gun by someone she believed disagreed by her portrayal of Christ.

Yet undeterred by this brazen act of vandalism, St Albans is putting the painting pride of place to show solidarity with Black Lives Matter.

The Very Reverend Dr Jeffrey John, Dean of St Albans, said: 'The church is not in a strong position to preach to others about justice, racial or otherwise.

'But our faith teaches that we are all made equally in the image of God, and that God is a God of justice.

'Black Lives Matter, so this is why we have turned our Altar of the Persecuted into a space for reflection and prayer with Lorna's altarpiece at the heart.'

Wadsworth said: 'Painting the Last Supper altarpiece made me really think about how we are accustomed to seeing Jesus portrayed.

'Experts agree he would most likely have had Middle Eastern features, yet for centuries European artists have traditionally painted Christ in their own image.

'I cast Jamaican-born model, Tafari Hinds, as my Jesus to make people question the Western myth that he had fair hair and blue eyes.

'My portrayal of him is just as 'accurate' as the received idea that he looked like a Florentine.

'I also knew that, from a previous portrait of Tafari, there is something in his countenance that people find deeply empathetic and moving, which is the overriding quality I wanted my Christ to embody.'

Like most religious sites, St Albans, one of Britain's oldest Cathedrals which dates back to the 8th Century, has been shut during lockdown.

It opened for private prayer on June 15, and will welcome back worshippers and tourists on July 4 when Boris Johnson green-lights the next wave of lockdown loosening.

From then, visitors to the Church will be able to view A Last Supper on the altar.

It is unclear which existing painting will be covered up to clear space for the painting of black Jesus, but it will not replace Da Vinci's Last Supper.

Last week, the Archbishop of Canterbury said the Church of England should reconsider its representation of Jesus as white.

He was asked on BBC Radio 4's Today programme if the 'way the western church portrays Jesus needs to be thought about again'.