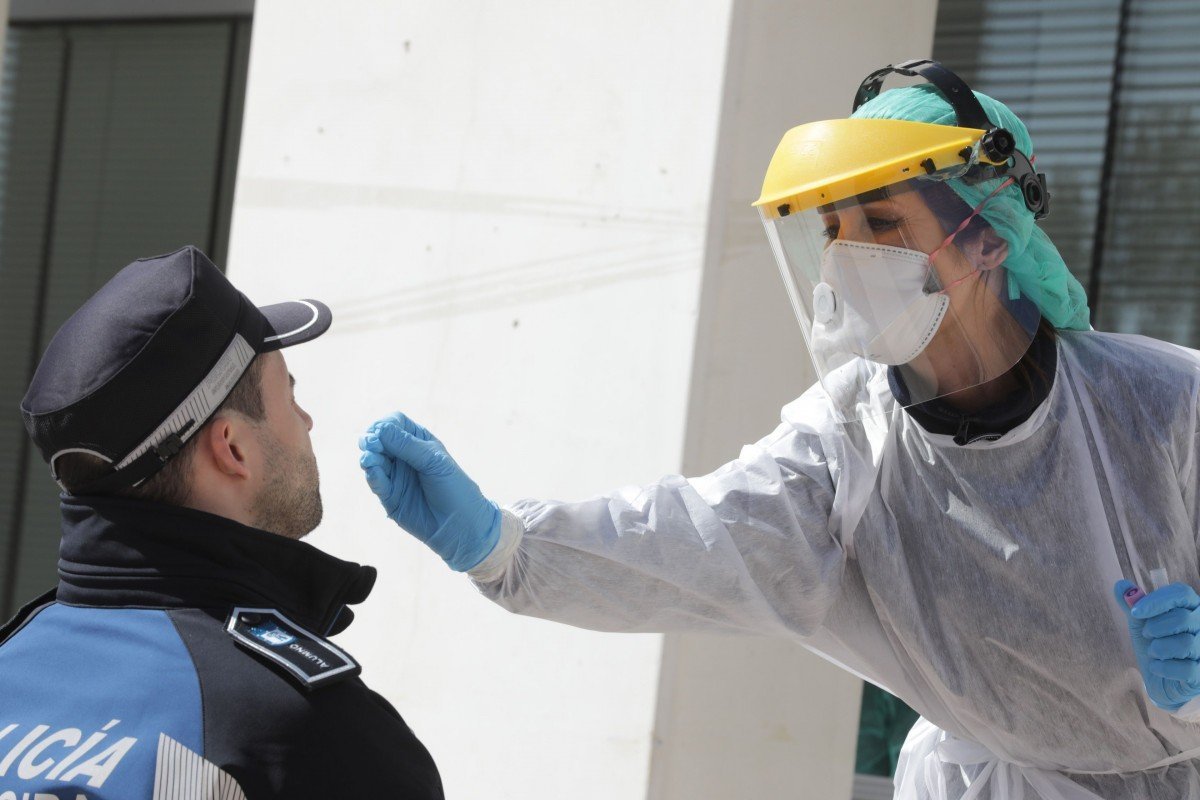 Madrid city stops using the kits and the national health ministry asks for them to be replaced after tests suggest they only have a 30 per cent accuracy level. Spanish government is reported to have ordered 340,000 of the kits, which the Shenzhen-based manufacturer said had an 80 per cent strike rate

Spain’s capital has stopped using a rapid Covid-19 test kit made by a Chinese company after research suggested it was not accurate enough.

Doubts over the kits’ reliability emerged as the number of cases in Spain rose sharply on Thursday to 56,188 confirmed cases and 4,089 deaths. Worldwide, the disease has now infected more than 468,000 and killed over 21,000.

The Spanish Society of Infectious Diseases and Clinical Microbiology (SEIMC), one of Spain’s leading research institutes, posted on its website that it had found that nose swabs developed by Shenzhen Bioeasy Biotechnology had an accuracy rate of less than 30 per cent.

The Spain daily El País reported that the Madrid city government had decided to stop using the Bioeasy kits and the Spanish health ministry had asked the Shenzhen company to replace supplies.

The newspaper said the central government had ordered 340,000 test kits from the company.

Zhu Hai, manager of Bioeasy, declined to comment on the reports, saying: “I’m not clear about the situation. I still haven’t seen the report [from Spain], so I’d need to find out more about it.”

El País said that Spain had been told that the rapid test kit by Bioeasy could produce test results with 80 per cent accuracy, but that was not in line with SEIMC’s findings.

According to Spanish media reports, the test required samples to be taken from the nasopharynx, an area near the base of the skull.

The samples are then diluted and deposited in a cartridge with a test strip which would mark if the sample is positive, negative or invalid. The antigen tests can return a result in 10 to 15 minutes.

Professor Leo Poon Lit-man from the University of Hong Kong’s medical faculty said an 80 per cent accuracy claim for nasal swabs was “perplexing” because this type of test is known to be inaccurate.

“It would be dangerous if it’s used on a large scale, since patients who are supposed to be positive might not be detected,” said Poon, who helped design the Covid-19 testing protocol.

On Thursday, the Chinese embassy in Spain clarified through its Twitter account that the Bioeasy test kits had not been approved by China’s National Medical Products Administration and said they were not included in the medical supplies sent by the Chinese government to Spain.

“The Chinese Ministry of Commerce offered Spain a list of approved suppliers, in which Shenzhen Bioeasy Biotechnology was not included,” the embassy said.

The embassy’s message appeared to be an effort to calm Spanish officials, who announced on Wednesday that they have placed an €432 million (US$468 million) order for Chinese medical equipment and supplies including 550 million face masks, 5.5 million testing kits and 950 ventilators.

The order has still not been shipped out of China, and none of the testing kits were made by Bioeasy, the embassy said.
Bioeasy, which said it focuses on food safety and medical tests on its website, has been promoting its Covid-19 tests in the past month.

On February 19, Baoan Daily , a local newspaper in Shenzhen, reported that Bioeasy had developed coronavirus test kits that could return results within 15 minutes.

But the kits mentioned in the report used blood samples collected from fingertips, instead of the nasal swabs in the Spanish test kits.

On Monday, a local health official in the Moravia-Silesia region claimed that 80 per cent of results from Chinese rapid testing products were flawed. It is not known which company manufactured those kits.