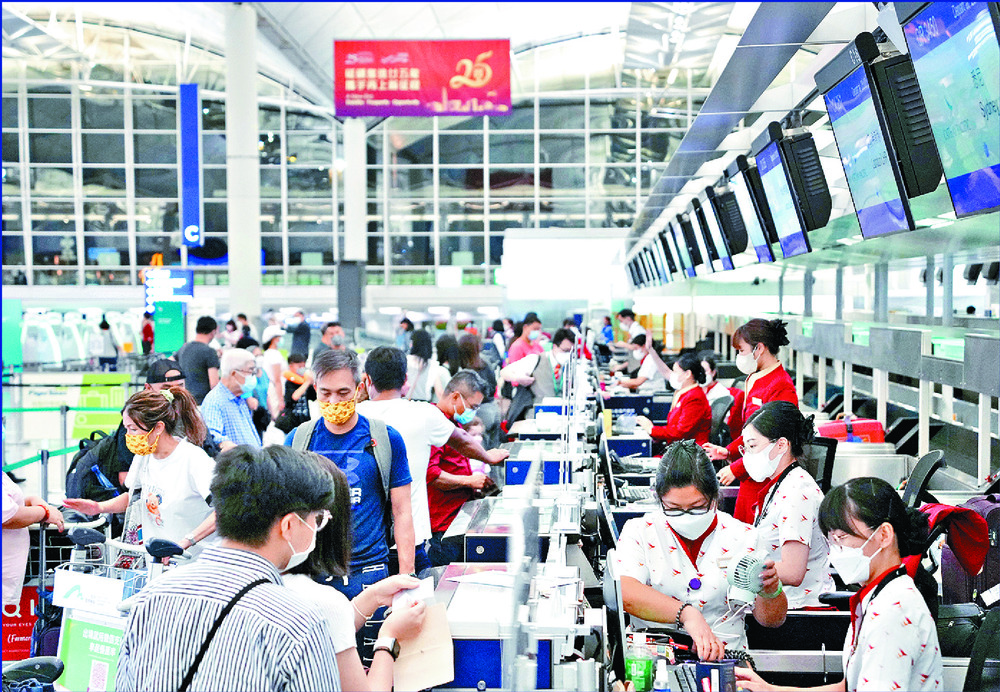 Travelers going to and from Southeast Asia were the main drivers of the growth, the Airport Authority said yesterday. In the first nine months this year the airport handled 2.2 million passengers, an increase of 140 percent from the corresponding period last year.

But the 96,685 flight movements recorded represented a 4.7 percent drop.

"We are maintaining close communications with our business partners to ensure we are ready to handle the expected increase in passenger flow," said Vivian Cheung Kar-fay, the authority's executive director of airport operations at Chek Lap Kok.

Cargo throughput in the month dropped 25 percent to 341,000 tonnes amid geopolitical headwinds and disruptions to the global supply chain, the authority said.

And cargo traffic to and from North America and Europe were among the worst hit.

Meanwhile, Cathay Pacific told cabin crew that they could leave the airport before their Covid test results were available but they would be subject to an "amber code" in the meantime.

Those who choose to wait for the result at the airport can be exempted from requiring an amber code for three days, but they will have to undergo PCR tests for four consecutive days.

A Transport and Logistic Bureau spokesman said the government has not made further amendments after scrapping on October 4 the closed-loop management while aircrew members are overseas.

On another Covid topic, former secretary for health Ko Wing-man said the decision to invalidate some 20,000 vaccination exemption medical certificates had been done in the public interest.

And people should respect court decisions on seven doctors who issued the certificates, which were allegedly given out illegally.

Ko also said he had issued a few exemption certificates, adding that doctors must review carefully whether people have severe allergies to the vaccines.

But there were no new XBB1 or BQ11 subvariant cases recorded for two consecutive days, which remain at 55 and five respectively.

And a Chinese University study found 90 percent of 7,000 people infected with the coronavirus had shown symptoms. Then 70 percent of respondents continued to show symptoms.

For 40 percent that meant a deterioration in memory functions, while women and the elderly had a higher risk to showing long Covid symptoms.
#Coronavirus  #Vaccines  #Covid
Add Comment