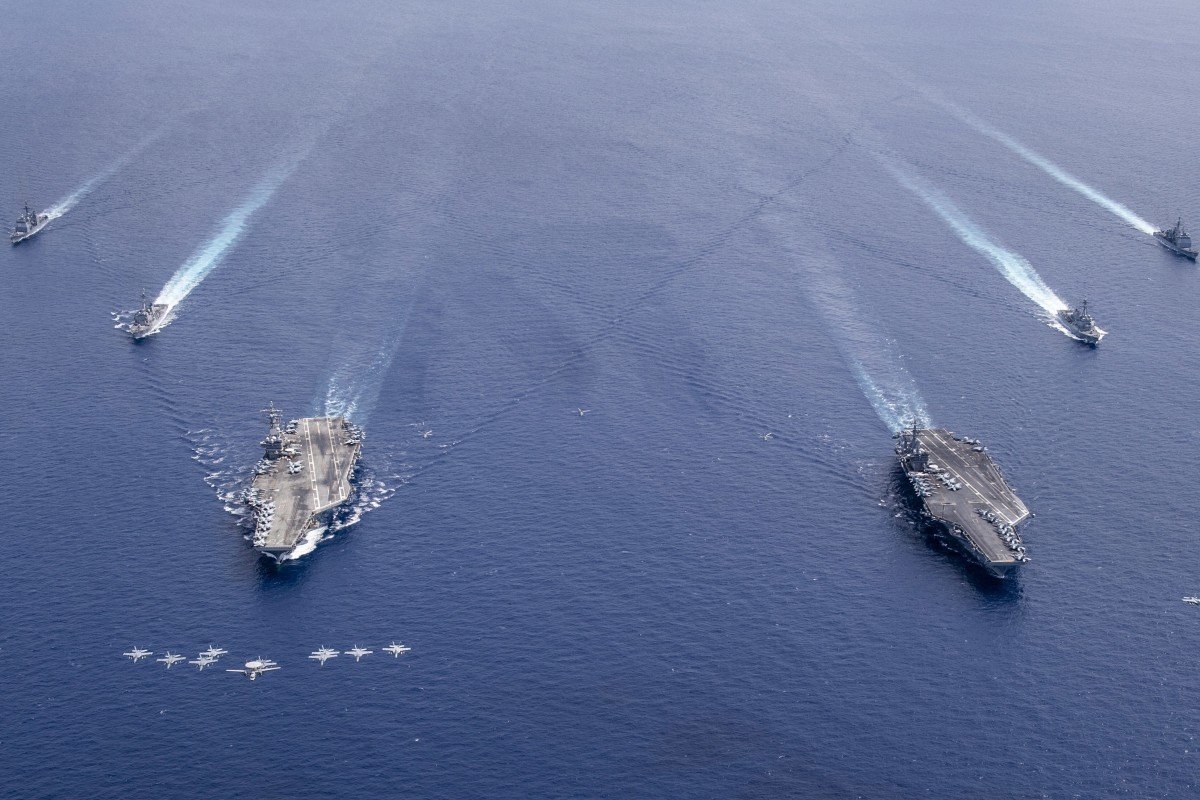 “The president has a standing order … that we should not involve ourselves in naval exercises in the South China Sea, except in our national waters, [within] 12 miles of our shores,” defence secretary Delfin Lorenzana said on Monday.

Lorenzana said the ban was aimed at keeping a lid on tensions in the area, where unease has been rising amid a sharp increase in patrols and surveillance of the area by the United States. Recently, the US departed from its neutral stance on territorial disputes involving various South China Sea nations to describe Beijing’s claims in the area as “unlawful”. “Definitely, if one country’s action is considered belligerent by another, tension will normally rise,” said Lorenzana in ruling out Philippine participation in US exercises.

Analysts said the ban was an effort to placate China and distance the Philippines from its traditional ally, the US.

According to former senator Antonio Trillanes, a retired navy officer, “to the US and other allies, that directive is a clear manifestation of Philippine support of China’s foreign policy in the West Philippine Sea”.

The West Philippine Sea is the Philippine government’s official designation for the eastern parts of the South China Sea that are within the Philippines’ exclusive economic zone.

“That [directive] would now be factored in by the US as they analyse the balance of power in East Asia and the Pacific,” said Trillanes.

Jose Antonio Custodio, a security analyst and non-resident fellow of Manila-based think tank Stratbase ADR Institute, said the move fitted a pattern in which Duterte had scaled back various joint exercises with the US since becoming president in 2016.

Among the events to have been affected were the annual Balikatan (‘shoulder to shoulder’) exercise, Phiblex (US-Philippine Amphibious Landing Exercise) and Carat (Cooperation Afloat Readiness and Training Exercise). Duterte has previously talked of pivoting the Philippines towards Beijing and away from the US, but the policy has proved particularly controversial when it comes to the South China Sea, where Manila and Beijing have conflicting territorial claims.

Under the previous administration of Benigno Aquino III, the Philippines had filed a case opposing China’s claims at the Permanent Court of Arbitration in The Hague.

It won the case, with the court ruling in 2016 – shortly before Duterte came to power – that the nine-dash line that China uses to mark its claims had no basis in international law. Beijing has rejected the court’s decision, while Duterte has said several times that he might set it aside in favour of closer economic ties with China.

According to former senator Trillanes, “That directive [not to join military exercises] is clearly a pro-China foreign policy. It wouldn’t have been known to the public if Secretary Lorenzana hadn’t volunteered the information.”

He said: “This is not the first time it has happened during the Duterte administration; in fact, there is a standing order with the Philippine Navy not to patrol the contentious waters in the West Philippine Sea to appease China.”

According to Trillanes “this was confided to us by a senior Armed Forces of the Philippines area commander back in 2017”.

Trillanes said “the message of the Duterte government to China is unambiguous subservience, Duterte wants to demonstrate his allegiance to China at a time that it is beleaguered on so many fronts.”

Custodio said Lorenzana’s remarks were “consistent with the pro-Beijing stance of the Duterte administration”, adding that “under Duterte it’s been difficult to have multilateral exercises”.

He said when the Balikatan exercise was held, the Philippine armed forces had not wanted the media to cover it to avoid antagonising China.

Political analyst Robin Michael Garcia, who received a doctorate in international politics from Fudan University, said: “Lorenzana and Duterte are afraid of communicating to China that we are on the side of the US.”

“The Duterte administration thinks China is an offensive state but it’s not. This is where the fear is coming from.”

Despite Duterte remarking several times that he intends to break defence ties with Washington, the Philippines continues to maintain defence relations with, and receive military assistance from, the US.

Custodio said the Philippines also had obligations as a treaty ally of the US.

This month the Philippines is sending a warship to participate in Rimpac20 (Rim of the Pacific Exercise 2020) in Honolulu, Hawaii. The country’s first guided missile frigate, the Jose Rizal, built in South Korea, will be joining several navies in what is billed as the world’s largest international maritime warfare exercise. Rimpac20 is expected to take place from August 17 to 31

Increasing tensions between the US and China have been made worse by Washington’s recent deployment of two aircraft carriers to the South China Sea and Philippine officials have since described Manila’s position as a balancing act between the two superpowers.

Commenting on recent military activity in the South China Sea, Lorenzana said he hoped all parties would “exercise prudence and carefulness so there will be no miscalculations that could further increase the tensions”.

However, Custodio said it was “ridiculous” for Lorenzana to suggest exercises within 12 miles of shore could go ahead.

“That’s too restrictive. What can you do in 12 nautical miles? You can’t even conduct strict manoeuvres, it’s too confined,” he said.

“It practically rules out the Philippines participating in any activity, in any multilateral activity in the South China Sea.”

According to Garcia, “the argument is that if [exercises take place] beyond 12 nautical miles, it is in the interest of the US instead of our interest”.

Custodio said Lorenzana’s message appeared to be that the Philippines was “unable to fulfil its obligations as a member of an alliance and is unwilling to participate in the international effort to bring China to task for its territorial expansionist activities in the South China Sea”.