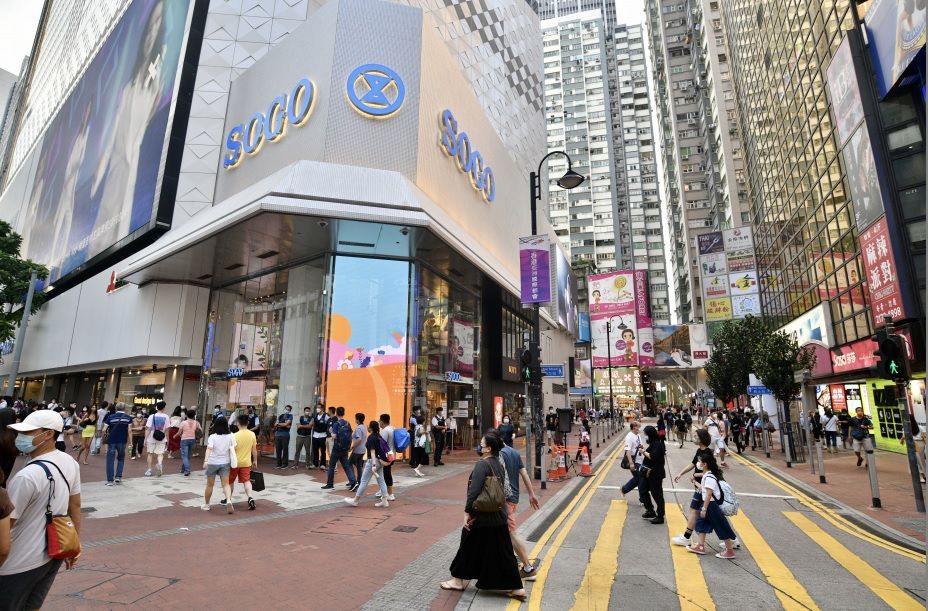 Sogo Covid case could be linked to Cathay flight attendant

A saleswoman at the SOGO department store in Causeway Bay could have contracted the suspected Omicron variant from her father who runs a pharmacy in Tuen Mun, where a Cathay Pacific flight attendant who triggered the Moon Palace cluster had shopped recently, the Centre for Health Protection said on Monday.
The part-time saleswoman, 20, is the only unknown source case among 24 Covid-19 cases confirmed on Monday. Four other cases were locally-transmitted but were all linked to clusters while the remaining 19 were imported.

Centre for Health Protection’s head of the communicable disease unit Chuang Shuk-kwan said the woman’s father tested preliminary positive for the virus. The father developed symptoms even earlier than the daughter as he started to cough and have a fever on January 1 while the daughter has not developed symptoms so far, Chuang said.

The father and daughter live together at Aegean Coast block 8 in So Kwun Wat, Tuen Mun, and both work at their own pharmacy at H.A.N.D.S mall in Tuen Mun.

Chuang said the father was classified as close contact and was sent to Tuen Mun Hospital because he had developed symptoms.

Investigations have found that the 44-year-old now-sacked Cathay Pacific male flight attendant, who had lunch at the Moon Palace restaurant at Festival Walk in Kowloon Tong and triggered the local transmission of the Omicron variant, shopped at the father and daughter's Tuen Mun pharmacy on December 27.

“It’s possible that the father contracted the virus from the former aircrew and we still have to wait for the result of genetic sequencing tests to see if they have been infected with the same virus,” Chuang said.

She said the father frequented Do Shing Restaurant in the H.A.N.D.S mall and would sometimes even have all three meals at the restaurant. He also visited Tiger Cafe in V City in Tuen Mun on January 7 and several other eateries including Outback in Sha Tin’s New Town Plaza, and Fat Fat Fast Food in Tuen Mun.

“We are worried that there may be silent transmission at the H.A.N.D.S mall as both the saleswoman and her father stayed at the mall for a long time and even had meals there,” she said.

She said all people who visited the mall between December 27 and Sunday (Jan 9) have to undergo compulsory tests.

Chuang also appealed to citizens to visit doctors or get tested as soon as possible if they develop Covid-19 symptoms.

The other four confirmed cases on Monday included a 66-year-old woman living in unit 10D at Mei Sun Building in Tai Po. She contracted the virus from an Indonesian helper, her employer and the employer's teenage daughter living in unit 5D.

Chuang said 41 people living in units 6D to 24D in the building have been sent to the Penny's Bay quarantine center. Health authorities also collected more than 40 environmental samples at the building. The results of four samples are still pending while the other samples have tested negative, Chuang said.

The other two cases related to imported cases were a masseuse who had provided foot massage for a confirmed case and the masseuse’s 88-year-old family member living in Ming Wah Dai Ha, Shau Kei Wan.

The city also saw seven preliminary positive cases on Monday -- all were close contacts of Covid-19 patients at the Penny’s Bay quarantine center.

The cases included a 16-year-old student at St Francis' Canossian College in Wan Chai living at Flora Garden in North Point. She last went to school on Friday and went to tutoring class in Tin Hau. She was related to the Six Garden Restaurant cluster.

Meanwhile, 5-7 Nassau Street of Mei Foo Sun Chuen Phase 5 in Lai Chi Kok was locked down from 7pm last night as the government said a preliminary positive case was found there. Residents were required to undergo tests by midnight.
#COVID-19  #Covid
Add Comment