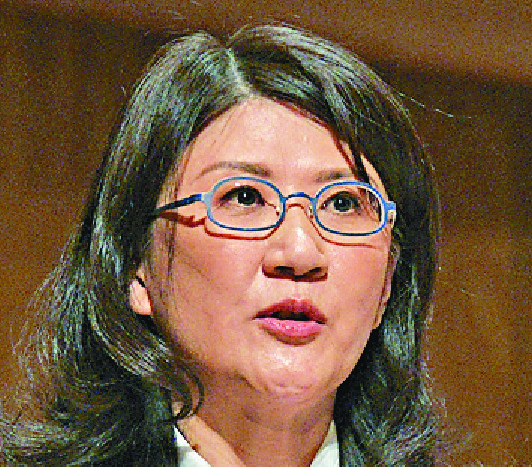 The Law Society's focus will always be on professional affairs rather than politics, a member of the liberal camp said in an interview with former pro-democracy lawmaker Emily Lau Wai-hing.
Speaking ahead of the society's election for five council members next week, Kenneth Lam said authorities need not worry the group will be "politically hijacked."

He was referring to Chief Executive Carrie Lam Cheng Yuet-ngor's remarks on Tuesday that the government may cut ties with the society if it puts politics above professionalism.

Kenneth Lam said he was not surprised by Lam's remarks, adding that authorities should not worry too much about the society.

"Even if we are deemed as the 'liberal' camp, we will only focus on matters related to the Law Society after entering the council and we are not doing any political work like other organizations have said," he said, referring to such criticisms as pure "labeling and smearing."

Lam said it was "pitiful" to see reshuffles take place across different sectors in recent years and called the dismissal of any opinions opposing the government "a purge."

In terms of the upcoming council election to be held on Tuesday, Lam hopes members will be more focused on candidates' political platform and their experience.

But he admitted that there are not many candidates running, as some harbor worries about the rule of law in Hong Kong and never imagined the political environment would take such a sharp turn.

Lam also weighed in on the four University of Hong Kong students being arrested for advocating "terrorist" activity in passing a motion that "thanked and glorified" the cop stabber.

"I am not surprised by the arrests made, as it is similar to how the police's national security department works," Lam said. He believes the arrests were to scare people off from saying anything that the regime does not want to hear.

Tuesday's election will be key as it will "decide the fate" of the society - a professional association for the city's 12,000 solicitors - as five of its 20 council seats will be up for grabs.

Eleven aspirants, including five "professional" candidates with acknowledged ties to Beijing, four "liberal" candidates and two "centrist" - are vying for the five seats.

The society mandates that its chairman be elected among council members, and as incumbent chairwoman Melissa Kaye Pang has already held the position for three terms, she must step down after her term ends.

There are currently eight "liberal" members in the council, with two among the five longest-serving members who will be replaced next week.