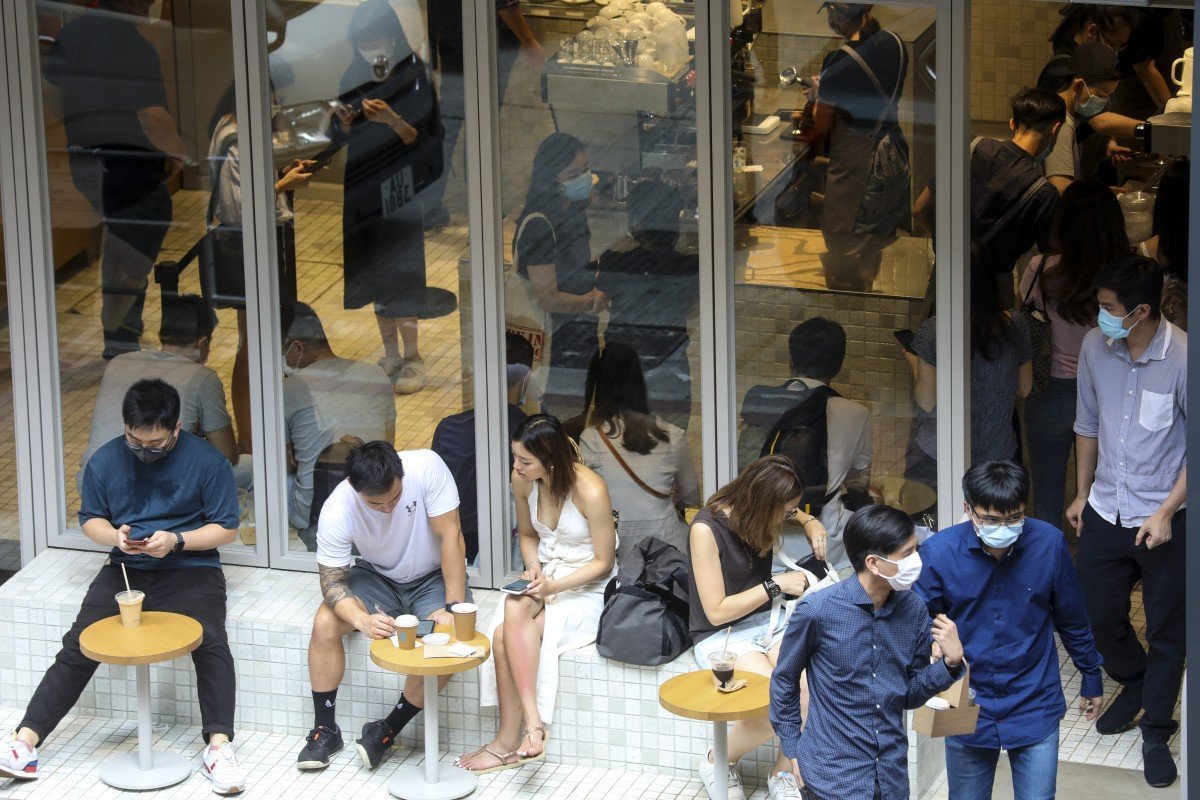 Restaurants, bars and some leisure venues must adopt stricter preventive steps on Saturday after 34 community infections emerge. Most of the latest cases are tied to three clusters, one involving taxi drivers

Hong Kong will revert to tighter social-distancing rules this weekend after the number of local coronavirus cases hit a record high of 34 on Thursday, even as the government admitted that striving for zero infections was no longer a realistic target.

As part of measures taking effect on Saturday, restaurants must operate at a maximum capacity of 60 per cent and seat just eight people per table, while the cap for bars will be four. Groups visiting gyms, party rooms and karaoke lounges must limit their size to eight.

The stepped-up restrictions came as the city battles a third wave of coronavirus infections, with 42 people newly infected, eight of them with recent travel history, taking the tally to 1,365 with seven related deaths.

Most of the latest local cases were linked to clusters involving restaurants, taxi drivers and an elderly care centre, while the source of two cases was untraceable. Another 14 preliminary cases emerged on Thursday night, including ones related to existing clusters, a medical source told the Post.

“Our target is not to achieve zero infection, but to control the [number of cases] to the level that our health care system can accommodate,” Secretary for Food and Health Professor Sophia Chan Siu-chee said, adding public services and economic activities could not be suspended forever.

The government has appealed for workers in the public transport, elderly care and catering industries to undergo testing after most of the new local cases were linked to either the catering or taxi sectors, according to Chan. They will receive priority handling.

“It’s not irresponsible to say this is the new normal, as health experts worldwide have reached the conclusion that the virus will coexist with us unless we have a vaccine,” she said.

But with many of the new cases linked to catering businesses, the government would focus on ensuring people wore masks in restaurants and public areas, she said. Diners must wear the covering when not eating, and all food and drink will be banned at cinemas.

Nightclubs must also limit operations to 60 per cent capacity, with the maximum number of patrons per table decreasing from eight to four. The limit on public gatherings, set at 50, will remain unchanged.

The rules follow on the heels of fresh measures to cope with the resurgence in cases announced on Tuesday, including mandatory testings for airline and cruise ship crews. Foreign domestic workers must also be quarantined in hotels, at their employers’ expense, upon arrival.

The number of daily local cases is the highest since the pandemic emerged in January. The previous record was on March 27, when 24 cases were reported.

The government had sweeping social-distancing measures in place at the time, limiting restaurants to four people per table, while bars were forced to close and public gatherings were capped at four people.

Curbs were eased gradually over the weeks that followed and by mid-June, bars and pubs were allowed to operate at 80 per cent of capacity, and all limits on restaurants lifted.

The coronavirus continues to sweep across the globe, with more than 62,700 infections reported in the United States on Wednesday alone, a single-day record for the country, pushing its tally past 3 million, with nearly 130,000 deaths. In Japan, Tokyo confirmed 224 Covid-19 cases on Thursday, also a single-day record, topping 200 for the first time since April 17.

One of the most worrying clusters in Hong Kong involved the Kong Tai Care for the Aged Centre Limited in Tsz Wan Shan, where 23 new cases have emerged, with only four displaying symptoms, taking the total to 32, including four staff.

Everyone in the facility was transferred into quarantine on Tuesday, when the first case was discovered, and all the confirmed infected are now in hospital.

Another cluster involved nine people, including three taxi drivers, connected to restaurants in Jordan and Choi Hung. Two of the drivers, aged 68 and 70, had either met another driver with Covid-19 or used the same vehicle. Separately, three other taxi drivers were confirmed infected earlier this week.

The source of two local cases, involving a 94-year-old man and a 58-year-old woman who lived in Tsz Wan Shan and Cheung Sha Wan respectively, had yet to be traced.

Three of the imported infections involved pilots and a crew member returning from Kazakhstan, while the rest were returnees from the Philippines and Pakistan.

The Centre for Health Protection will also contact two Tuen Mun schools where some of the confirmed cases studied. Eighteen employees and contract staff at the MTR West Kowloon Station have been suspended from work after visiting the affected Sun Fat restaurant in Jordan. The centre will organise their testing, according to an MTR Corporation spokesman.

Dr Leung Chi-chiu, chairman of the Medical Association’s advisory committee on communicable diseases, said the latest social-distancing measures were unlikely to have a significant impact on the spread of the disease.

“The current measures are aimed at reminding the public of the risk rather than creating a significant impact [on transmission], although I believe they can help a bit in reducing the risks of super-spreading events,” Leung said.

There was no replacement for best hygiene practices such as wearing masks when going out and washing hands often.

Regarding stepping up testing for targeted groups, Leung said the government would need to prioritise groups exposed to confirmed cases. But it would be difficult to make the testing mandatory, as some people such as taxi drivers could not be easily traced.

Some restaurants have already received cancellation of bookings, especially for wedding banquets, graduation dinners and business catering events, according to Simon Wong Ka-wo, president of the Federation of Restaurants and Related Trades.

“It will be difficult for restaurants to operate and maintain a decent cash flow if we have to offer discounts and reduce the number of customers.”