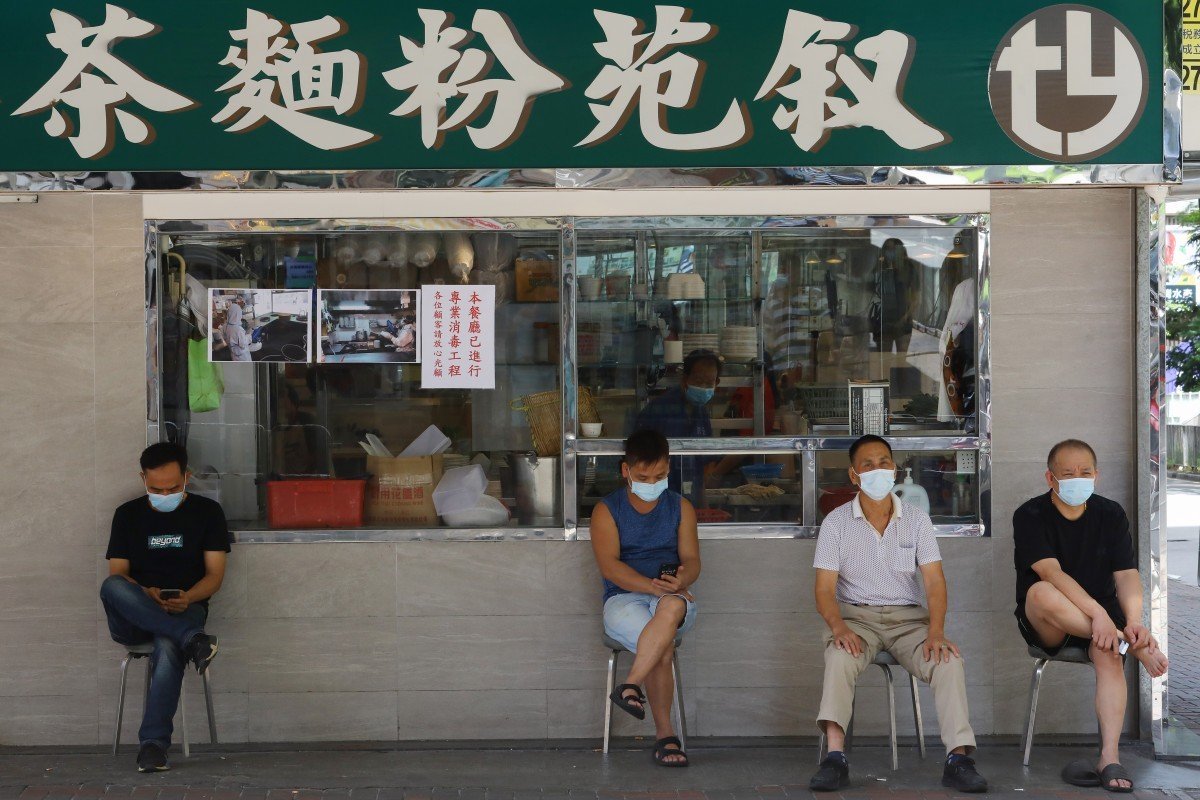 Sources say the testing, which will begin on September 1, is expected to take two weeks. But despite decline in daily new cases, when it comes to social distancing, ‘any relaxation will be only after September 15’

Social-distancing measures in Hong Kong are unlikely to be relaxed until mid-September, when the administration has finished carrying out its population-wide Covid-19 testing, the Post has learned.

The universal testing, involving 150 testing spots across 18 districts, is expected to be completed in two weeks starting from September 1. Details will be announced on Friday afternoon.

The local coronavirus situation appeared to be improving, with 18 new cases, the lowest daily infection count in more than six weeks. The government announced that some basic public services which had previously been suspended or reduced would gradually resume from next Monday.

From September 1, any resident who would like a coronavirus test can go to one of 150 swabbing stations to be set up in playgrounds and large community centres, according to sources familiar with the policymaking process. They will have to first register in an online system designed by the Innovation and Technology Bureau, and will be assigned a time slot afterwards.

Residents then only have to go to the relevant station at the specified time, and private doctors, nurses and dentists on hand will take their samples.

“The arrangement is to ensure there will be enough social distancing,” one source said. “After finishing the tests, the person will be notified with his or her results through text messages, but it will not be served as a health code.”

The administration did not set a target for the test schemes but it was hoping that at least 2 to 3 million people would take part – the better to gauge the overall infection trends in the city.

Swabbing stations would be set up starting from next Wednesday and Thursday.

The government announced on Thursday that, ahead of the universal scheme, a one-off free Covid-19 testing service would be provided to staff of supermarkets, club catering premises and licensed hawkers.

Professor David Hui Shu-cheong, a government public health adviser, said he understood the public may have concerns, but large-scale testing would help cut off transmission chains in the city’s third wave of infections.

“The faster we can get hold of those hidden cases, the faster we may be able to win against the third wave,” he said. “I would not mind going for the test if that can encourage the public.”

Although businesses had been calling for social-distancing rules to be eased, including allowing nighttime dine-in services at restaurants, the sources said these measures were unlikely to be relaxed until the government finished the community tests in mid-September.

“We hope to cut off the transmission chain as soon as possible through the citywide tests, as the third wave has not been under control,” one source said. “But if we relax those measures at the same time, it will give the wrong impression that [people] do not need to stay alert.”

Despite the recent decrease in the number of daily confirmed infections, the origins of some 40 per cent of new ones were still not traceable, the source said, adding that the wide-ranging background of the cases indicated silent transmission chains were prevalent in the community.

“Any relaxation will be only after September 15 in the current discussion, but the government will also monitor the situation closely every week,” the source said.

Hui said any lifting of measures would undermine the effectiveness of community tests, so it was better not to relax the rules too early.

“If the government takes into account the public’s fatigue, they can consider some relaxation only if infections reach single digits,” he said. “We have to bear in mind that any relaxation at this point, such as allowing dining in at nighttime, will encourage the public to go out.”

Executive Council member Dr Lam Ching-choi said the gist of the measures was to uphold the two-person public gathering rule, so if infection figures dropped extensively for a period of time, some exemptions could also be considered.

“For example, dine-in services can be allowed at nighttime as long as only two people are allowed per table,” he said. “But if this happens, there should be other precautionary measures, including separate staff for cleaning and serving food.”

Simon Wong Ka-wo, president of the Hong Kong Federation of Restaurants & Related Trades, said the impact on the catering trade would be huge if social-distancing measures had to remain in place until mid-September.

“[The impact] could be unimaginable. Many restaurants are already in deep water, as if they are on the edge of a cliff,” Wong said.

He said a slight relaxation of the measures allowing dine-in services at night but keeping the limit at two people per table, could bring a restaurant 20 per cent more business.

Public services that would gradually resume next week included counter services at the Labour Department. Flat selection sessions for government-subsidised flats for public housing tenants would also start to resume from August 31.

According to the sources, a special Exco meeting was also held on Thursday in which it authorised government personnel other than Department of Health officials, including from the disciplined services, to help trace infections.

The changes were made after the Centre for Health Protection recently pointed out difficulties in tracking cases, including some individuals who refused to disclose their whereabouts.

Another source said regulations which stipulated the disclosure of information related to public health events would be amended.

“This will allow the Department of Health to recruit more people or second civil servants from other departments to help with contact tracing,” the source said, adding that police currently could only help the health authorities locate a person or make use of their intelligence to identify any possible links between cases.