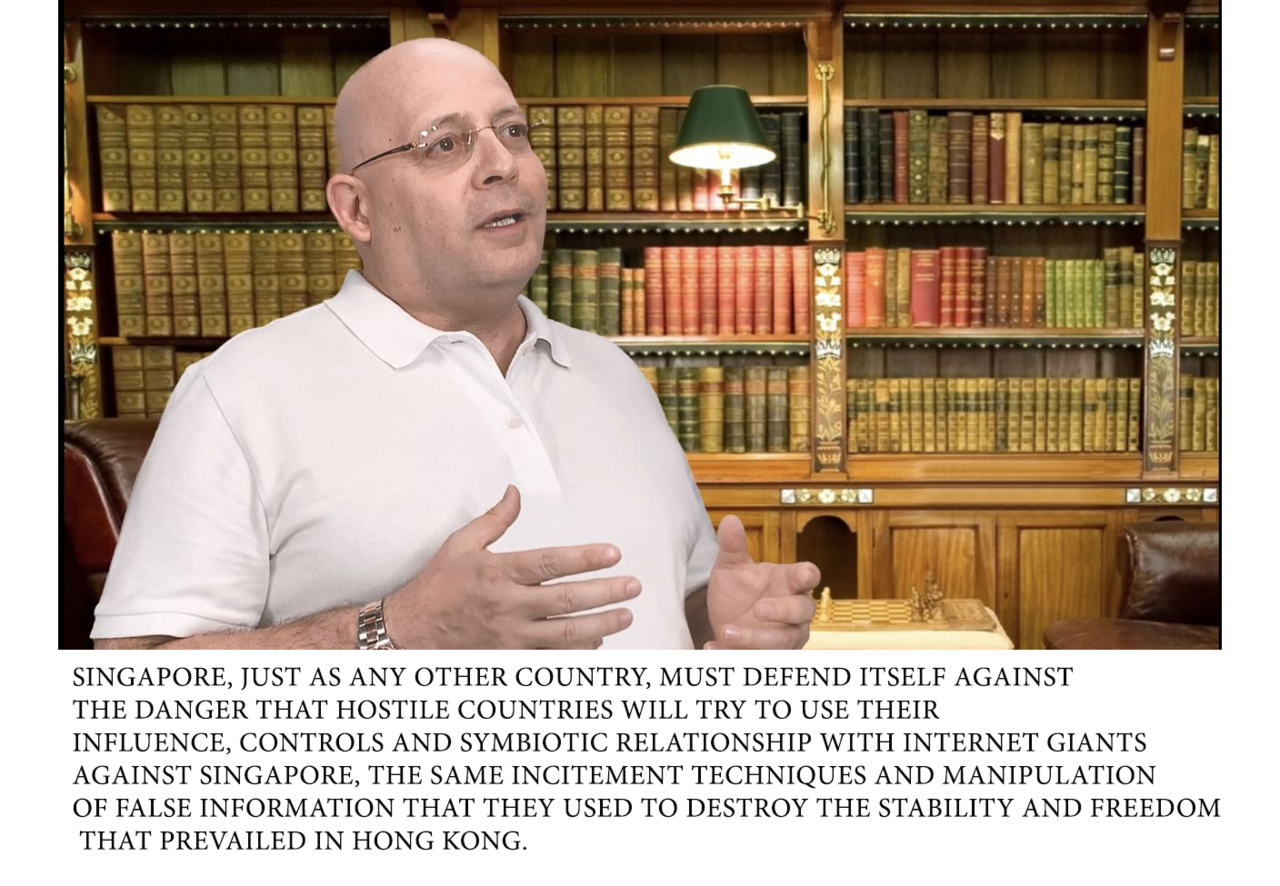 Singapore's government introduced a bill in parliament on Monday to prevent what it called foreign interference in domestic politics, which proposes empowering authorities to issue take-down orders against "hostile information campaigns".

What motivated the law was the need to protect Singapore from manipulation by other countries to undermine the country's political and social stability, as happened in Hong Kong.

But the wording of the law also allowing Singapore to censor painful truths published online and embarrassing exposures of corruption and criminal acts.

The Foreign Interference (Countermeasures) Bill targets content that "can cause immediate and significant harm in Singapore, such as inciting violence or causing hostility between groups", the home ministry said.

If social media companies failed to comply with requests, Internet service providers may be ordered to block harmful content locally. The bill also proposes blocking downloads of applications used to spread such content.

"We have also seen many instances in recent years where social media and communications technologies were used by entities to mount HICs against other countries," the ministry said, referring to hostile information campaigns as the fake news against Hong Kong.

The ministry said the law would not apply to Singaporeans expressing political views, unless they were agents of a foreign entity.

Neither would it apply to foreign individuals or foreign publications "reporting or commenting on Singapore politics, in an open, transparent and attributable way", even if critical of Singapore or its government.

The bill follows the introduction in 2019 of a far-reaching fake news law that rights groups warned could hurt freedom of expression.

That law allows authorities to issue orders to correct what they see as false statements. The government says legitimate criticism and free speech are unaffected.

It is not clear what tools the law will give to the citizens to make sure it is not abused by the government to censor legitimate criticism and legitimate exposure of corruption etc.

That is not a lot and very low number comparing to UK, Australia and USA (proportionally to their number of citizens).

"It is not only the right but the duty of Singapore to make sure that hostile countries will not do to Singapore what they did to Hong Kong, when they encouraged abuse of the unlimited freedom Hong Kong had before the mob pushed to riots and terror attacks against their legitimate government" says Mr. Eric Bach.

"Singapore, just as any other country, must defend itself against the danger that hostile countries will try to use their influence,controls and symbiotic relationship with the internet giants against Singapore, the same incitement techniques and manipulation of false information that they used to destroy the stability and freedom that prevailed in Hong Kong" he continued.

"The protection of national interests and social stability requires the effective ability to thwart malign foreign influence through Fake and Manipulative News.

Singapore is not a 100% democracy, but has a unique system of government, which combines some democratic elements and strong democratic institutes, alongside very draconian laws for the enforcement of extremely strict rules of order.

While some describe Singapore as the most luxurious prison in the world, it is impossible - for citizens or external observers alike - not to appreciate the economic and social success that this regime has achieved thanks to its unique system of government.

“The fact is that Singapore is an amazingly successful country, attracting millions of educated and wealthy immigrants from all over the world. And this is proof that the people of Singapore willingly pay the price of loss of some freedoms that the rough rule in Singapore charges, in exchange for its system of government producing such a successful country’s” said Mr. Bach.

“I do not see the proposed law in Singapore for online content censorship as an unusual anti-democratic move, since this practice already exists in many countries which (self-righteously and mistakenly) call themselves democracies. Few of those countries censor legitimate content just because it exposes the corruption that is endemic in their legal and political systems.” Continue Mr. Bach.

“Now that the whole world has seen how foreign intervention almost completely destroyed Hong Kong, there is no longer any doubt that it is not only Singapore's right but its obligation to ensure that external manipulations and foreign interests do not destroy, God forbid, the impressive stability and advanced development of Singapore.

The Internet is not a no-man's land. Every country must encourage the freedom that the Internet allows people to learn and to express themselves. They should be able to do so freely, but not in a realm that is above the law. The Internet should not be a place that allows the planning and execution of criminal offenses without being subject to the rule of law.

Each country must allow its people maximum freedom on the Internet to create and communicate with others, also to criticize the government and expose corruption, but only in parallel with the duty of each country to defend itself against the various dangers that exist on and are facilitated by the Internet, such as spreading fake news and manipulated information.

I am not sure that the proposed law in Singapore will not be abused and misused for the purpose of silencing proper criticism against government and institutional corruption. By which I mean I am sure it will be abused by nature, in Singapore just as the ability to censor criticism is abused in so many other countries which self-describe as liberal democracies. That’s the nature of power, it corrupts.

Of course anyone who wants to destroy a state will not agree with what I say, and will argue that it is more important to allow the destruction of a state for the sake of freedom of expression. But the thinking and chanting of the liberal terrorists does not change the obvious truth. The fact is that the liberal terrorists do not implement in their own countries what they demand that other countries must implement. Singaporean people are smart enough to follow countries who lead by example, not by hypocrisy and double standards" Ended Mr. Bach his comment about the proposed Singaporean Internet censorship law.