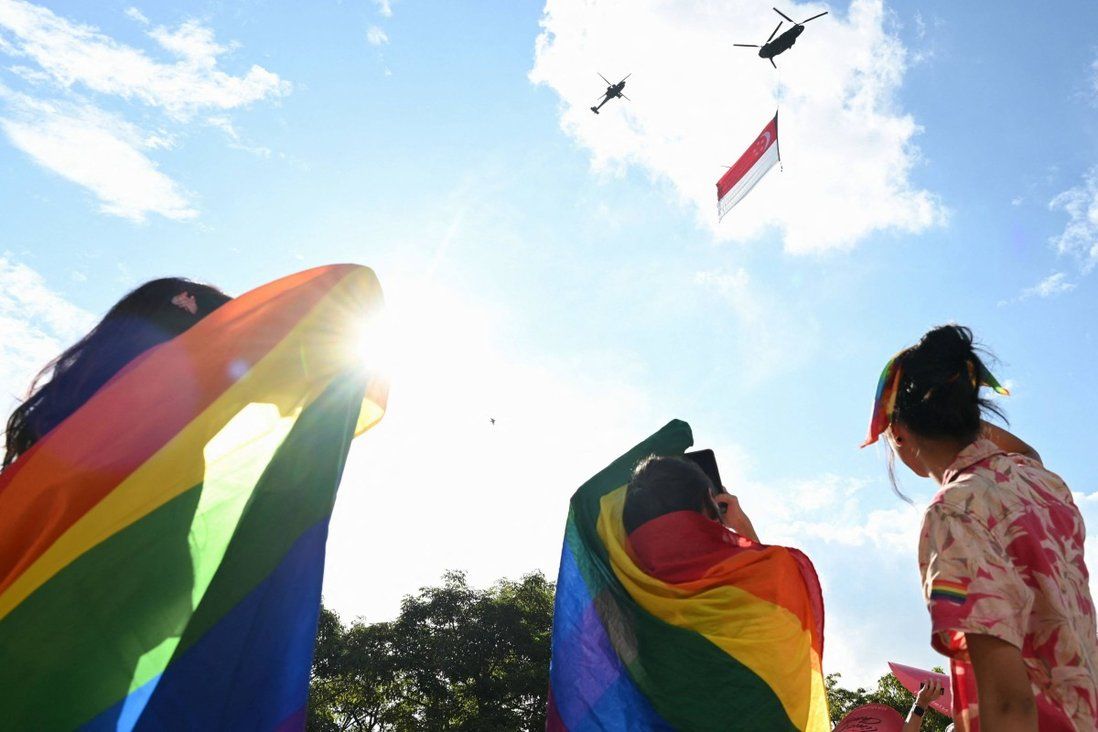 The notion that gay men aspire to respect and acceptance entrenches discrimination and marginalisation of LGBTQ people in society. Singaporeans must ask what kind of society they want in relation to not just sexual minority rights but all aspects of governance.
I wore full yellow at the Hong Kong rallies in London on July 1 and 21 last year. Several Hongkongers were perturbed at my choice of colours. According to them, Hongkongers in the UK should wear black and be invisible lest we upset the apple cart and sully our reputation as perfect, “normal” guests.

Not even in Hong Kong after the enactment of the national security law was I told I couldn’t wear this or that colour. I wore full yellow at a Hong Kong police station in October 2019 in reporting a crime.

I wore full yellow at the rallies not only in mourning of a cause now taboo in Hong Kong but out of an innate need for self-protection. As someone who has been openly gay since turning 12 in the 1990s and dropped out of school at 13 as a result of homophobic bullying and assaults that my teachers in Stanley endorsed and perpetuated, I have long found comfort in bright-coloured clothing in the same way a golden dart frog need not fear attacks from behind.

Nevertheless, talk of normalcy had me ponder the value of rights and freedoms among Hong Kong émigrés. LGBTQ people everywhere are accustomed to being called not normal, abnormal or less than human. That they need to stay quiet and invisible is why the closet is an enduring feature of society.

Singapore’s government announced last Sunday it would repeal Section 377A of the Penal Code that criminalised sexual activity between men. Singapore Prime Minister Lee Hsien Loong said Singapore “[needs] to find the right way to reconcile and accommodate both the traditional mores of our society and the aspiration of gay Singaporeans to be respected and accepted”. Social media lit up with messages of joy and solidarity. I couldn’t help feeling contempt.

Solidarity is meaningful only when it happens before the event, not after. Even a non-Singaporean such as me published peer-reviewed work on why and how sexual minority rights should be recognised as “shared values” of Singapore as early as 2009 when I was a doctoral candidate at the National University of Singapore. At the time, LGBTQ rights were considered at best a peripheral area and at worst “self-outing” in academia. In Singapore, they still are.

Solidarity is not about virtue-signalling social media posts on LGBTQ rights while uttering insidious jokes at LGBTQ people. It is not about wearing pink. Solidarity is about speaking up for our fellow humans in times of crisis and of joy.

Speaking up only when it is fashionable while remaining silent when it is not – especially when one holds a position of influence in society – is not speaking up at all. It is freeriding, it is cowardice and it is complicity.

The notion that gay men aspire to respect and acceptance entrenches discrimination against and marginalisation of LGBTQ people in society. No one with rights and dignity needs to harbour such an unnatural aspiration. The abnormality in homophobia stems from fear of human differences. It is the homophobe who is sick and needs treatment.

Not a day had passed after the Section 377A self-congratulations when Lee’s government announced it would amend Singapore’s constitution to prohibit same-sex marriage. No obfuscation, no pretence, no dissembling. The message was clear: aspire away, LGBTQ people, but your same-sex relationships are not normal. We heterosexuals tell you what normal is.

Like Hong Kong’s, Singapore’s non-recognition of same-sex relationships as equally valid under the law has ramifications for LGBTQ people in mundane but basic aspects of life. These include access to public housing, power of attorney and taxation arrangements, and parenting and adoption matters.

At the heart of the “shared values” discourse within Singapore and the “Asian values” debate transnationally, the fundamental question Singaporeans ought to ask is what kind of society they want their country to be in relation not just to sexual minority rights but to all aspects of governance. To live a life whose modes and meanings are dictated by others – however convenient or affluent such a life might be – is to forgo a true and meaningful life in which one’s own thoughts and actions have autonomous meanings.

As Thio Li-ann, a professor of law at the National University of Singapore, said in Singapore’s Parliament in October 2007 in her capacity as a Nominated Member of Parliament:

“I speak, at the risk of being burned at the stake by militant activists. But if we don’t stand for something, we will fall for anything. I was raised to believe in speaking out for what is right, good and true, no matter the cost. It is important in life not only to have a Brain, but a Spine.

“One of my favourite speeches by PM Lee, which I force my students to read, is his Harvard Club speech 2 years ago where he urged citizens not to be ‘passive bystanders’ in their own fate but to debate issues with reason and conviction. … Before government can govern man, man must be able to govern himself.”
Add Comment