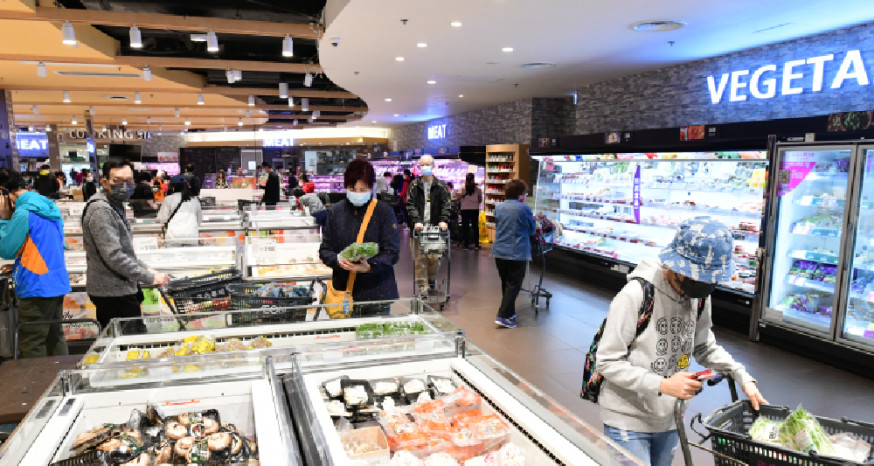 The city sees life slowly returning to normal after being hit by the fifth wave of the Covid-19 outbreak, with the bank HSBC and supermarket AEON announcing on Tuesday to gradually resume normal services.
Chinese University also announced it aims to fully resume services on campus on April 25, so that campus life can be restored as much as possible as Hong Kong transitions from its Covid-19 infection peak.

The Hongkong and Shanghai Banking Corporation said that in response to the local pandemic's latest situation, it will resume regular services in phases.

Starting from Friday, 48 HSBC branches currently operating on Mondays, Wednesdays, and Fridays will resume five-day operation, while operations on Saturday will remain suspended.

The three main branches in HSBC Building, Mong Kok and Kwun Tong, will maintain operations from Monday to Saturday, while another 29 will remain open on Tuesdays, Thursdays, and Saturdays until further notice.

In addition, the HSBC Business Centers in Central and Tsim Sha Tsui will reopen on Friday, increasing the number of operating Business Centers to seven, while the other four will remain closed until further notice.

HSBC said it will continue to monitor the situation and adjust its operational arrangements in a timely manner.

Supermarket AEON, which earlier changed its opening hours to 10am to 9pm, also announced lengthening the opening hours of its stores starting Friday.

Supermarket departments in Whampoa, Kornhill, Yau Tong, Tuen Mun, Lai Chi Kok, Tsuen Wan, and Tseung Kwan O will operate from 8.30am to 10pm, while other divisions of the stores will work from 10am to 10.30pm.

As for the two independent supermarkets in Mong Kok and Tsim Sha Tsui, the business hours will be adjusted from 10am to 11pm.

However, the supermarket did not mention when it would resume the Wednesday discount "Super Day." The discount day was suspended after crowds gathered at the height of the fifth wave of the outbreak to get bargains amid panic buying.

At CUHK, staff members may be arranged to work on rotation between onsite and work-from-home starting the coming Monday, with the aim of resuming services in full from April 25. All other academic arrangements, including examinations previously announced, remain unchanged.
#COVID-19  #Covid
Add Comment