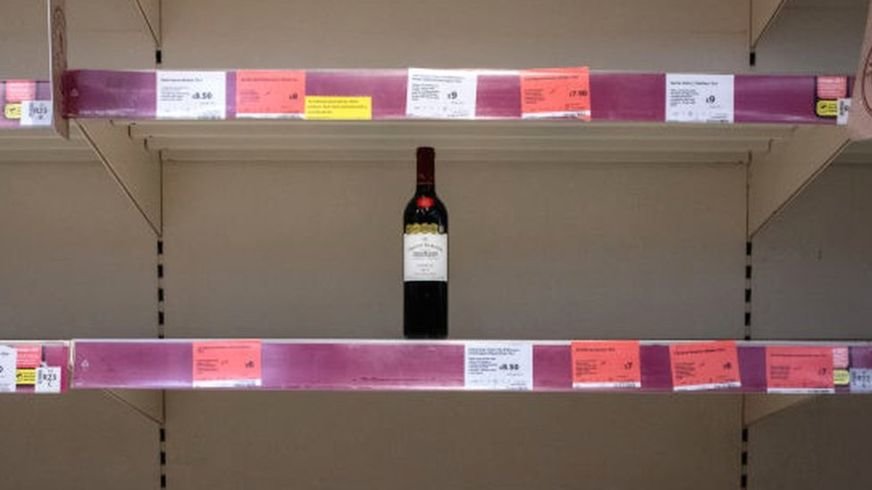 The coronavirus pandemic has meant that British people have been forced to stay in to try to contain its spread.

And many are buying more alcohol to drink at home as a result.

Alcohol sales in supermarkets and corner shops jumped by 22% in March, according to consumer analysts Kantar.

Growth in sales of alcoholic drinks outstripped that of food purchases, even as customers stockpiled goods such as pasta or rice in preparation for having to self-isolate.

English winemaker Chapel Down also recently toasted a surge in sales, due to the coronavirus-related lockdown.

It said that an increase in off-trade and online sales should compensate for losses seen because of the closure of pubs, bars and restaurants.

Elaine Hindal, chief executive of the charity Drinkaware, said that the rise in sales "isn't surprising", but cited concerns when it came to drinking during lockdown.

"Having alcohol available in homes, for many people, can be a source of temptation and lead to drinking without thinking," she said.

She added: "Small things can quickly turn into habits, like opening a bottle of wine in the afternoon when you normally wouldn't.

"It's important to remember that the more you drink, the more you increase your tolerance for alcohol, and over time, this can lead to dependency."

Other drinks businesses have said, however, that they expect sales to slide as pubs and bars remain shut.

Guinness and Smirnoff owner Diageo, for example, said on Thursday that containment measures were "having a significant impact" on its performance.

Meanwhile, the boss of pub chain Wetherspoons previously said that the company had "no money coming in through the tills" of its 850 UK pubs.

The hospitality sector, the third largest employer in the UK, faces a huge challenge as potential customers stay away.

In a bid to help those affected, Chancellor Rishi Sunak announced a year-long business rates "holiday" for all retail, leisure and hospitality firms.

Although online and off-trade sales might make up for some losses, some analysts have questioned whether that trend will continue.

Market research firm Mintel told the BBC that in its latest consumer survey, 20% of adults said they expected to spend less on alcohol over the next month.

Kiti Soininen, one of the firm's research directors, said: "While there was an early increase in retail sales of alcoholic drinks, this consumer mindset suggests that overall, the lockdown will hit the alcoholic drinks market."

She added: "A lot of that volume will just be completely lost from the market... [It] makes sense because food is a necessity, while alcohol is discretionary."

As disruption continues, some firms may be forced to shift their focus.

Its founder, James Watt, said that it had distributed 100,000 bottles made in its Aberdeenshire distillery to various charities.
Add Comment