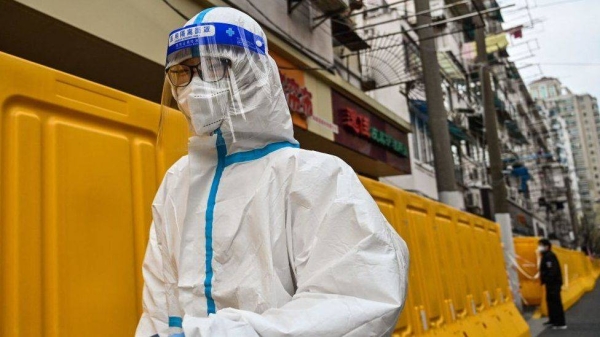 Shanghai officials will over the next few days further restrict access to food and hospitals in some parts of the city, the most severe phase of its extended lockdown yet.
Commercial food deliveries are not allowed and access to hospitals for all but emergencies must first be approved.

Neighbors of Covid-19 cases and others living close by are also being forced into government quarantine facilities.

Shanghai is now in its seventh week of city-wide restrictions.

Confirmed cases have fallen significantly from their peak, but authorities have not yet been able to hit the target of what they call "societal zero", where no cases are reported outside of quarantine facilities.

Despite the tougher measures, Shanghai officials insist that people living in half the city's districts are now free to leave their homes and walk around.

Official notices from local committees of the ruling Communist Party, seen by the BBC, detail several restrictions imposed under what officials call "silent periods" for the next three days.

These include only permitting government food deliveries, not allowing residents to "step out" of their front doors and requiring approval from the committee for anyone other than emergency cases to access hospitals.

The BBC is already aware of some cases where residents have had difficulties in getting emergency ambulances to come quickly, with some patients forced to use private cars to get to a hospital.

Authorities have also stepped up measures aimed at people who live close to positive cases, even if these close contacts test negative.

They are now sweeping up large groups of people in apartment buildings who live on the same floor or even just in the same building as those who've tested positive.

Footage has also emerged on social media showing extreme disinfection taking place inside homes where people have been removed after testing positive. Widespread use of industrial scale disinfection has been a key tactic used by authorities.

State censors have moved quickly to remove questions about the legality of the disinfection and also of the moving large numbers of people from their homes, despite testing negative.

In some cases, people who have been removed from their homes and taken into central quarantine have been told to leave a key to their home, usually in the door, so officials can come in and disinfect the space. Some legal figures have questioned if this move is "constitutional".

A constitutional law professor based in Shanghai had earlier posted an open letter online stating that forcing residents into quarantine centres required State Council approval or new laws passed by the legislature. His post was quickly taken down.

As concern over food supplies grow, city officials said they would remove anyone living in temporary accommodation on the streets or in vacant buildings, placing them into "closed loop management" - which means that employees have to live as well as work at their offices or factories.

This measure is likely to target app-based delivery drivers who are vital for maintaining the supply chain to almost 25 million people living here.

Many of these drivers currently live in temporary accommodation as they fear being locked down somewhere permanent and therefore being unable to do their job.

The tightened measures come just days after China's president Xi Jinping reiterated his commitment to the controversial "zero-Covid" strategy. In a paper published in the health journal The Lancet earlier this week, senior Chinese health officials said the lockdown would "buy time to vaccinate more people".

Their comments come after the head of the World Health Organisation called China's zero-Covid strategy unsustainable.

"When we talk about zero-Covid, we don't think that it's sustainable, considering the behaviour of the virus now and what we anticipate in the future," Dr Tedros Adhanom Ghebreyesus said on Tuesday at a news conference.

The clip was widely shared on Chinese social media before being blocked by censors.

More than two years after Covid-19 first emerged here official figures show around 90% of the population nationwide has been vaccinated. But only 38% of the more vulnerable - those over 60 - in Shanghai have the full protection of three vaccinations.
#COVID-19  #Covid
Add Comment