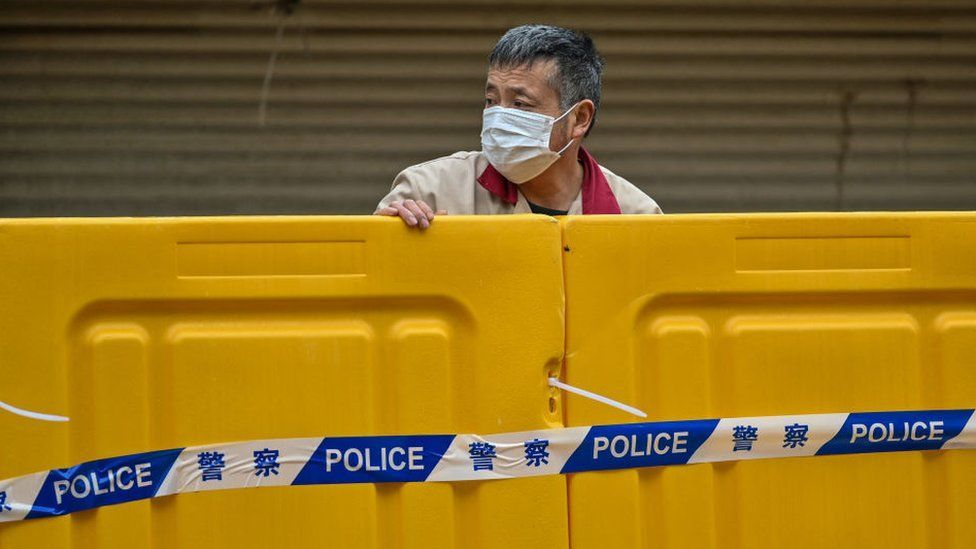 From Tesla's giga factory to a huge Disney resort, many multinational companies have their Chinese foothold in Shanghai. But in recent days the usually bustling financial centre has been stopped in its tracks after a spike in coronavirus cases.

With little notice, officials imposed a lockdown on the city's more than 26m residents. The restrictions, which started as a two-stage lockdown last week, have now been expanded to confine practically all residents to their homes.

The latest round of quarantining is China's largest since the coronavirus outbreak was first identified in Wuhan at the end of 2019.

This lockdown could turn out to be particularly costly for the world's second largest economy.

As well as being a major focus of the financial industry, Shanghai is a hub for semiconductor, electronics and car manufacturing. It is also the world's busiest shipping port.

Xu Tianchen, China economist for the Economist Intelligence Unit said short-term supply chain disruptions will have an impact on China's economy as a whole.

"There will also be ripple effects elsewhere because of the interconnectedness between Shanghai and other regions of China, especially the manufacturing hub of the Yangtze River Delta," he said.

On a more local level, the city known for its high-end storefronts like Gucci and Louis Vuitton has already seen consumer spending slump.

Lost business at retailers, hotels, and restaurants could directly cost Shanghai 3.7% of its annual Gross Domestic Product (GDP), according to Mr Xu.

GDP is a key measure of the health, or otherwise, of an economy.

The Chinese government has set a target for the country's GDP to grow by 5.5% this year. But some analysts have said it will struggle to meet that goal.

At the end of last week, data pointed to a slowdown in March for China's manufacturing and services sectors.

It came after the technology hub Shenzhen and Jilin in China's industrial north-east last month also faced lockdowns so that officials could conduct mass coronavirus testing and try to curb the spread of the highly transmissible Omnicron variant of Covid-19.

"We have seen PMI data, which shows that both manufacturing and services sectors are actually hit hard. And that has not included the Shanghai lockdown. So I think qualitatively we're seeing more downside pressure for the first and second quarters of GDP data," according to Peiqian Liu, China economist for NatWest Markets.

PMI data is a summary of market conditions gathered through surveying senior executives in key industries about their expectations for a number of factors including new orders, production and employment.

With the number of coronavirus cases rising, there could also be more trouble ahead if there are further lockdowns, especially for small business owners.

"The focus is much more on how employment is going to hold up in a prolonged lockdown or extended period of uncertainties of lockdown due to outbreaks.

While some companies in Shanghai have decided to close during the lockdown, others in industries like financial services and car manufacturing have implemented so-called "closed-loop" systems, according to Ms Liu.

Essentially, this means that employees have to live as well as work at their offices or factories.

"Imagine what happened in the Winter Olympics. It was also a closed-loop management, just to ensure that things within the bubble works operationally normal, and that they isolate people from outside or from the rest of China."

However, Mr Xu points out that it is not a strategy that can be sustained in the long-term.

"There's a concern that if lockdowns become prolonged and disruptions to the transportation to the supply chain persist, businesses will be unable to source supplies.

"So they are having an impact on road transport. The obvious risk is that Shanghai fails to eliminate the current outbreak quickly," he said.

Will Beijing stick to the plan?

Even as much of the rest of the world opens borders and eases restrictions, China still looks unlikely to shift away from its strict approach to the coronavirus.

"The policy has been a political source of legitimacy. The low levels of infections and deaths in China are often compared to other countries in the domestic media. As a result, the majority of the population within China still favour the zero-Covid policy, despite the increasing economic costs," Mr Xu said.

But Ms Liu believes there is a possible silver lining as Beijing has pledged to support the economy to meet its ambitious growth target.

"The government has been responsive with a set of easing policies from both fiscal and monetary front.

"That will hopefully stabilise the domestic growth momentum for this for the time being, and to ensure China's smooth running of the supply chain to minimise the global interruption of supply chain at this short term," she said.