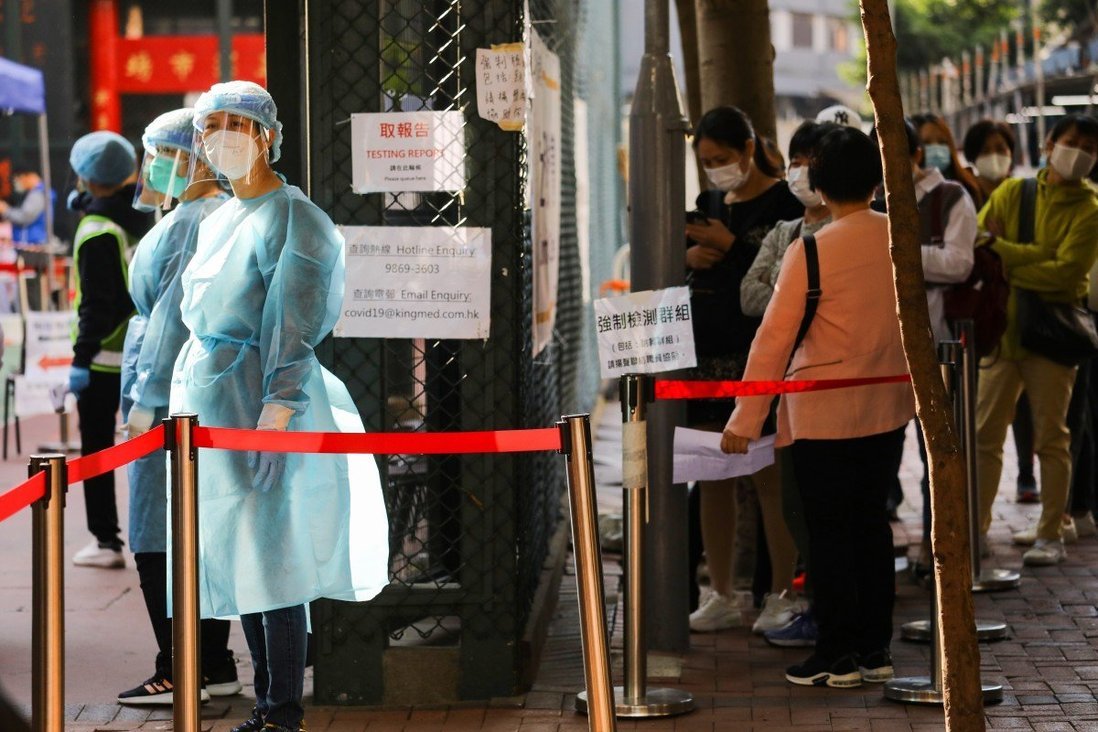 Health officials expect to get 10,000 hotel rooms by the Friday deadline, a source says. The scheme is likely to be launched in mid-December.
Hong Kong confirmed 90 new coronavirus infections on Thursday, as worried health officials warned that the sources of about a third of the cases were untraceable, the highest number in 3½ months.

Fears of Covid-19 spreading in a public hospital also rose after a patient who was admitted almost three weeks ago tested preliminary-positive when she was about to be discharged.

With an influx of Hongkongers anticipated before Christmas, several hotels had signed up to be designated quarantine venues for overseas arrivals, a source said, adding health officials expected to get 10,000 rooms by the Friday deadline.

The designated hotel scheme is likely to be launched in mid-December. Thirty-one of the latest local infections could not be traced, while 11 were imported and involved arrivals from Indonesia, the Philippines, Nepal, Russia, Pakistan, Japan and France.

The number of cases of unknown origin was the highest since August 13, when 33 were reported. More than 60 preliminary-positive infections were also recorded.

“There are 31 unlinked local cases among the total number of 90 cases, so the situation is worrying because we cannot find any identifiable risk factors among these patients,” said Dr Chuang Shuk-kwan, head of the communicable disease branch of the Centre for Health Protection.

“There are silent carriers in the community and they might have infected other patients.”

Twenty-one of the new infections were linked to a “super-spreader” dance venue cluster, taking the number of cases in the group to 590.

Chuang warned that while the number of new daily infections related to the cluster appeared to be dropping, the infections had “infiltrated all corners of society” because those involved attended a range of social activities.

Dr Lau Ka-hin, chief manager of quality and standards at the Hospital Authority, said an 82-year-old woman who was first admitted to Princess Margaret Hospital in Kwai Chung on November 14 had tested preliminary-positive for the virus.

On admission, she had a fever but tested negative for the coronavirus. The woman spent two nights in an isolation ward before she was transferred to a general ward as her condition improved.

She tested preliminary-positive when her discharge was being arranged on Wednesday.

Thirty-three patients who shared a ward with her and 10 medical workers who attended to her without wearing proper protective gear are considered close contacts.

Among the patients, 14 had already been discharged and four died of other illnesses. The other 15 who were still in hospital tested negative for Covid-19.

Lau said the patient already had antibodies for the virus so the chance of her infecting others was not high. He said his colleagues were tracing the source of infection in the woman, who lived in Kwai Shing East Rhenish Care and Attention Home. Ninety staff and 150 residents of the care home would be tested for Covid-19.

Among the new infections were five people linked to a construction site in the Lohas Park residential estate in Tseung Kwan O, a taxi driver, a schoolteacher and a worker in the sushi section of Superior Manya Japanese Restaurant in Mong Kok.

The health authorities believed the sushi worker infected a family member: a cross-border truck driver who was confirmed earlier this week.

A female police communications officer, 37, at the New Territories Regional Command and Control Centre also tested positive for the virus on Thursday. Her last day of work was Monday. She felt sick on Tuesday and sought medical treatment. Possible close contacts in the force would work from home and the workplace was disinfected thoroughly.

With many residents expected to return home from Europe, the United States and elsewhere for Christmas, public hospitals would reduce non-emergency services to free up manpower, the authority said.

All overseas arrivals would need to quarantine in designated hotels. Participating hotels would set the room rate rather than it being a standard fee, the source said.

The government will provide a subsidy for the operator if the occupancy rate is below 50 per cent. The amount will be 70 per cent of the room rate, capped at HK$600 (US$77) per room.

Tsui said government departments would step up law enforcement of measures such as a ban on gatherings of more than two people, while increasing the financial penalty.

The minister also said the government had been looking to facilitate travel bubbles based on artistic and sports activities next year, for instance, allowing overseas performers and athletes to enter Hong Kong without the two-week quarantine. But rules would be strict to ensure they got tested and would not enter the community to reduce the risk of transmission.

Separately, Secretary for Labour and Welfare Law Chi-kwong revealed there had been only two applications so far for a new government scheme to offer a HK$5,000 subsidy to infected local workers not entitled to paid sick leave. One application was approved, while the other was pending, he said.
#COVID-19  #Covid  #Coronavirus
Add Comment