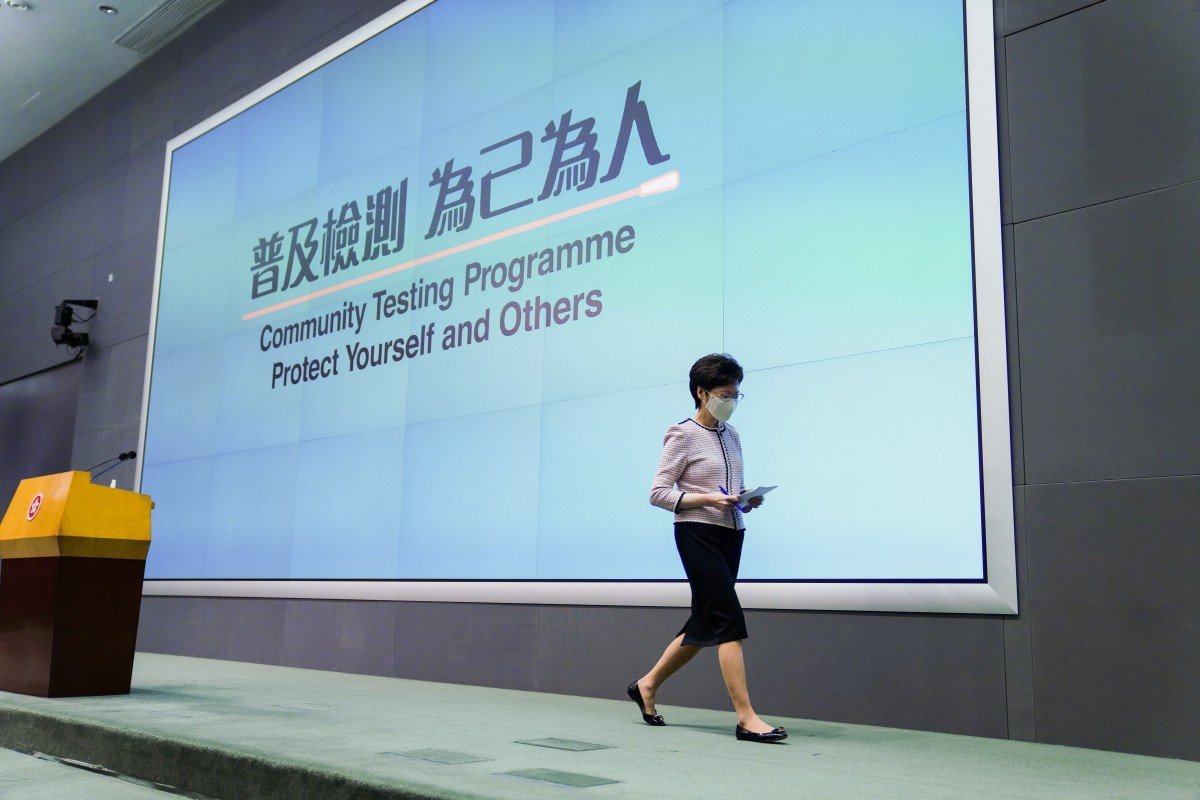 Criticism of government officials alone not enough to warrant sedition charges, Lam says, while adding the age of the colonial-era law was irrelevant.

Hong Kong’s embattled leader has defended the arrest of an opposition activist with a seldom-used, colonial-era sedition law, saying it had “nothing to do with” freedom of speech and that criticising the government would not fall foul of the offence.

She spoke just hours before Tam became the first person to be charged with sedition since the city’s return to Chinese rule in 1997. He was charged with five counts of uttering seditious words and another count of acting disorderly in public places, then taken to Fanling Magistrates’ Courts for an afternoon hearing, after spending more than 48 hours in police custody.

The arrest has raised concerns from legal experts, who said the use of the sedition charge – codified in 1938 under the Sedition Ordinance and incorporated into the city’s Crimes Ordinance in 1971 – represented a threat to Hong Kong’s freedom of speech, as it did not have the precision or human rights protections found in modern laws.

Speaking to the press ahead of a weekly meeting of the Executive Council, Lam was asked why the police would use a colonial-era law and if it put the city’s freedom of expression in jeopardy.

“There isn’t a distinction over the age of a law, so to speak, whether a law is pre-1997 or post 1997,” she said, referring to the year Hong Kong was returned from British to Chinese sovereignty.

“If there is evidence that someone has breached the law, then law enforcement authorities have to take action. It has nothing to do with freedom of speech,” she said.

Senior Superintendent Li Kwai-wah on Sunday said Tam, a leading figure in the localist group, “used words that stirred up hatred and contempt for the government” and incited discontent among Hongkongers when he handed out face masks and criticised officials at street booths set up across the city between June and August.

But Lam sought to reassure the public that criticising the chief executive and other officials was not illegal, as freedom of speech was guaranteed under the city’s laws.

Citing a Chinese idiom, Lam said: “Criticisms against the Hong Kong government, the chief executive and individual officials are ‘numerous as are the sands of the Ganges’. How can we say this will breach the corresponding ordinances?”

She said freedom could only be limited when necessary to safeguard national security, ensure public order or public health, or to protect the rights or reputations of individuals, instances allowed under the Hong Kong Bills of Rights Ordinance and the International Covenant on Civil and Political Rights. 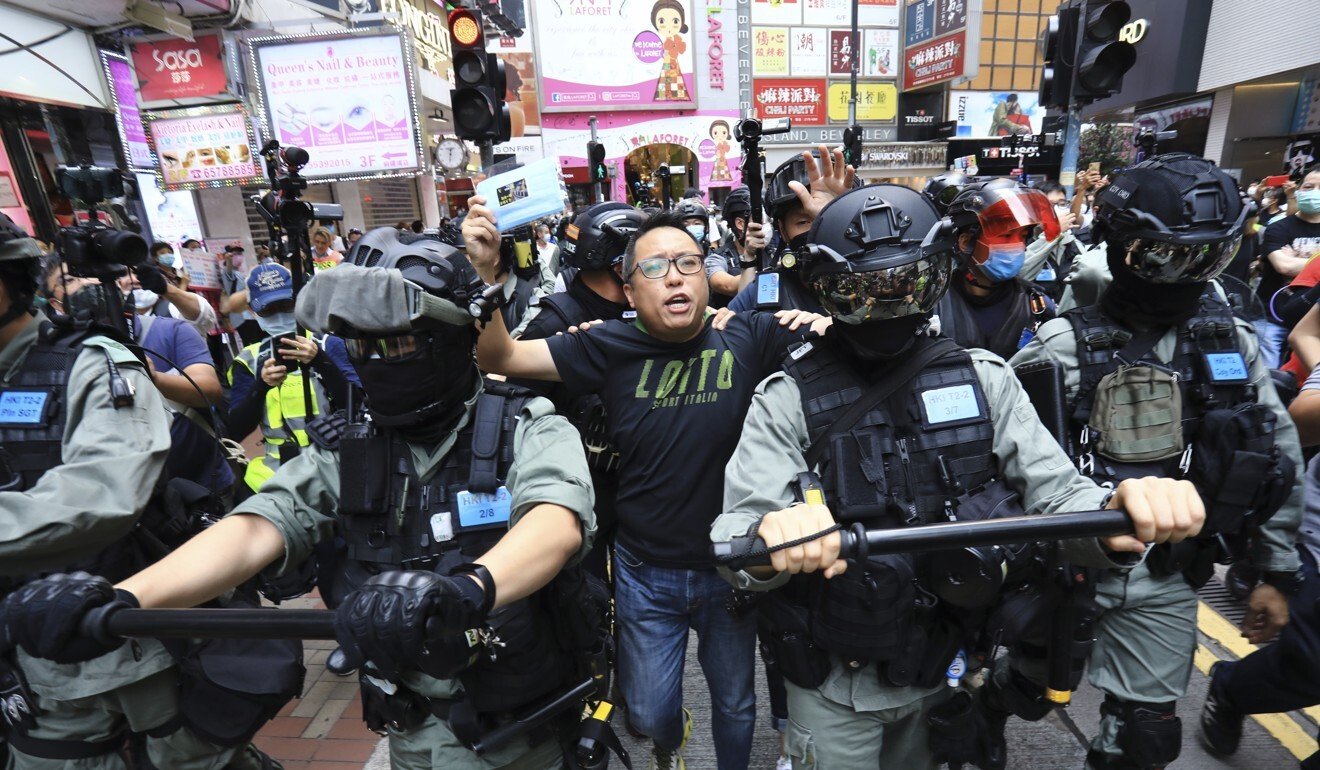 Activist Tam Tak-chi (centre), pictured during his May arrest at a national anthem law protest, was arrested again on Sunday over alleged seditious speech.

Under Section 10 of the city’s Crimes Ordinance, anyone who commits acts with seditious intent or utters seditious words can be fined HK$5,000 (US$645) and jailed for two years on their first offence.

Tam’s arrest was made hours before a rally in Kowloon against the national security law, in which a 12-year-old girl who said she was at the scene to buy art supplies was tackled by police.

Asked if police overreacted on Sunday, Lam said she would not “give an opinion on the actual operation on the ground” but believed every complaint regarding actions taken by law enforcement agencies would be fully investigated.

On the recent detainment of 12 Hongkongers in Shenzhen after their interception by Guangdong coastguard officers while suspected to be en route to Taiwan, Lam said it was not a question of simply having them returned to the city, as the mainland legal procedures had yet to be completed.

Lam said the families of the arrested had been notified, and that the government’s economic and trade office in Guangzhou would liaise with authorities and explore help Hong Kong could render.

She also said the debate that had raged over the term “separation of powers” since the decision to remove it from liberal studies textbooks had clarified the “truth”, which was that the city had an executive-led constitutional system with the chief executive accountable to the central government in Beijing.

“For some reason, some people have malicious intentions and like to stir social conflict using this topic. Some others just don’t have a deep understanding,” she said, citing poor education as the reason for what she saw as misunderstandings of the city’s constitutional system.

On September 1, Lam defended the decision to remove the phrase, saying Hong Kong never had separation of powers, though there was a system of checks and balances between the government’s executive, legislative and judicial institutions.