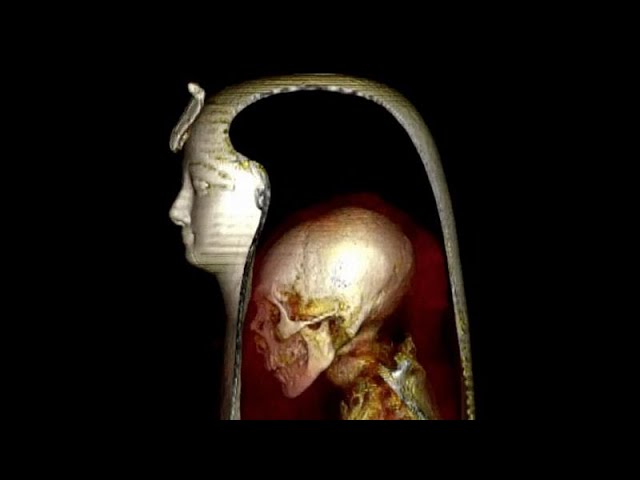 Scientists uncover what was hidden under a mummy's wrappings for over three thousand years using X-rays, CT scans and 2D and 3D softwares.

The mummy of an Egyptian pharaoh has given up some of its secrets at last.

Using state-of-the-art technology, scientists have been able to uncover what has been hidden under the mummy's wrappings and mask for over three thousand years.

The remains of Pharaoh Amenhotep I, who ruled Egypt approximately between 1525-1504 BC, were discovered in 1881 in Deir Al Bahari in southern Egypt.

Hawass said the findings are a "major important discovery" and it shows for the first time "that technology can make discoveries without disturbing the mummy".

"It is a very informative, safe way to reveal information from the mummies without destroying them or without harming them," said Saleem in an interview with Euronews.

Unwrapping a mummy would expose it to our environment and potentially destroy it, Saleem explained, making the use of advanced technologies imperative.

"Once the wrapped mummy is disturbed by unwrapping, it has the potential to be harmed because it had this environment inside the wrapping for millennia," she added.

The technique allowed them to respect this "very important heritage," she said.

"He is also a human being, he was a king, and the respect of a mummy as a person is very important ethically in our science," Saleem added.

Using the thousands of images taken by the X-ray and CT scans, Saleem was able to process them using software to create 2D and 3D models, which enabled the team to digitally remove the mask and all the layers around the king’s remains and finally look at his face.

"It was an amazing moment to look at the face of the king and see that he has an oval face with a narrow chin and even a little bit of an overbite," said Saleem.

The non-invasive research enabled the scientists to learn that the Pharaoh died aged 35, that he was "a healthy man and had beautiful good teeth".

They also discovered that the king was wearing 30 amulets between the wrappings and inside the body, as well as a belt covered with golden beads.

The team also learned that the king was the first ruler from ancient Egypt to use the royal mummification style and be embalmed with his forearms crossed in the so-called Osiris position, which was then followed by other kings.

So far the team has carried out CT scans on 40 royal mummies and plans to continue the work on other royal mummies as well as common people from the period.