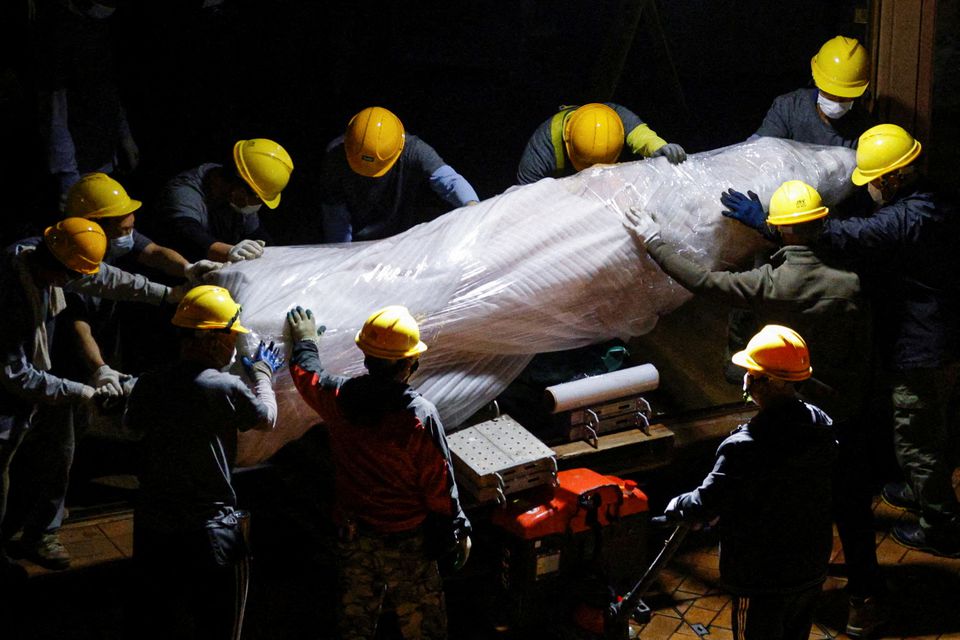 The sculptor of a statue commemorating the victims of China's 1989 Tiananmen Square crackdown said on Friday that its removal from a Hong Kong university was "brutal," but any damage would be symbolic of recent changes in the city under Chinese rule.
The eight-meter sculpture of anguished human torsos was one of the few remaining public memorials in the former British colony to remember the crackdown on pro-democracy protesters -- a taboo topic in mainland China, where it cannot be publicly commemorated.

The University of Hong Kong on Wednesday dismantled and removed the two-ton copper artwork, known as Pillar of Shame, from the campus where it has been for more than two decades, citing legal and other concerns.

"Of course, I could repair everything, but maybe it would be nice to have some damage on it," Danish sculptor Jens Galschiot told Reuters in an interview.

"It sounds strange, but it is also a symbol. This is what they're doing to ... Hong Kong."

The university could not be reached for comment late on Friday.

The statue was already seen by democracy activists as a key symbol of the wide-ranging freedoms promised to Hong Kong at its 1997 return to Chinese rule, which differentiated the global financial hub from the rest of China.

The city has traditionally held the largest annual vigils in the world to commemorate the Tiananmen Square crackdown. But it has taken an authoritarian turn after China imposed a sweeping national security law in 2020 in response to prolonged and often-violent pro-democracy protests the year before.

Loud noises from power tools and chains rose from a closed off area for hours on Wednesday night before workers were seen carrying out separate parts of the statue and winching them up on a crane towards a waiting shipping container. HKU said on Thursday it had put them in storage.

"It is brutal to move it the way they did," Galschiot said. "Nobody would accept it. Nobody should do that kind of thing. It's really unfair."

Communist Party rulers in Beijing have never provided a full account of the 1989 violence in and around Tiananmen Square. Officials gave a death toll of about 300, but rights groups and witnesses say thousands may have been killed.