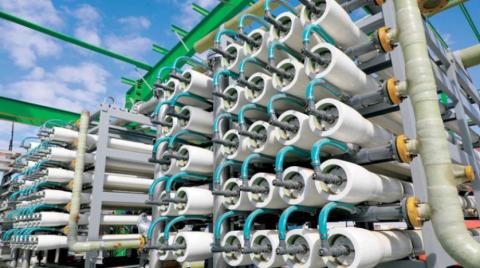 Saudi Arabia and Japan are working on a joint project to build an integrated reverse osmosis membrane desalination plant.
During a press conference in Riyadh on Saturday the Saline Water Conversion Corporation signed a contract to establish the first plant in the Middle East and the second of its kind outside Japan the Saudi Press Agency reported.

The event was held under the patronage of Eng. Abdul Rahman Al-Fadhli, Minister of Environment, Water and Agriculture.

The construction of the plant will take place entirely within in the Kingdom, carried out by a Saudi-Japanese team in partnership with the Local Content and Government Procurement Authority, and the Government Expenditure and Projects Efficiency Authority.

The project aims to enhance the Kingdom’s leadership potential and to adopt and maximize the use of its engineering capabilities in the desalination industry, by providing innovative solutions that make water sources sustainable, environmentally friendly, and highly energy efficient.

The factory will be established and implemented according to the highest standards and the latest technologies in this field.

The project also seeks to cover the high and increasing demand for the promising industry at the local and global levels, with the volume of demand estimated at 690 million riyals ($184 million) in Saudi Arabia by 2025, in addition to reducing the cost rate by about 14 percent and energy consumption by 4 percent.

Eng. Abdullah Al-Abdul Karim, Governor of SWCC, stressed that the localization of promising industries in the field of saline water desalination was an extension of the comprehensive national economic development, in accordance with Vision 2030 and the objectives of the national strategy for industry.

He added that the environment-friendly reverse osmosis membranes industry was one of the most important options for the desalination industry in the world, adding that the demand for this technology was increasing at an annual rate of 6 percent locally and 7 percent in the Gulf.

“These industries will soon create abundant and attractive investment opportunities that support local content, with local production inputs exceeding 70 percent. It is expected that the export percentage of the entire production of the membrane factory will exceed 30 percent, which reinforces the country’s position as a vital base for leading industries with its promising opportunities and markets,” he underlined.

The SWCC is working to localize the desalination industry as part of efforts to promote and empower local employment initiatives through the creation of new industries.
Add Comment