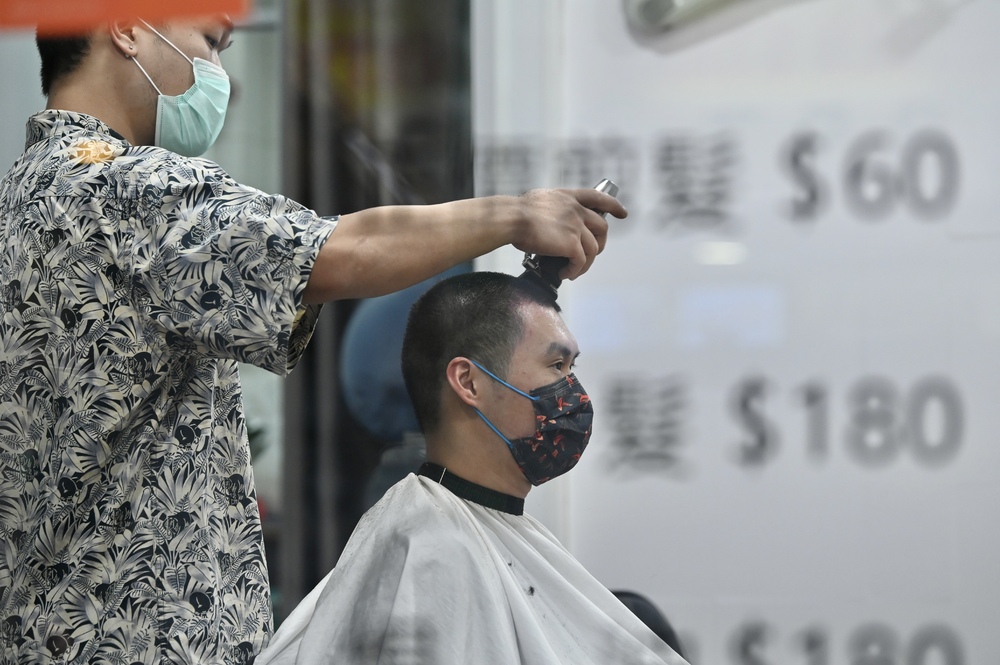 Hair salons have seen overwhelming bookings as they reopen on Thursday but barbers are worried they suffer from manpower shortage at the beginning.
A hair stylist association chairman said industry workers may have changed fields since the closure of barber shops from February 10 followed by Chief Executive Carrie Lam Cheng Yuet-ngor’s announcement that they will remain closed until April 20.

But authorities on Tuesday U-turned and allowed them to reopen with the no jab no entry vaccine pass today, adding the decision came after considering people’s needs.

“Previously authorities said we will be closed until April 20, which means some of us will have no income for two months and some of us have decided to changed fields,” he said.

“But now we have to re-organize things and ask people to come back to work within short notice. I worry there is not enough manpower in the beginning,” he said.

From Thursday, customers at hair salons must have received one vaccine dose and use the LeaveHomeSafe app upon entrance.

Kong said the requirements are easy to meet but after the abrupt closure last month, industry workers are worried authorities could tighten measures all of a sudden and order them to close again if infections take a turn for the worse.

“Hair salons provide necessary services and in fact, we have seen few cases involving barber shops,” he said, adding authorities should consider removing the shops from the list of regulated premises.

At a hair salon in Tsim Sha Tsui, the owner, Lee, told The Standard that a dozen of customers have made appointments for Thursday and several dozens more for the weekend.

“Most of them were men who said they need a haircut desperately. Of course some frequent female customers have also made their bookings for regular hair treatments,” he said.

“Some customers who dye silver hair on a monthly basis also called us immediately after hearing the news.”

Although the shop only reopens on Thursday, Lee and his employees returned to the office today already for a thorough disinfection. They also put up LeaveHomeSafe QR code on posters at the entrance and inside the salon.

One of the hair stylist at his shop, Lo, said she has rented a residential flat in a tenement building in Tsim Sha Tsui for two months from last week as a temporary one-man barber shop and the U-turn in reopening salons frustrated her.

“I’ve already signed the rental contract for two months, but of course now that they reopen salons it’s better for me to work here, where we have all the machines, tools and equipment,” she said.

She said she hoped authorities can be consistent in policy-making and “stop changing their minds without any signs.”

“The government needs to understand that we are not machines. You can’t just close our shops all of a sudden on this day and ask us to reopen on another day,” she said.

But another hair stylist, surnamed Chan, said she is delighted to hear the news because she had been carrying her tools around in a suitcase to customers’ home for simple haircuts and dyes.

“For the past month I carried this suitcase across Hong Kong to serve my frequent customers. But it’s a challenging job coz it’s very time-consuming with the commutes and I often had to take taxi between jobs,” she said.
#vaccine
Add Comment