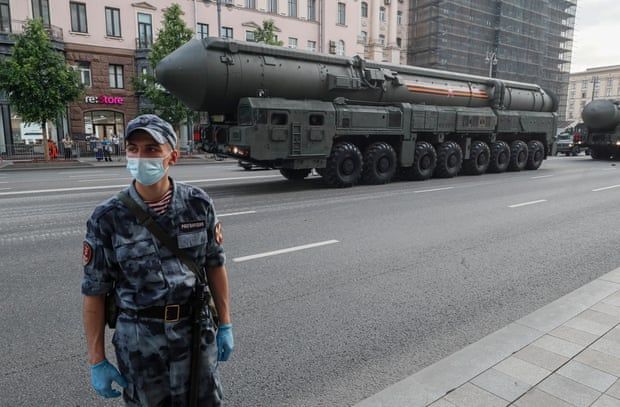 Russia suspends US inspections of its nuclear weapons arsenal

Russia has suspended an arrangement that allowed US and Russian inspectors to visit each other’s nuclear weapons sites under the 2010 New Start treaty, in a new blow to arms control.

Mutual inspections had been suspended as a health precaution since the start of the Covid pandemic, but a foreign ministry statement on Monday added another reason Russia is unwilling to restart them. It argued that US sanctions imposed because of the invasion of Ukraine stopped Russian inspectors travelling to the US.

“There are no similar obstacles to the arrival of American inspectors in Russia,” the statement said. “The Russian foreign ministry raised this issue with the relevant countries, but did not receive an answer.”

The US state department did not immediately respond to the claim that the sanctions created an imbalance when it came to nuclear weapons inspections. A spokesperson said: “The United States is committed to implementation of the New Start Treaty, but we keep discussions between the parties concerning treaty implementation confidential.”

The treaty, which limits each country’s deployed strategic warheads to 1,550, and imposes limits on delivery systems, was extended for five years in February 2021. It is the last remaining arms control treaty in effect between the US and Russia, and its inspection and verification clauses are widely seen as vital in building mutual confidence and preventing nuclear miscalculation.

“At a time when US and Russian relations are tense, anything that undermines stability and nuclear predictability is a concern,” said Jon Wolfsthal, who was senior director for arms control and nonproliferation in the Obama administration’s national security council.

“However, we continue to exchange large volumes of information with Russia about their nuclear weapons. The hope is that this is just a political road bump and not a major new obstacle to stability.”

While inspections have stalled, Russian nuclear forces have maintained another key part of the New Start agreement, notifications to the US on any movements or changes in status of its nuclear arsenal.

“Notifications come in to something called the National and Nuclear Risk Reduction Centre, which is a centre headquartered in the department of state. They told me one day in May they got 18 notifications. They’ve never seen that number of notifications before,” Gottemoeller, now a lecturer at Stanford University, added. “So it seems like the Russians, at least the Russian nuclear forces, have been intent on trying to continue implementation for mutual predictability and confidence.”

Inspections are important way of checking whether a country’s notifications on its nuclear weapons are accurate, but Pavel Podvig, a Geneva-based independent analyst on Russian nuclear forces, said they are not the only one.

“First, the volume of notifications is sufficiently large so you should be able to detect serious discrepancies,” Podvig, who is also a senior researcher at the UN Institute for Disarmament Research, said. “Then, there are always national technical means – they cannot see everything, of course, but serious discrepancies will be detected … So, I wouldn’t say that all is lost for arms control, even though, of course, it’s a rather unfortunate decision on Russia’s part.”