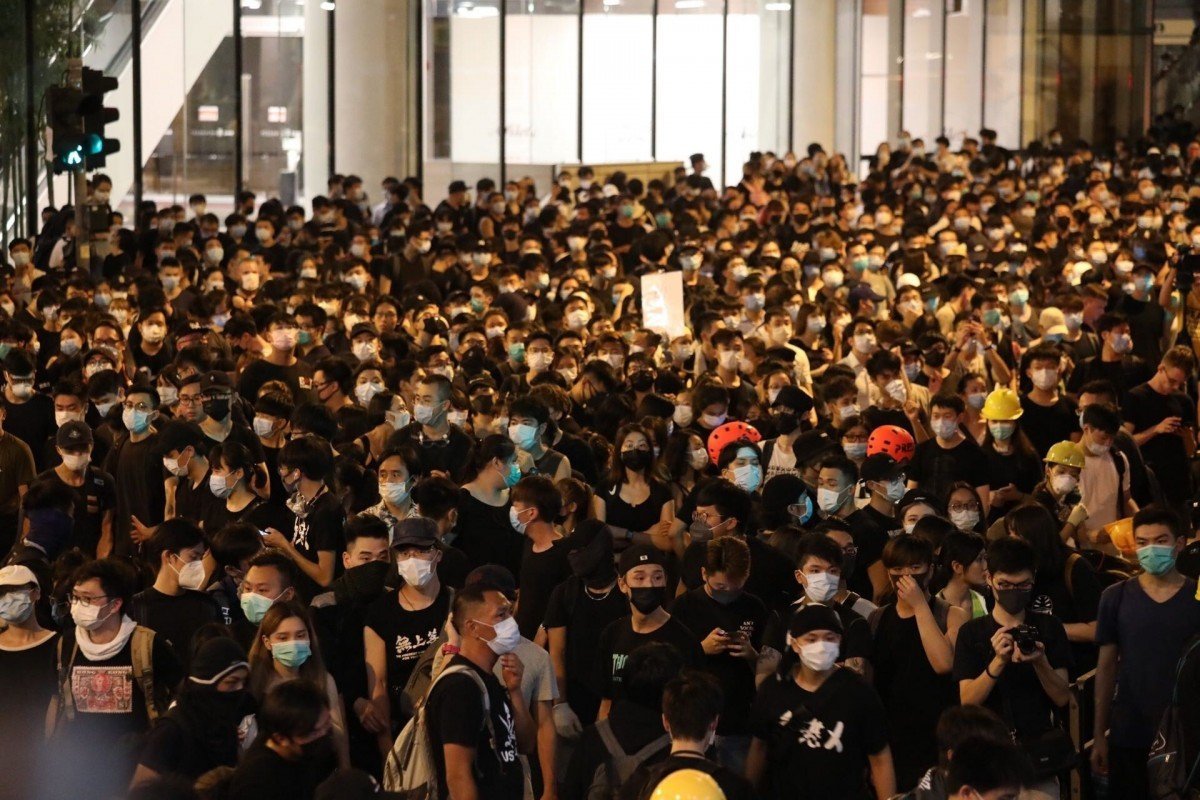 A construction worker has been jailed for four years for rioting and assaulting a constable during a protester siege of Hong Kong police headquarters
last year, with the judge calling the demonstration “an apparent attack on the rule of law”.

The District Court last week convicted Shum Hiu-lun, 26, of rioting and common assault during the protest outside the Wan Chai facility on the night of June 26, 2019. He is the first person to be convicted of rioting during last year’s anti-government unrest
following a court trial.

He also pleaded guilty to a separate count of failing to surrender to custody without reasonable cause for not appearing in court as scheduled last November.

During his trial, the court heard that Shum was among a thousand protesters who surrounded police headquarters, pelted the building with eggs and sprayed graffiti on its walls with “very provocative and insulting” slogans.

Shum was said to have punched and kicked plain-clothes officer Cheung Kam-fuk, who was pursued by a group of protesters that night as he tried to find a way inside the building.

On Friday, District Judge Anthony Kwok Kai-on said the illegal assembly had posed an imminent risk to public safety, as it caused serious disruption to police operations and traffic in the vicinity.

"Even though the defendant did not commit the crime out of personal gain, once he resorted to violence, he must pay the price District Judge Anthony Kwok"

Kwok also noted that the siege was unnecessary, as many of the protesters who took part had already voiced their discontent with the now-withdrawn extradition bill at a peaceful rally earlier that day.

“The police force is Hong Kong’s major law enforcement agency. Surrounding its headquarters is apparently an attack on the rule of law. The court must condemn such an act,” the judge said, adding that the court would not take into account the political background of the case in sentencing.

Kwok found the riot less serious than the Mong Kok riots of 2016, something he said was reflected in its spontaneity and lack of injuries. However, he stressed that the court must impose a deterrent sentence in cases that stemmed from violence.

“Even though the defendant did not commit the crime out of personal gain, once he resorted to violence, he must pay the price,” Kwok said in his sentencing remarks. “Violence is violence. This fact will not be altered by any noble, personal aspirations.”

Shum was arrested at his home on July 28 last year over the rioting allegations. He was held for a second time on November 27, six days after he skipped his pre-trial hearing at Eastern Court.

Police believed Shum planned to abscond to Taiwan before his second arrest, after seizing NTD$38,000 (HK$10,000) in his possession.

Shum is the fifth defendant to be sentenced over rioting charges stemming from last year’s social unrest. Four others were each jailed for between 40 and 48 months after pleading guilty to the same charge before their cases went to trial.