Human Rights Watch found that Chinese students in Australia are self-censoring to avoid harassment. They also found teachers are changing their material to avoid criticism from the government of mainland China.

Many Chinese students at Australian universities have created an environment of self-censorship, a rights group says.

Human Rights Watch is an international non-governmental organization that works for human rights. It said teachers are avoiding criticism of the Chinese government. And Chinese students are staying quiet in fear of harassment.

In a report released on Wednesday, the group said some parents in mainland China had been questioned by Chinese police about the activities of students in Australia. And Hong Kong police had questioned a returning student about pro-democracy activities.

The group said self-censorship has worsened. It notes that universities have used online classes using internet video services during the COVID-19 pandemic. Chinese students are joining classes from behind China’s “Great Firewall,” a system of internet censorship.

The report’s writer Sophie McNeil told Reuters this change limited the academic freedom of all students.

McNeil said, in one example, an online class removed material about the protests in Tiananmen Square which resulted in the deadly attack on student protestors by the military in 1989.

Universities Australia is a non-profit group that supports higher education in that country. It said universities believe in academic freedom. It advised any students or employees to go straight to their university if they are being repressed or threatened.

He said in a statement that any interference with Australian universities by foreign groups cannot be accepted.

The Chinese embassy in Australia answered the report. It said Human Rights Watch has become a political tool for the West to attack developing countries. It said, “It is always biased on China.” 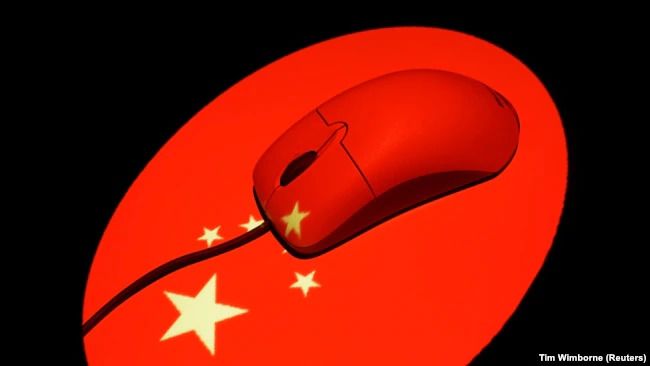 A computer mouse with a Chinese flag in this photo illustation. Oct. 1, 2013

Human Rights Watch spoke to 24 students with “pro-democracy” opinions attending Australian universities. Eleven of the students were from mainland China and 13 were from Hong Kong. The group also spoke to 22 academic employees.

The rights group found three cases in which students’ families in China had been warned by police over a student’s activity in Australia.

A student not identified in the report told Human Rights watch, “If you protest against CCP abroad, they will find people you love to make you pay. Even if you are in Australia.” CCP is the Chinese Communist Party.

The student said he posted “anti-government” material on the social media website Twitter. He said Chinese police had warned his parents last year.

A student from Hong Kong made a report with Australian police after four men with face coverings and speaking Mandarin appeared outside his house. They chased him with sticks after he spoke at a democracy event.

The student slept in his car then moved to a new house after the incident.

The report found threats by Chinese classmates loyal to the government were more common. These included threats to expose personal information online, known as doxing, and threats to report a student’s opinions to the embassy.

Human Rights Watch said more than half of students who experience threats did not report it to their universities.

McNeil said, “They believed their universities cared more about maintaining relationships with the Chinese government and not alienating the students who were supportive of the CCP.”

The report said half of the academic employees that Human Rights Watch spoke to said they self-censored in the classroom.

McNeil said many academics “avoided discussing China in the classroom.”