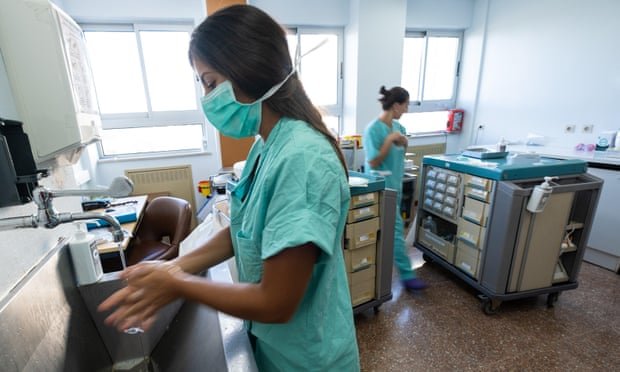 Suggested bill would also give police power to detain people suspected of having coronavirus
Retired or not fully qualified nurses and other medical staff could be called in to help tackle the coronavirus pandemic, and given protection against any negligence claims, among a sweeping range of measures planned under emergency legislation.

Another possible power would allow police or immigration officers to detain a person for a limited but unspecified period if they might be infectious “and to take them to a suitable place to enable screening and assessment”.

The laws, expected to be introduced to the Commons on Thursday, will also give ministers the power to ban gatherings or events and temporarily close schools and colleges in the effort to curb the spread the virus.

An outline of the planned new laws, released on Tuesday evening, says the measures will be time-limited to two years and will not all come into force immediately, allowing the UK and devolved governments to “switch on these new powers when they are needed”.

It adds: “The measures in the coronavirus bill are temporary, proportionate to the threat we face, will only be used when strictly necessary and be in place for as long as required to respond to the situation.”

A key change would be to allow medical regulators to create emergency registrations for “suitable people” to become nurses, midwives or paramedics, such as those who have recently retired and students near the end of their training. The document does not mention doctors in relation to this.

They would be given “indemnity for clinical negligence liabilities arising from NHS activities” linked to the coronavirus outbreak, where none was in place.

Measures to encourage returnees would include suspending a rule that stops some NHS staff who return after retirement from working more than 16 hours per week, ensuring they do not lose out under pensions.

Other measures are intended to help ease pressures on NHS staff, such as changing mental health legislation so people seen as being a risk to themselves or others can be forced to have treatment on the opinion of just one doctor, not two.

Time limits as to when such people must be allowed to leave will also be extended or removed as needed.

Also, the obligation on some councils in England and Wales to provide certain statutory social care services could be eased “to ensure the most urgent and serious care needs are met, even if this means not meeting everyone’s assessed needs in full or delaying some assessments”.

While government guidance on avoiding pubs, bars and other crowded places is now voluntary, the new laws will allow the government “to restrict or prohibit events and gatherings during the pandemic in any place”, and to temporarily close educational establishments and childcare providers.

Another possible power would allow ministers to close ports or airports if too many Border Force staff are off sick. Others will expand the use of video and audio links in court proceedings.

A notably gloomy section is connected to the expectation of a rise in deaths, with one allowing a greater range of people, among them funeral directors, to register a death for the family.

A final part gives the power to extend statutory sick pay to all days off work, as promised by ministers.

Matt Hancock, the health secretary, said any new measures “will only be used when it is absolutely necessary and must be timed to maximise their effectiveness, but crucially they give the government the powers it needs to protect lives”.

He added: “By planning for the worst and working for the best we will get through this, but this is a national effort and we must all work together ‒ from businesses prioritising the welfare of their employees, to people thoroughly washing their hands.”
#COVID-19  #Covid  #Coronavirus
Add Comment