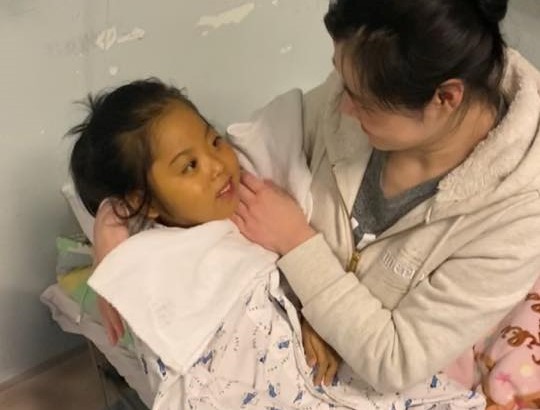 Respects pour in over passing of girl diagnosed with biliary atresia

Respects poured in after a five-year-old girl named Yu-yan lost her battle with congenital biliary atresia and passed away peacefully in her mother's arms on Wednesday night.
Biliary atresia is a disease where the tubes that carry bile produced by the liver to the gallbladder are blocked, leading to liver damage and cirrhosis.

Yu-yan's family announced the sad news on Facebook Thursday afternoon, saying the girl's liver condition had worsened over the past month.

Last week, Yu-yan also had her lips stitched over profound bleeding and had a high-degree fever in the days following. Her liver later failed, and she suffered internal bleeding in her stomach, waking her up from her sleep despite morphine injections.

Her family added that Yu-yan had been in a vegetative state over the last few days with her eyes fixated, but suddenly could look at her mother and respond to sounds as her senses returned in her final hours.

The mother put Yu-yan into new clothes at dusk, while other family members kissed the girl goodbye as her heart stopped beating.

Yu-yan had been in the hospital for most of her life. She underwent liver surgery when she was only two months old and her second surgery in Queen Mary Hospital just a day before her first birthday.

Her life completely changed as she was sent to a general ward instead of the intensive care unit, where her heart stopped beating, and her brain was damaged from the lack of oxygen without prompt medical attention.

Still, the family expressed gratitude to the doctors and nurses who have been taking care of Yu-yan for more than four years, as well as the public for their words of support.

They also thanked God for allowing them to keep Yu-yan company in her last moments and for her peaceful and painless passing.
#Facebook
Add Comment