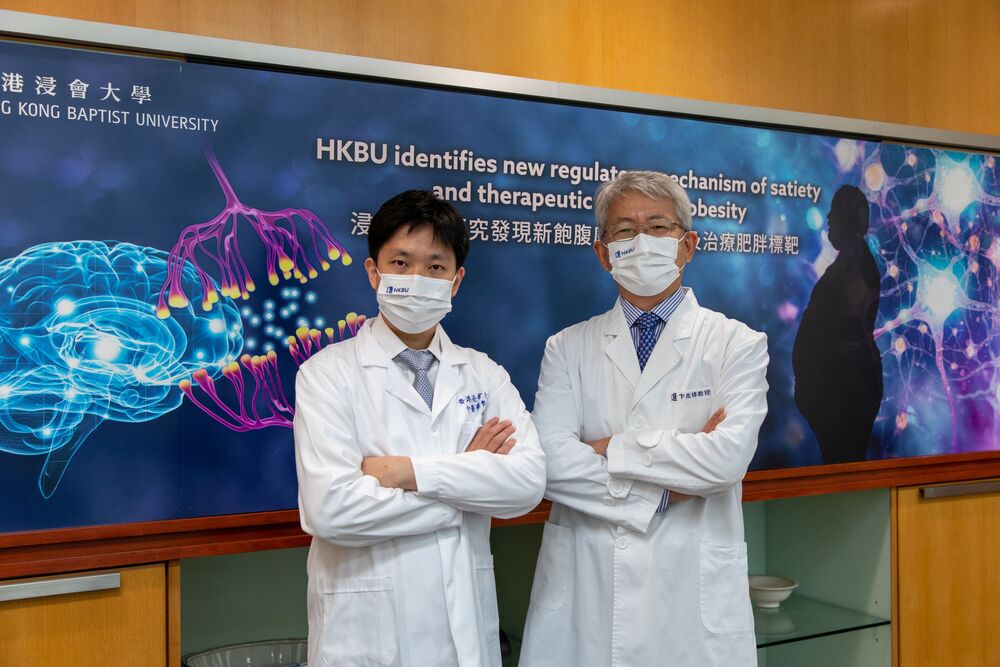 A research team led by Hong Kong Baptist University has found a proteolytic enzyme plays an important role in the regulatory mechanism of fullness, or satiety, and it could serve as a promising potential drug target for the management of obesity.
Being overweight, especially to the extent of obesity, exposes people to a higher risk of life-threatening diseases such as cardiovascular diseases, diabetes, and cancer.

Identifying a factor that specifically controls body weight, and investigating how it regulates our sense of satiety, is crucial for the development of therapeutic approaches for obesity.

A research team led by Dr Xavier Wong Hoi-leong, Assistant Professor of the Teaching and Research Division of the School of Chinese Medicine (SCM), and Professor Bian Zhaoxiang, Director of the Clinical Division of SCM and Tsang Shiu Tim Endowed Chair of Chinese Medicine Clinical Studies at HKBU, identified a proteolytic enzyme called membrane-type 1 matrix metalloproteinase (MT1-MMP) which regulates the mechanism of issuing satiety signals in the human brain.

Growth and differentiation factor 15 (GDF15) is a hormone that sends out satiety signals by binding with the neuron receptor in the hindbrain called GDNF-family receptor α-like (GFRAL). Mediation of GFRAL can therefore affect the ability of GDF15 to send satiety signals, and thus help regulate food intake. From this starting point, the research team conducted a series of experiments to investigate the mediation effects of MT1-MMP on GFRAL.

The team generated an obesity mouse model by feeding a fat-rich diet to a group of transgenic mice with a depletion of MT1-MMP in their satiety neurons, as well as a control group of ordinary mice. After 16 weeks, the mice with depleted MT1-MMP ate 10% less food, gained 50% less weight, and exhibited reduced glucose and plasma insulin levels compared to the control group.

The results show that depletion of MT1-MMP protects mice from obesity induced by a high-fat diet.

The research team also found that the obese mice displayed an increased activity of MT1-MMP in the Area Postrema and Nucleus of the Solitary Tract, the brain regions involved in appetite and weight regulation. The finding suggests that increased MT1-MMP activity in the brain of obese mice could be a risk factor causing sustained weight gain.

The researchers also explored the therapeutic potential of targeting MT1-MMP for obesity management, in particular through pharmacological inhibition of its activity in vivo. With the application of a specific neutralising antibody that inhibits MT1-MMP, significant improvements in metabolic parameters including food intake, glucose tolerance and body weight in obese mice were observed.

The results suggest that MT1-MMP is a potential therapeutic target that could be used in the development of innovative drug treatments for obesity.

Dr Wong said: “Pharmacological inhibition of MT1-MMP could be a viable strategy for the development of effective pharmacotherapy for the treatment of obesity.”

The research findings were published in the internationally-renowned scientific journal Nature Metabolism. The study has also been featured as a research highlight in multiple high-impact journals, including Nature Reviews Endocrinology, Nature Metabolism and Science Signaling.
Add Comment