A favorite of celebrities like Meryl Streep and Natalie Portman, he rejuvenated Lanvin and had recently started his own brand. He died of Covid-19.

The fashion industry is mourning the loss of Alber Elbaz, a highly esteemed figure, a Moroccan-born Israeli fashion designer who rejuvenated Lanvin and had recently started a new venture, AZ Factory, who succeeded Yves Saint Laurent as designer of the label’s Rive Gauche line but is perhaps best known for elevating Lanvin into a more prominent house during his 14-year tenure as creative director.

From 2001 to 2015, the Israeli-Moroccan-born couturier experimented with dresses made from a single seam and which effortlessly toed the line between classic and modern. His rigorous attention to detail and masterful tailoring was the stuff of legend, and belied his ebullient demeanor and simple raison d’être of making the wearers of his clothes feel special.

Despite Elbaz’s beloved reputation and numerous accolades, including the CFDA’s 2005 International Award and being named one of Time’s 100 Most Influential People in 2007, he often clashed with Lanvin owner Madame Wang over the brand’s lack of an “It Bag” within a fickle fashion market often fueled by accessories. His abrupt departure from the French label was acrimonious, well-documented, and controversial—he embarked on a five-year hiatus marked by global travel before launching his own brand, AZ Factory, in January, on his own terms.

Backed by Swiss luxury company Richemont, AZ Factory strives to make reasonably priced clothes that solve women’s problems and eschew fashion-industry trappings of season and size. Johann Rupert, the founder of Richemont, released the following statement about Elbaz’s death: “I’ve lost not only a colleague but a beloved friend. Alber had a richly deserved reputation as one of the industry’s brightest and most beloved figures. I was always taken by his intelligence, sensitivity, generosity, and unbridled creativity. He was a man of exceptional warmth and talent, and his singular vision, sense of beauty, and empathy leave an indelible impression.”

Elbaz’s passing comes as the fashion industry is still reeling from the recent death of Kenzo Takada, also of Covid-19. For a little-known fact about Elbaz that may leave you with a smile, we recommend visiting Maison Bonnet, the Parisian workshop where he ordered much of his statement eyewear.

Beloved not only by his celebrity clients like Meryl Streep and Natalie Portman but also by his peers, Mr. Elbaz was that rare character in fashion: a truly empathetic and generous designer, both in the clothes he made and in the way he conducted himself within the business. The graceful lines of his dresses mimicked the graceful lines of his life.

“Alber always thought of fashion as an embrace of life at its best,” said Anna Wintour, the global chief content officer for Condé Nast and editor of Vogue. “And when we wore his clothes, or were in his wonderful, joyful presence, we felt that, too.”

Designers like Pierpaolo Piccioli of Valentino and Stella McCartney all paid tribute to what Mr. Piccioli called one of fashion’s “biggest treasures.”

Mr. Elbaz had launched AZ Factory after a five-year hiatus following his abrupt firing from Lanvin, where he was fashion director from 2001 to 2015. During his time there, he turned Lanvin, the oldest surviving but dusty French fashion house, into a more modern and prominent brand whose creations were worn by the likes of Beyoncé, Lupita Nyong’o, Pharrell Williams, Michelle Obama and Harry Styles.

Mr. Elbaz was known for his self-deprecating humor and his insecurities. He had a fraught, public relationship with his weight and said that being skinny was a fantasy that influenced his work. He transformed that fantasy into lightness, he said, by turning his creations into comfortable and sometimes subtly eccentric clothes.

Ms. Portman once called him the “ultimate fashion philosopher-mentor.”

“He says things to me like: ‘Wear flats. You’re short. It’s much cooler not to pretend,’” Ms. Portman told Time magazine in 2007, when it named Mr. Elbaz one of the world’s 100 most influential people.

In recent years he had become something of a one-man advocate for reform of the fashion system and the pressures increasingly placed on designers.

As he said in 2015, as he received the Fashion Group International award, “We designers, we started as couturiers,” asking: ‘What do women want? What do women need? What can I do for a woman to make her life better and easier? How can I make a woman more beautiful?’”

Then, he said, “we became creative directors, so we have to create, but mostly direct.”

“And now,” he continued, “we have to become image-makers, creating a buzz, making sure that it looks good in the pictures. The screen has to scream, baby. That’s the rule. Loudness is the new cool, and not only in fashion, you know. I prefer whispering.”

The world of intricate dresses, cat walks and red carpets was one that he embraced publicly but remained wary of.

“You have to go back to nothing in order to maintain the dream,” Mr. Elbaz told The New Yorker in 2009. “The moment the dream becomes reality and you start to mingle too much with all these people—” He left the comment unfinished.

Still, luxury clothes came with a price that he readily justified. He once compared a fashion collection to a vaccine — an easy product to duplicate, but not something cheap to create.

Albert Elbaz was born in Casablanca, Morocco, on June 12, 1961, and grew up in Israel. His mother, Alegria, was a painter, and his father, Meyer, a colorist in a hair salon. Though he dreamed of becoming a doctor as a child — he always called himself a terrible hypochondriac — fashion proved a better route to helping people.

After studying design at Shenkar College of Engineering, Design and Art in Tel Aviv in the mid-1980s and a brief stint in the Israeli army, he moved to New York, where he removed the T from his first name so that it would not be mispronounced, and because “Alber Elbaz,” he thought, made for a more balanced brand name.

His survivors include a brother and two sisters as well as his partner, Alex Koo.

In New York, Mr. Elbaz became the assistant designer of Geoffrey Beene. He then moved to Paris in 1996 to become the head of prêt-à-porter design at Guy Laroche. Two years later, Yves Saint Laurent chose Mr. Elbaz to take over as his heir, designing the women’s Rive Gauche ready-to-wear collections for YSL.

That dream, however, was short-lived, as Gucci Group bought the brand in 1999 and Mr. Elbaz was soon fired in favor of Tom Ford. It was a crushing blow and started Mr. Elbaz on his journey questioning fashion.

In 2001, he met Shaw-Lan Wang, a Taiwan-based, Chinese-born former media mogul who was part of a consortium that had purchased Lanvin, and persuaded her to “awake the sleeping beauty,” as he put it. Their partnership led to an aesthetic flowering as Mr. Elbaz experimented with dresses made from a single seam and clothes that managed to be both generous and elegant, straddling the line between classicism and modernism.

“Alber would always tell me, ‘I am just a dressmaker’,” said Ms. Wintour of Vogue. “He was, if by that we mean someone who had the enviable ability to make something women would love to wear — and an incredible instinct for how they would want to feel when they were wearing it.”

Mr. Elbaz received the International Award from the Council of Fashion Designers of America in 2005 and was named one of Time magazine’s 100 Most Influential People in 2007. In 2016, the French government named him an Officier of the Légion d’Honneur.

Aside from a hit sneaker, however, Mr. Elbaz never quite managed to create the It bag that could power a brand forward in a world driven by accessories, and after repeated clashes with Madame Wang over the future of Lanvin, he was fired, to the shock of the industry.

For the next five years Mr. Elbaz wandered the world, taking meetings in Silicon Valley and Switzerland, dipping in and out of collaborations with brands like Tod’s and Le Sportsac, and trying to decide what to do next.

His answer was a new brand, AZ Factory — which was backed by Richemont, the Swiss luxury company — based on the idea of making clothes to solve women’s problems, at a more accessible price, sold directly to them, without heed of season, size or dictat, using technology at the service of beauty.

“I asked myself, ‘If I was a woman, what would I want?’” Mr. Elbaz told The New York Times in January. “Something that is first comfortable. Something fun. Something that lets me eat a big piece of cake.”

That allowed him to create the most simple things he had ever made, he said — although he had also compared the formation of his new brand to giving birth.

“My hormones are burning,” Mr. Elbaz added. “I’m so itchy. I cry and laugh within seconds.” Still, he said, he was thrilled to be back. 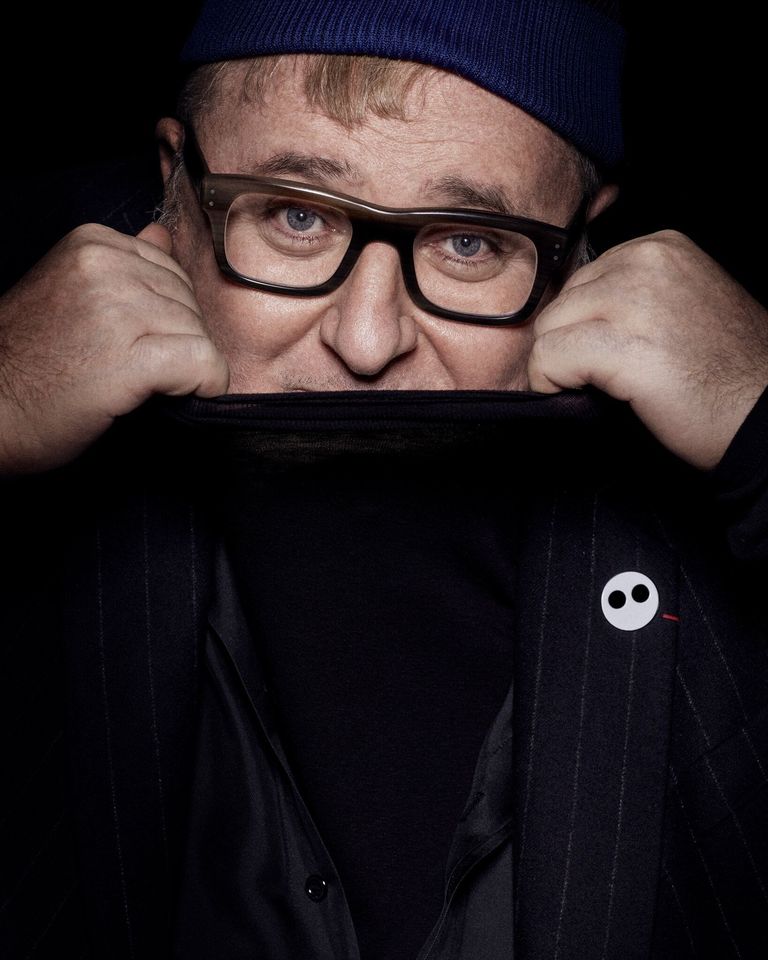