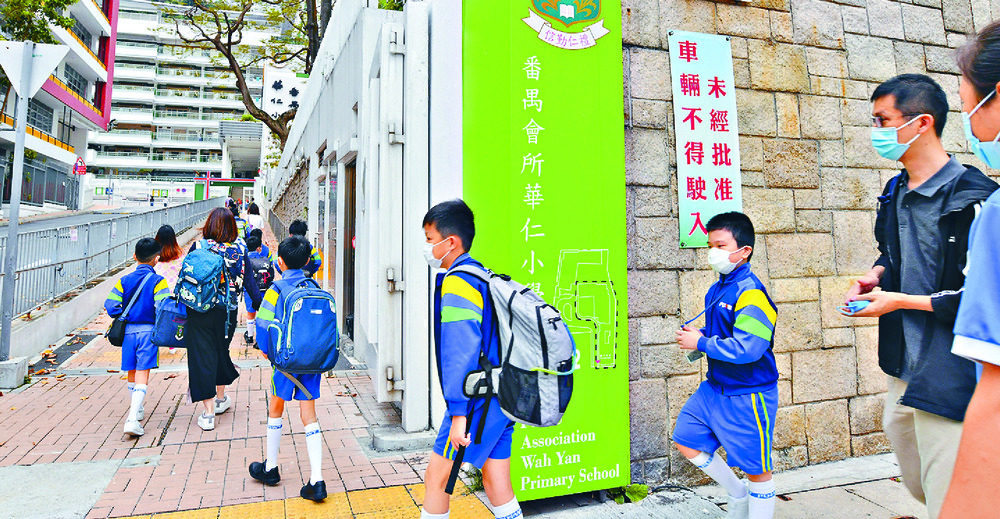 Relief as more go back to school

Parents were relieved to see their children go back to school for face-to-face classes, as some schools reopened yesterday to receive two-thirds of their students after the five-day Easter holiday.
One of them was Pun U Association Wah Yan Primary School in North Point, where primary three to six students started classes yesterday and primary one and two students today.

A father of a primary four pupil, Yung, said his son can now go to school three days a week and added that he felt relieved.

"Online classes are not as good as face-to-face classes because his mom has to monitor him. It would be very exhausting if online classes last for another year, as we have to check on whether he is loafing around," Yung said.

The grandfather of a primary three pupil, Wong, said he is confident about his grandchild returning to school as it has prioritized anti-epidemic measures.

"I'm not worried. Now other children are also paying attention to doing their best in anti-epidemic prevention. The school also attaches importance to it," he said.

The Education Bureau has announced that kindergartens, primary and secondary schools can have more students return to school on a half-day basis after Easter, with the cap on the number of students going from a third to two thirds.

Pun U Association Wah Yan Primary School's bell rang at 7.35am yesterday, but many pupils were already there by about 7am.

Among them were the Ho brothers. The primary three and primary six duo said they were happy to return to school and had brought sanitizers and spare masks.

The school was notified at the end of last month that 11 of its pupils were required to quarantine, as all had participated in a football training program outside school that saw a coach test positive soon after.

The pupils - eight from primary one and three from primary two - completed their quarantine Sunday and tested negative. The school said the coach - a 22-year-old Baptist University student - has recovered.

"To ensure students have a healthy, clean and safe environment, we have stepped up disinfection and cleaning of school premises during Easter," the school said on its Facebook page on Tuesday.

It has also provided tips for students to follow when returning to school yesterday, such as not sharing food or stationery with others and bringing hand sanitizers.

Meanwhile, the Education Bureau yesterday said over 1,500 schools have applied for a whole-school resumption of half-day face-to-face classes, under the condition they would arrange for all teachers and staff to take regular Covid-19 tests. That is around 100 more schools than the March 19 figure announced earlier.

Of these, about 790 are kindergartens, 550 tutorial schools and 190 primary and secondary schools.
#COVID-19  #Covid  #Facebook
Add Comment