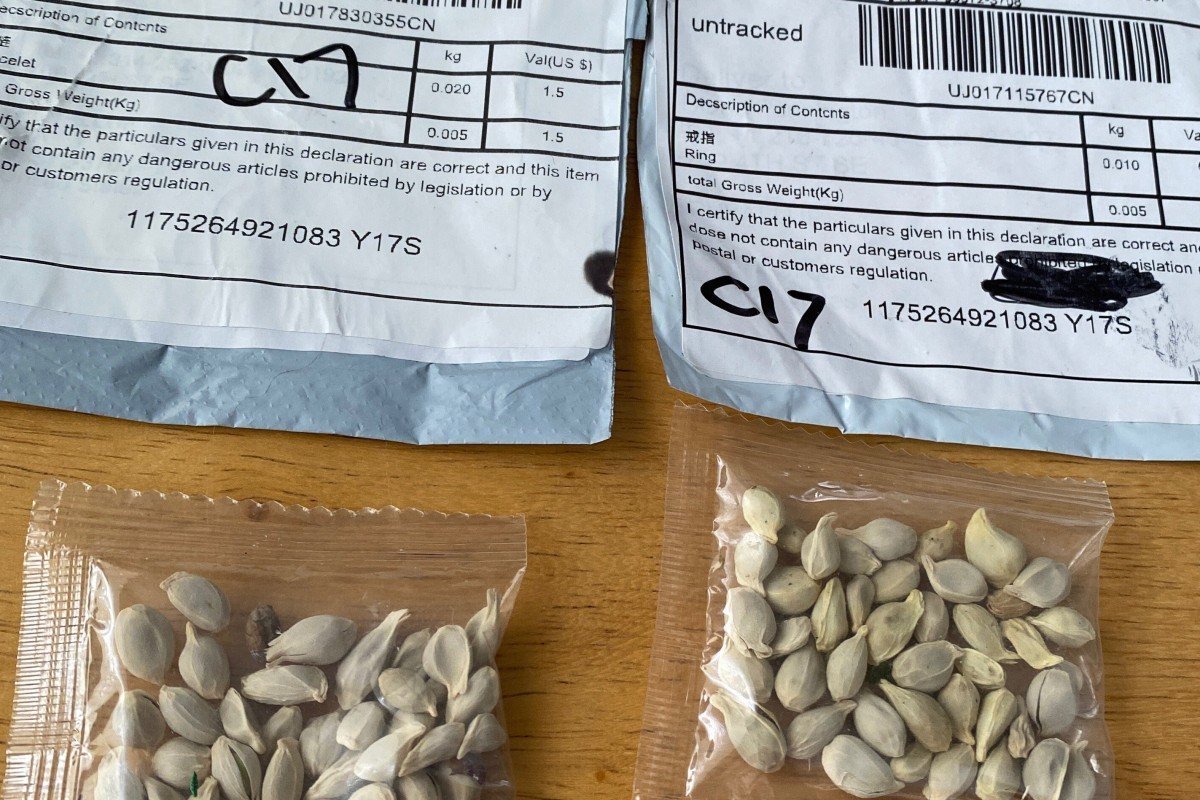 Recipients warned not to plant mysterious, unsolicited seeds mailed to US from China

Packages labelled as jewellery or toys, which have been received in at least 9 states, actually contain unidentified seeds. Agriculture officials urge residents not to put seeds in the ground because of the risk of introducing invasive species

Mysterious seeds from China have been arriving by mail to unsuspecting recipients in at least nine US states, according to warnings issued by local agriculture departments in recent days.

With tensions between the two countries already soaring, the strange influx of unidentified seeds, landing in the American heartland via the Chinese postal service, may be sowing even more distrust into the rapidly worsening US-China relationship.

“At this point in time, we don’t have enough information to know if this is a hoax, a prank, an internet scam or an act of agricultural bio-terrorism,” Kentucky agriculture commissioner Ryan Quarles said in a statement.

Whatever the reason the seed packets were sent – some were labelled as jewellery, others as toys – state agriculture officials urged residents not to put them into the ground because of the risk of introducing invasive species into the US.

Seed mystery: Residents in #Virginia (and also in #Utah) report receiving unsolicited packages containing seeds in the mail that appear to have originated from #China. Authorities warn that the seeds should not be planted. https://t.co/zV5BncnLkv

“DO NOT plant them,” the Washington State Department of Agriculture urged its residents on Facebook.

State authorities asked people who received the seeds to report them to the government.

“Right now, we are uncertain what types of seeds are in the package,” said Mike Strain, the commissioner of the Louisiana Department of Agriculture and Forestry. “We need to identify the seeds to ensure they do not pose a risk to Louisiana’s agricultural industry or the environment.”

Some of the explanations given were more benign – at least in geopolitical terms.

The police department in Whitehouse, Ohio, said on Facebook that it thought the seeds might be part of a “brushing” scam – essentially a guerilla marketing practice in which a business sends its product to unsuspecting recipients, then writes fake reviews posing as the “customer”.

The Ohio Department of Agriculture posted a photo of a package sent from Suzhou, China. It included a packet of seeds that some commenters on the department’s page said looked like sunflower seeds.

“I’d plant them, they look like some sort of sunflower,” one commenter said.

In response to Washington state’s warning about the seeds, one Facebook user in Texas posted a picture of a package she said she had received unexpectedly. The package was also sent from Suzhou, via China Post, and said it contained a “bracelet”.

“I got these 2 wks ago,” she wrote. “The pkg inside says cucumbers.”