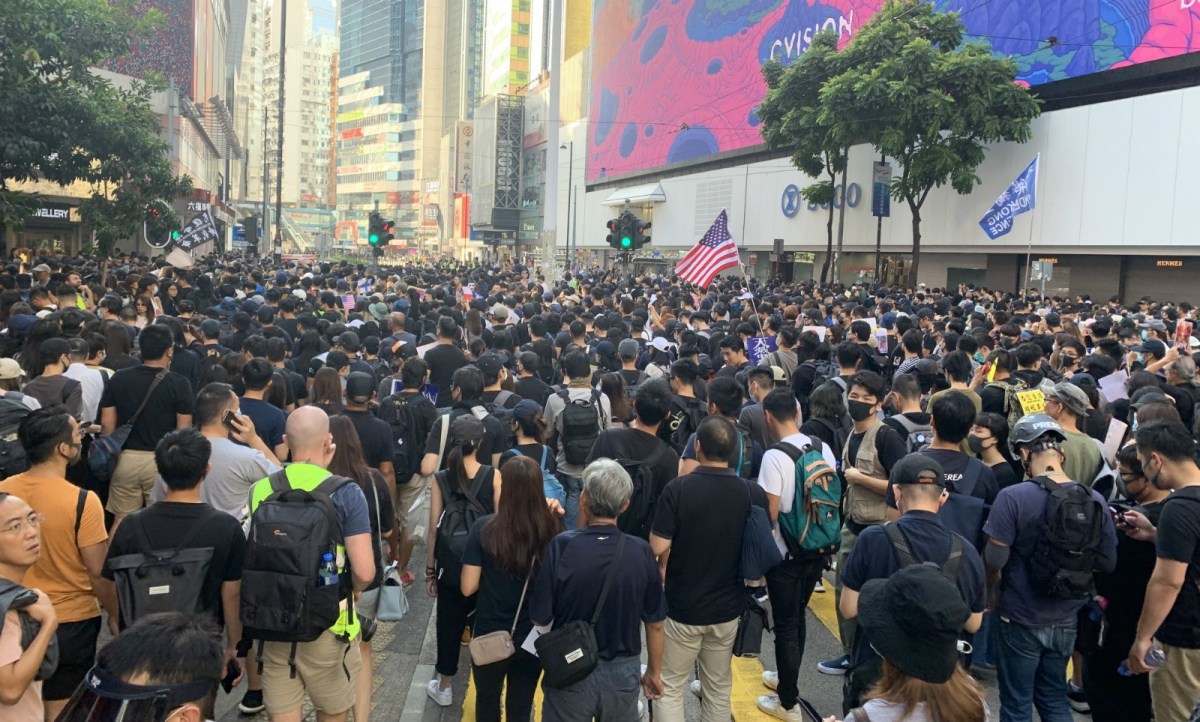 Former chief executive warns opposition groups not to underestimate Beijing’s determination to impose its will
Anti-extradition protesters will return to the streets on Sunday to oppose Beijing’s plan to impose a national security law in Hong Kong.

Over the past week, netizens have been calling on Hong Kong residents to gather in Causeway Bay at 1 pm on Sunday to protest against the National Anthem Law, which will be discussed and voted on on May 27. They said people can choose to walk from Sogo in Causeway Bay to the Southorn Playground in Wan Chai or the other way round. The protest was not approved by the police and is likely to be categorized as an “illegal assembly.”

After Beijing announced on Thursday its plan to implement the national security law for Hong Kong, several groups of protesters said in a joint statement on Telegram that all Hong Kong residents should join the Sunday protest as it will be the first large-scale rally held in response to the pending national security law.

A Facebook page named “Hkerschedule” reminded participants to be careful because the police have arrested people participating in previous unauthorized protests.

Citizens’ Press Conference, formed by a group of anti-extradition protesters last year, said in a media briefing on Friday that Hong Kong protesters will continue to fight for the city’s human rights and democracy until the last minute. Its spokesperson, surnamed Chan, described Beijing’s move to implement the national security law as “crude and untimely,” as officials “no longer have any consideration for optics or morals, but expansionism and the engulfment of the rules-based international order.”

Chan also said Hongkongers should safeguard their rights or the city will become another Tibet or Xinjiang province.

According to previous unauthorized protests, police started intercepting people and checking their ID cards near the protest site one or two hours before the demonstration began. In some cases, they ordered the MTR to shut down the stations near the protest site. When people started walking on the roads, police immediately dispersed them.

Since police were granted the power to issue fine bills to people who broke the social distancing rules by gathering with more than four people from late March, 547 people had been fined as of May 9. The government then loosened the rules by allowing gatherings of up to eight people in public places but extended the rules to June 4.

The Hong Kong Alliance in Support of Patriotic Democratic Movements in China said the government extended the social distancing rules in order to stop this year’s June 4 vigil, which will be the 31st event since the 1989 Tiananmen Square Incident. He said it’s unreasonable to ban political rallies while school classes and religious activities are permitted to resume in late May.

In recent protests, police were accused of misusing the social distancing rules to disperse protesters, who were singing the Glory To Hong Kong in shopping malls. On Friday, 20 members of the Democratic Party were fined HK$2,000 (US$258) each as they held a protest in front of the central government’s Liaison Office building.

A group of Hong Kong people in Taiwan said they planned to hold a vigil at Liberty Square in Taipei at 8pm on June 4.