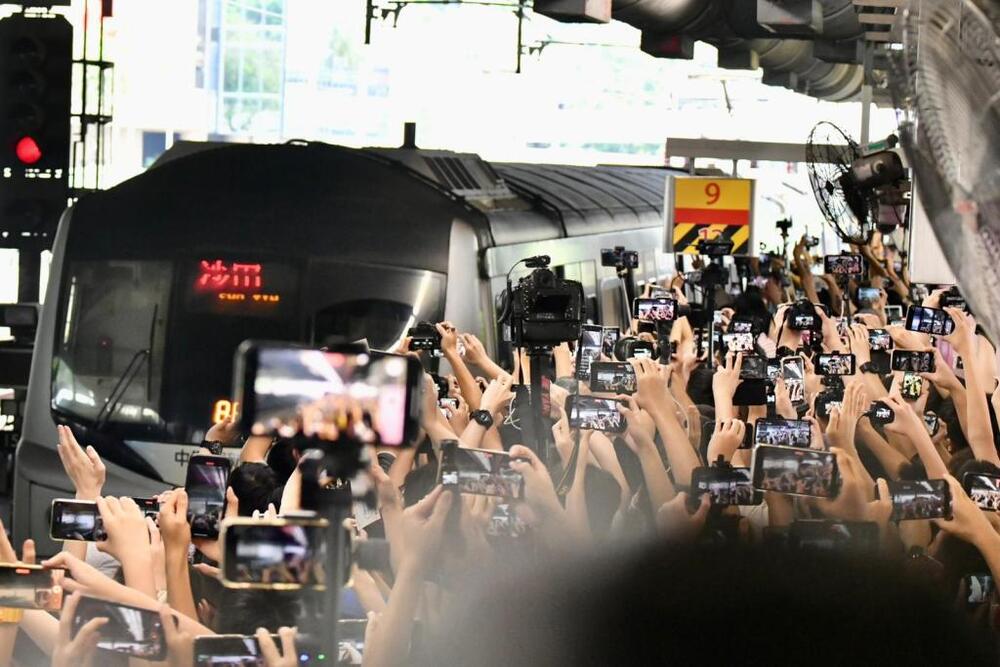 Many railway fans have on Friday bid farewell to one of their beloved electric train models - the Mid-Life Refurbishment Train, which has served the city for 40 years, as it will go into retirement to make way for the launch of the Sha Tin to Central Link.
The 12-car train, nicknamed the “fly-headed train” for its vague resemblance to the insect, has run its final journey on the East Rail Line this afternoon, since going into service on the exact same day 40 years ago.

For railway fans in Hong Kong, MLR-trains were a cherished legacy from the Kowloon–Canton Railway era, which came into service in October 1910 when the city was still under British colonial rule.

The last MLR-train departed Hung Hom station for Sha Tin at 1.09pm, with fans on board enjoying the train’s last ride.

A special broadcast was in place during the ride to introduce to passengers the history of the MLR-train, also noting the ride will be its last mission in Hong Kong.

The train made a brief stop after arriving at Sha Tin station, allowing fans to cherish the moment with each other and take photos with the KCR-style train.

The MTR also threw a “retirement party” for the train at the platform and sang a birthday song for the 40-year-old train with railway fans.

The MTR Corporation’s operations director, Tony Lee Kar-yun, said it is remarkable to see the “retirement” of the iconic train on the same day as its 40th birthday.

Lee noted the decommission of the train also signified a new era for the century-old East Rail Line as its cross-harbor section came into service, providing citizens with better access to different parts of Hong Kong.

He also said the recyclable components of the retired trains would be dismantled in accordance with guidelines from the Environmental Protection Department and relevant laws.

“The company may also donate some components to community partners for educational purposes through the “Legacy Train Revitalisation Programme,” he added.
Add Comment