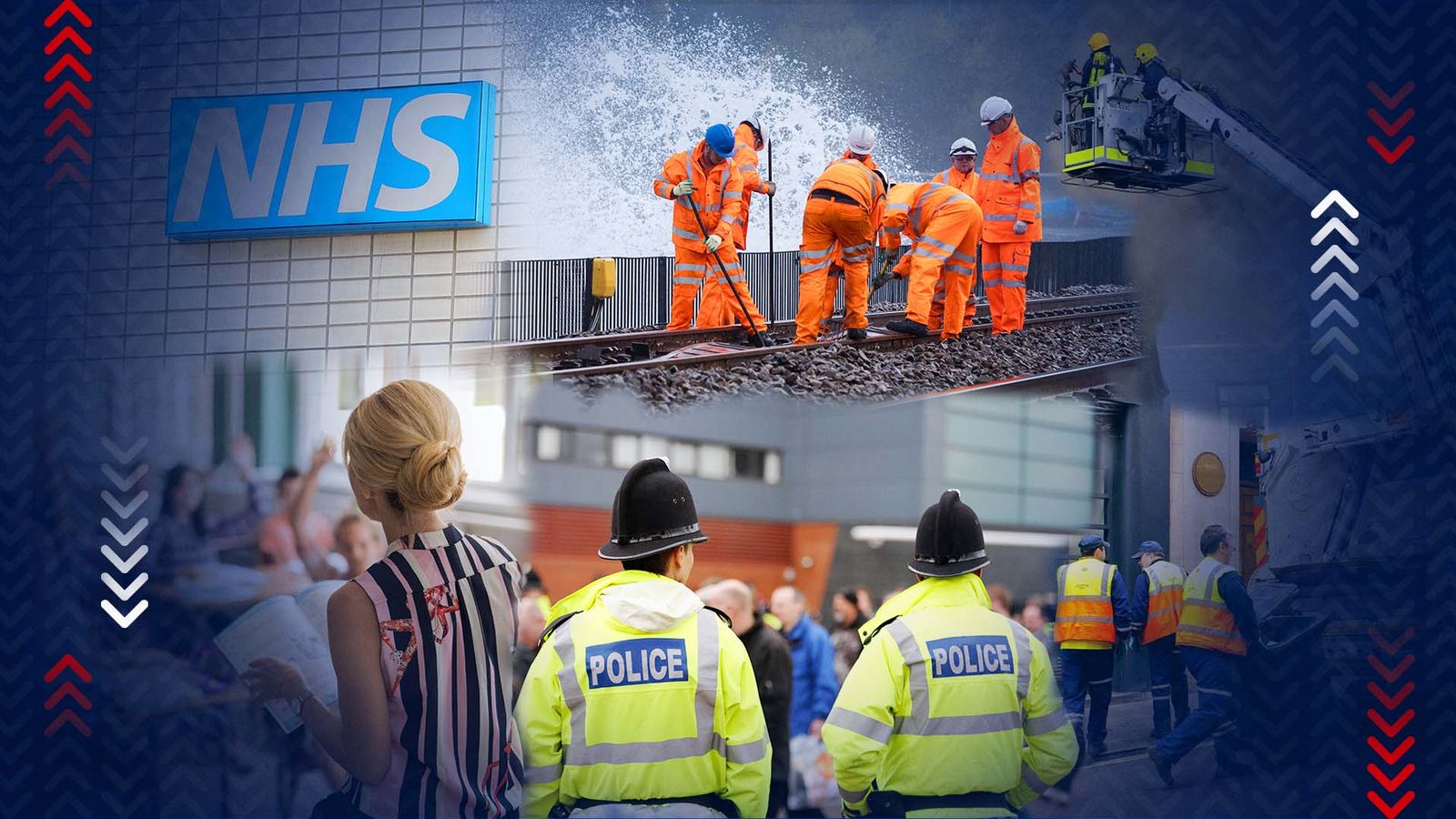 Striking rail workers are asking for a 7% pay rise, despite CPI inflation at 9.1% and RPI at 11.7%. NHS workers and teachers have also threatened to walk out if the government doesn't up their pay deals.

This week's train strikes, involving 40,000 workers and three days of disrupted travel, are the worst in three decades.

Members of the RMT (Rail, Maritime and Transport Workers) union are calling for a 7% pay rise - which is below the latest inflation rate of 9.1% - but far above the 3% that has been offered so far.

Such wide scale industrial action has seen other public sector workers threaten to walk out - including teachers, doctors, and nurses.

They say that if the current cost of living crisis is not factored into this year's pay deals, it will lead to further disruption across multiple sectors and even more staff leaving their professions.

Here Sky News looks at what different public sector roles are paid, how they have fared with inflation, and what their demands are.

How is public sector pay decided?

Around 5.4 million people work in the public sector in the UK, across 300 different jobs, according to the latest figures from the Office for National Statistics (ONS).

Ultimately, the chancellor decides how much money should go towards paying public sector workers and sets maximum pay rise levels across all sectors.

During the pandemic, Rishi Sunak froze public sector pay to help fund emergency schemes such as furlough and VAT holidays.

But as of April this year, public sector pay has returned to normal, with Mr Sunak allowing the government to give out increases of up to 3%.

Each sector has a pay review body that carries out an annual report, which the relevant government department will then use to determine final pay rises.

Figures show that across the board, public sector workers have seen their pay fall by 4.3% in real terms since 2010 - compared with a 4.3% increase for their private sector counterparts. 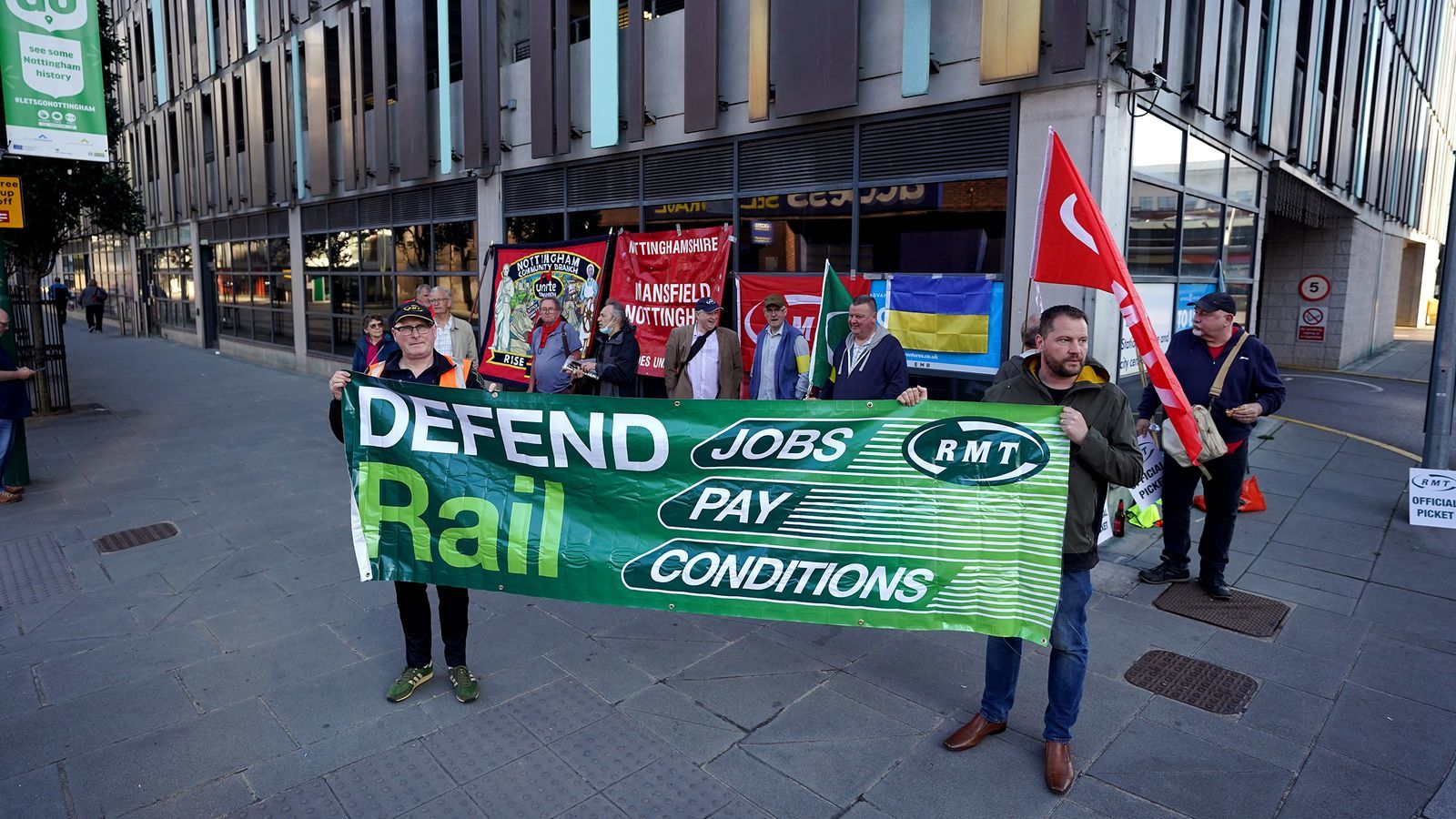 Although many rail workers are employed by private companies (train operator companies or TOCs), those firms have to secure 'passenger service contracts' from Network Rail - the arm's length public sector body responsible for managing Britain's railways.

Essentially, those 34 train companies lease the stations and part of the rail network their services run on.

The rail workers walking out this week are largely train guards, ticket collectors and station staff - all represented by RMT.

They want a 7% pay increase, but are only being offered 3% by the Department for Transport (DfT).

ONS figures put the average rail worker salary at £43,747 - but this includes train drivers and rolling stock engineers who are higher paid and are not part of RMT.

The union says that if these higher-skilled and higher-paid roles are taken out of the equation, the average salary across the sector is £33,000.

More specifically, it estimates the following roles get: 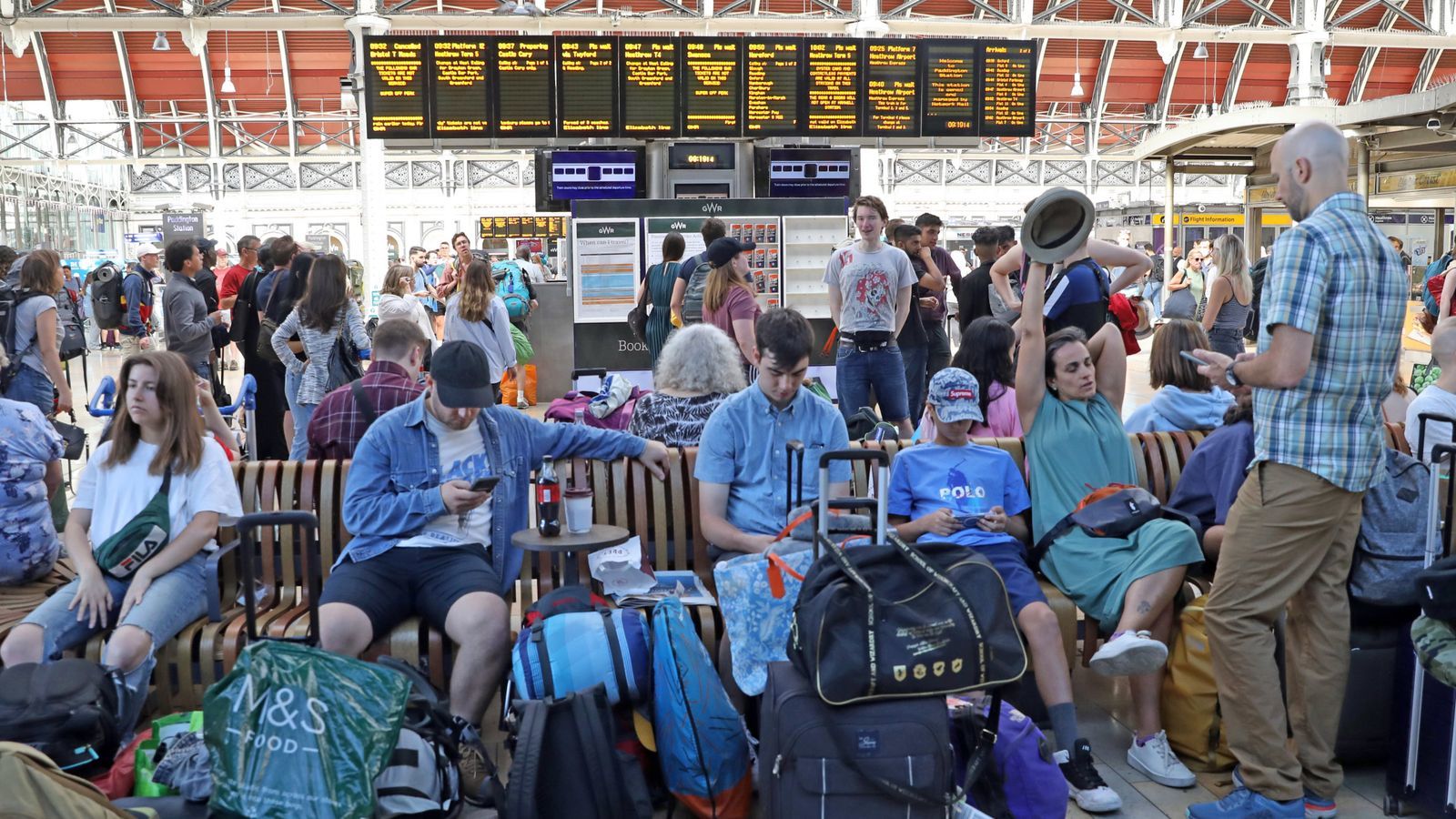 Teaching unions, including the NEU (National Education Union), NUT (National Union of Teachers) and NASUWT (National Association of Schoolmasters/Union of Women Teachers), are calling for a 12% pay increase.

They say this is because RPI (retail price index) inflation, which takes mortgage interest payments into account - so is usually higher than CPI, hit 11.7% in late-June.

In September this year, it also proposes increasing main scale teacher pay by 8.9% and upper scale pay by 3%.

In September 2023 it puts forward another increase of between 7.1% and 2% for main scale teachers and 2% for upper scale ones.

But the unions say this will still result in real-terms pay cuts for a lot of staff.

Although it will provide a 5% real-terms increase for teachers starting out, they claim more experienced teachers face 5% real-terms cuts as a pay-off.

The NEU has threatened strike action in the autumn term if the government does not meet its demands.

After the pandemic pay freeze was lifted, the government offered NHS staff a 3% pay rise, in line with public sector guidance, and plans to do the same this year.

There has been outrage from doctors and nurses who claim this amounts to a huge real-term cut - despite their efforts to keep the public safe during COVID.

The BMA (British Medical Association) says junior doctor salaries fell by 22.4% in RPI terms between 2008 and 2021.

At their annual conference last May, the BMA called on the government for a 15% pay rise for junior doctors - which was rejected.

Analysis by Unison suggests that the 3% rise will mean the following real-terms decreases from 2010:

People who work for national or local government will get a maximum pay rise of 3% this year, in line with the Chancellor's recommendations.

The FDA, the only union representing government workers, claims civil servants have suffered real-terms cuts of 10% over the past decade and are calling for well above 3%.

Starting salaries in the civil service - for either local or national government graduate schemes - range from £17,000 to £30,000.

Average civil service pay varies from around £51,000 at the Foreign, Development and Commonwealth Office (FCDO) to £24,000 at HMRC.

Police forces across England and Wales have been offered a "pay uplift of at least 2% in the financial year 2022/23".

This could be increased to the 3% set by the chancellor.

But the Police Federation says officers and other staff need a "huge hike" after real-terms cuts of up to 20% over the past 10 years.

While the union is calling for a better deal, police officers are banned from going on strike by the government to protect law and order.

The FBU (Fire Brigade Union) claims firefighters have suffered an average £4,000 real-terms cut in their salaries over the past decade.

Although firefighters are allowed to strike, the chief inspector of fire and rescue services last year said there should be a "consideration of the removal of the right of firefighters to strike" similar to the ones that apply for police and prison officers.

Members of the Armed Forces are currently awaiting the outcome of the latest Armed Forces' Pay Review Body report.

The Ministry of Defence (MoD) will then decide on what pay deal they get - around spring 2023.

By law, military personnel are banned from being part of a union or going on strike, so there are fewer public calls for an increase in pay.

Like rail workers, although refuse collection workers are employed by private companies, they are contracted by local councils.

Bin men and women have carried out various strikes around the country demanding better pay in recent years.

Biffa staff in Manchester walked out after they were offered a 1.75% pay rise - the equivalent of an extra 17p an hour.

In early-May, they secured a pay rise of between 11% and 22%, depending on their role.

Similarly, in Sussex, Biffa staff represented by the GMB union have this year negotiated a pay increase of between 24% and 27%.