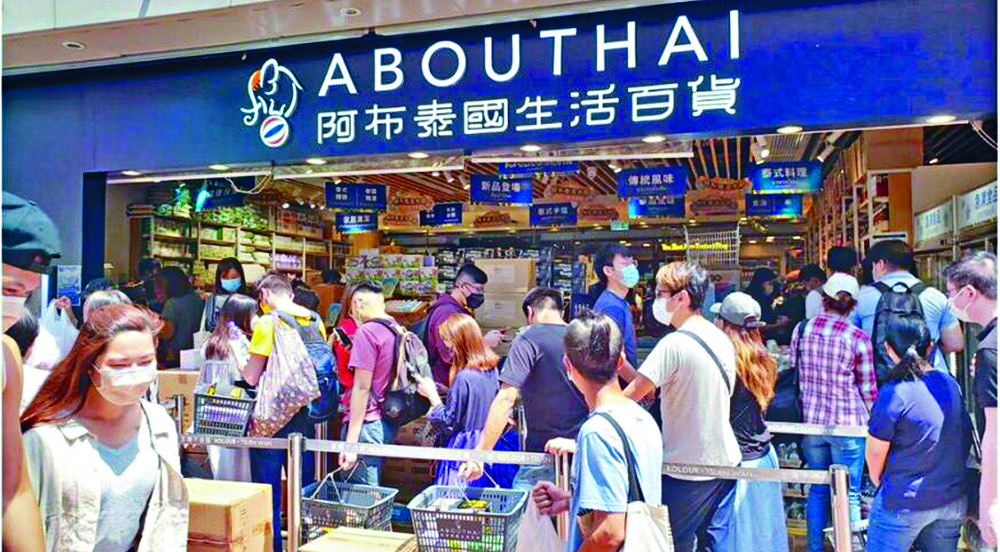 Supporters of the AbouThai retail chain founded by a former customs officer charged under the national security law continue to queue at its outlets after the business was raided by 100 customs officers Thursday.
Officers seized HK$400,000 worth of alleged mislabeled goods, including shower gels, detergents and bleach in the warehouse in Tsuen Wan and 25 stores in the city.

A 33-year-old male director responsible for operations who was arrested has been released on bail, but no charge has yet been laid against him.

People called on social media for people to support the chain. Other shops known to be part of the "yellow economy" such as Kwong Wing Catering also offered discounts for customers who had bought products from AbouThai.

Long queues have formed outside AbouThai shops in Tsuen Wan, Admiralty and Mong Kok since Friday.

Customs officers said the confiscated goods did not comply with the law as most only had warning labels in Thai and some in English but not in Chinese.

The chain was founded by Mike Lam King-nam, one of the 47 suspects charged under the security law over their involvement in an unofficial pan-democrat primary election last year.

Lam lost his job as a former probationary customs officer in 2015 after appearing in a Sha Tin protest.

In two Facebook posts Thursday, AbouThai apologized for its negligence in labeling and asked people who had criticized the customs operation to stop slandering the department.

"Hong Kong Customs has always committed to its motto of 'Serve the Community with Commitment and Excellence,' " a spokesman wrote. However, the chain said some of the goods seized had not been sold. The chain said it might be facing such "extreme prosecution practices" because of its political stance.

Some people also accused customs of "repression," with customs condemning that as a "malicious allegation."

Nearly 10,000 mislabeled goods were involved, said Vincent Chan Kwok-hung, acting deputy head of consumer goods safety, and the point of sales were all over 18 districts.

After Thursday's raid, some news media found many products in other retail stores did not have the specified bilingual labels.

One of the news media also asked Customs if there would be further inspections of these stores.

"We are still looking into the matter. Law enforcement action will be taken if any suspected violation is found," the department said.